In the energies of the Harmonic Concordance I had a workshop in my home. As always, each student came away with whatever they needed to move their consciousness into higher frequency and understand of the nature of reality and our experience here. If your grid aligned to these energies you would experience great changes, if not, it would bean evening of fun with like-minded friends.

Many people were coming full circle having connected with the energies of the Harmonic Convergence on August 16-17, 1987. As always, people were participating around the world to heal issues as we return to consciousness. It was the name given to the world's first globally synchronized meditation which also closely coincided with an exceptional alignment of planets in our solar system. The timing of the Harmonic Convergence was allegedly significant in the Maya calendar, with some consideration also given to European and Asian astrological traditions. The chosen dates have the distinction of allegedly marking a planetary alignment with the Sun, Moon and six out of eight planets being "part of the grand trine." Read more ...

The workshop began at 6pm, just as a lunar eclipse started. (See below) We took our places in the living room, adjusted the lighting, our crystals and tuning forks. Powerful energies had been building for days. Friends - Anna had come from the Kabbalah Center in Manhattan. George had spent the day at a workshop with a Peruvian Shaman. Bob had been part of another workshop, and so on as we each brought something to the gathering.

We began to meditate and chant. I could sense the energies of the readers of the column, and the endless numbers of souls out in the cosmos, above and below, joining us. We chanted in waves, not everyone chanting the same tone at the same time. This created a sine wave of energy. We used tuning forks and crystals to resonant the vibrations of what we were doing into the universe. We used our hands to create spirals of energy, and our bodies in the same manner. A blast of light was witnessed by 4 people in the room. Anna saw millions of golden keys given at this time.

Z guided the class on a meditation back in time to the beginning of the program, when a bloodline was created, the blue bloodline, that carries the sacred keys in its genetics. It was time to activate them. As the meditation continued....we saw the creation of a bloodline that we saw as blue, blue bloods. Their blood ran through the veins of many leaves on the Tree of Life. They then spread out across the planetary grid. On this night, this bloodline was ignited, as the blue moved in columns, waves, through their DNA activating their soul recording and creating balance.

After the meditation, which was more of an initiation, we took a short break as some people wanted to go outside and view the eclipse. As it was half way through, we were able to watch it through my large living room skylight.

When the class reassembled - 3 men and 3 women created a star tetrahedron. We held hands and began to chant. As we hit a higher harmonic I could see the digits with each chord, and spoke them out loud, 36, 72, at 144, I opened my eyes and peeked at the clock. It read 8:13. We were right on cue, Q.

We stood up and slowly moved counter-clock wise, chanting, eyes closed, holding hands, then at some point brought our hands together into the center, as if the core of a circle. We stopped walking and continued to chant. Again I saw something ignite and lots of symbols burst forth. I felt connection to the consciousness of creation and all that is. For those into digital triggers, the energies remain powerful as we move to 11:11 - another key code for souls triggered by digits.


In the days that followed, people told me about strange things they and their friends witnessed during the 6 day window for this solar eclipse of consciousness transition. Among them were a rainbow around the full moon, unexplained lights possibly UFOs, and temporal distortions as the grids changed.

I thoroughly enjoyed your Harmonic Concordance workshop Nov. 8th and felt that we successfully sent positive and healing energies to the tetrahedron grid. Also, the souls who attended your workshop are very talented and gifted sensitives with whom I felt comfortable with and connected to during and after the workshop.

I'm writing this email to tell you about an interesting occurrence I (and three of your other guests) had as we went outside to view the eclipse of the moon in NYC, which was spectacular.

As I was looking up at the orange-shaded moon waiting for the last sliver of it to be covered, I noticed a strange V-shaped pattern, or triangular shaped pattern of lights moving in the sky. I believe my comments, along with some of the others, were: "What's that?" "..that triangular shaped thing? "Do you see that?" We were all mystified.

This V-shaped object was very high up in altitude, like a plane, and moved just under the moon, towards it, then disappeared. The lights were somewhat translucent.

Many planes had passed through the crisp crystal-clear sky as I was viewing the moon for a duration of about 15 minutes. All of the other planes had very bright lights, took routine pathways and were easily identified as planes. This V-shaped, triangular object was quite different from the planes. It had more lights on it than a plane and the lights appeared transparent or translucent. And, it disappeared immediately, as it seemed to fly towards the moon. This triangular, V-shaped object was something else!

I don't know why I or any of the other three people didn't discuss this with you at length when we rejoined the group. I do remember asking if possibly a V-formation of ducks would be traveling in the dark at night. However, the energies of that night were very focused on the Harmonic Concordance and the question of UFOs would be another whole workshop. Perhaps, we (Earthlings) weren't the only beings sending good vibrations to the Universe that night??

I also attended your workshop on Saturday, and was out there with the three others from the class who saw the V-shaped object glide fairly quickly and effortlessly (from bottom of my camera "screen" straight up and across the moon). It was black in color except for the faint V row of lights. Unless one was staring at the eclipse, one would have missed the short video overlay. We all saw it and laughed happily that we had each other's Validation of the event. But I do agree with Linda's experience.

Just wanted to let you know that I was outside, in Atlanta, GA and witnessed the same V-shaped light formation move across the sky. I said to my friends "What is that...What is that?" and one commented that it was the veil being lifted. We kind of laughed it off but were still puzzled. I couldn't believe when I read your column this morning and found out that the same thing was seen in New York.

Just as solar scientists thought the Sun might be winding down
it has unleashed the biggest solar flare ever recorded.


The full moon eclipse began at 6:09 pm EST. The moon represents the feminine energies, the goddess, she who is returning, rebirthing a new reality based on balance and higher light. At 8:13 pm EST a geometrically perfect six sided, Star of David, configuration appeared in the sky, linking and balancing the energies of six astrological bodies; the Sun, Jupiter, Mars, Saturn, Chiron and the Moon. The interaction of this significant planetary alignment at the moment of the eclipse combines to produce a powerful alchemical transformation offering the opportunity for both personal and planetary shifts in consciousness.

This Grand Sextile astrological configuration, accompanying a total lunar eclipse, has never before occurred in recorded history. This is an immensely powerful vibrational activation that many throughout the planet see as a major Interdimensional gateway fulfilling ancient prophecies from different traditions and ushering in a new activation of energy upon the Earth. This extraordinary configuration is formed when six planets are distributed evenly around the circle in near-perfect symmetry. Even the untrained eye can easily discern the remarkable pattern in this chart, which is being called the Harmonic Concordance.

The Grand Sextile pattern is known as the Star of David formed by the two inverted Grand Trines which are interconnect. This pattern is also universally recognized as the three dimensional representation of the Merkabah, the Light Body Vehicle of Consciousness (a very important symbol for those working with Light energies). Another name for this planetary pattern is the "Seal of Solomon," which contains the promise of the advent of Divine Wisdom attendant upon this moment. Other pattern by-products of this tight Grand Sextile include: the three Mystic Rectangles, four Kites, and six Minor Grand Trines.

A grand trine is a planetary pattern wherein three planets are all trine to each other, forming a dramatic triangle in the chart. Grand trines are associated with free, easy, effortless energy flow among the three planets. In this case, one grand trine is in the Earth element and the other is in the water element. Earth signs tend to be realistic, hardworking and concerned with practical results. Water signs are generally compassionate, nurturing, imaginative and sensitive. Both Earth and water signs are considered receptive signs, more adept at taking in and processing emotions and information than initiating them. These grand trines represent a grounded, gentle process of integration.

These two grand trines link together in such a way that all the points of each triangle are connected in harmony. Each point is 60 degrees (a sextile) from the two adjacent points all the way around the circle. Sextiles indicate opportunities, but as such they require effort and action. The key point here is that all six planets work together in a coordinated fashion, with the prospect of a major breakthrough in consciousness. Finally, there are several oppositions in this planetary pattern. Oppositions indicate awareness, balance and the opportunity for integration. They also show a possible pathway for the outflow or distribution of the powerful energy of the grand sextile.

In this chart, planets (rather than fast-moving points such as the ascendant or mid-heaven) occupy each point of the grand sextile, showing that this pattern occurs everywhere on the Earth, independent of your location. It symbolizes an incredible opportunity for humankind to participate consciously in furthering our evolution as a species.

An eclipse represents the opening of an eye.

The eye is a metaphor for the source of creation. 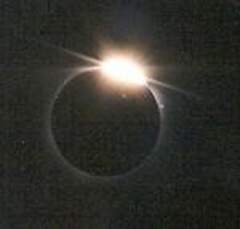 Diamond Ring Effect
As is Above, So is Below

The Harmonic Concordance was about activation of DNA, the spirals of light through which you experience. The keys have been activated, the flame of a new creation ignited, the crystalline grid ushers in the harmonic. Listen for the tones. Feel them resonant throughout your body. Expand your consciousness to the infinite. This is one step in the spiraling ladder of our DNA activation in the alchemy of time. 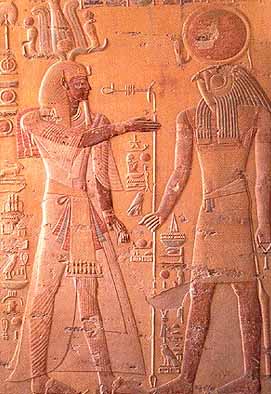 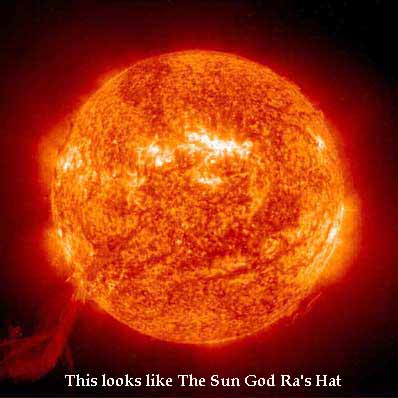 
The Harmonic Concordance was supposedly linked to 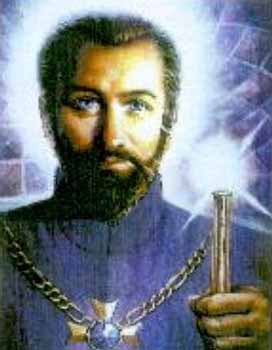 Alchemy of consciousness into the next harmonic