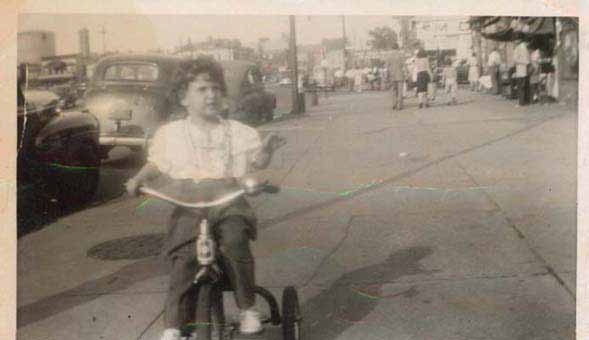 March 14, 2003: The dream began with my friend Ron and I looking down at me as a child in Coney Island, riding my tricycle. There is something about Coney Island, rods and cones and 12 Around 1 geometry. 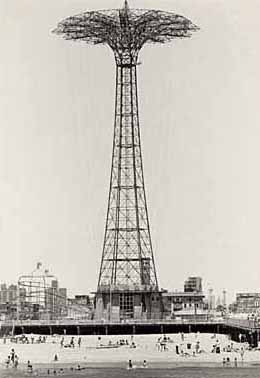 Ron and I flew over the parachute jump. The top was giving off waves of electromagnetic energy bringing to mind the work of Nikola Tesla, the Tesla Tower, Tesla Coils, and Tesla's Tower of Dreams. Tesla died on January 7, 1943, one month before I was born. Tesla was connected to white pigeons which I have been seeing. 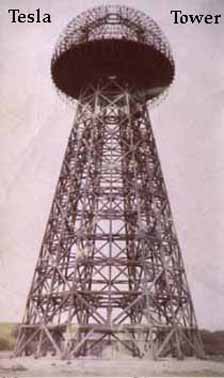 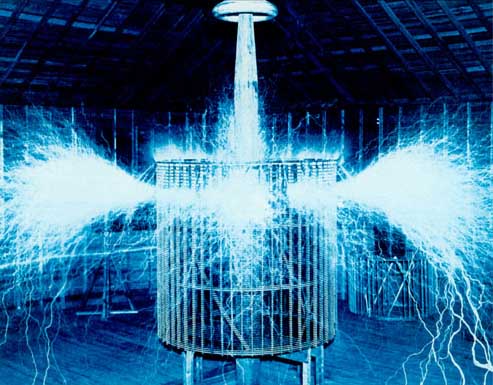 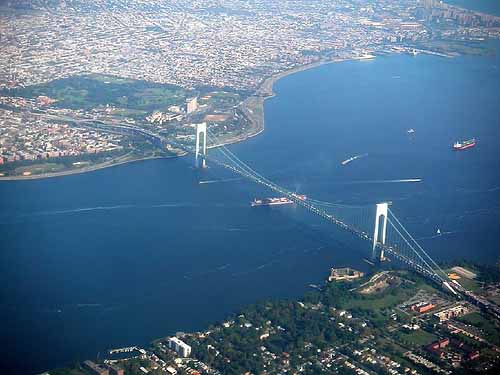 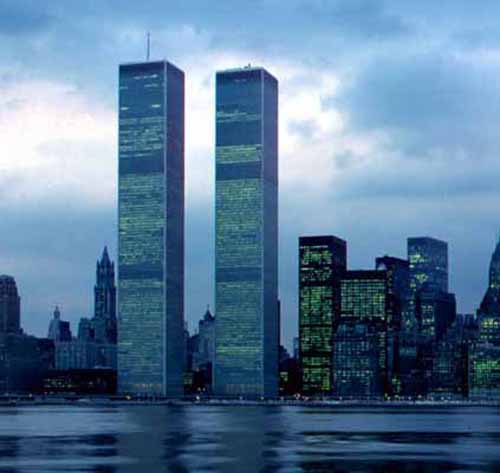 The dream progressed to 1972 and the Verrazano Bridge. Ron and I watched electromagnetic energy flowing between the twin arches of the bridge. Looking in the direction of the Twin Towers of the World Trade Center, we saw the same electromagnetic energy flowing between the towers. We also realized that though the Twin Towers are no longer physical, somewhere they may still exist. When they imploded in our reality, it created a subliminal message to the souls about merging our twin aspects. Ron concluded that energy flows between objects and people in a networking grid system above and below, and that Tesla, and all of this, links to time travel and experiments conducted during World War II in Germany.

We wait for the war with Iraq to begin. I do not feel fear in my soul, almost as if this is a non-reality for me, but sense great change as a result. War leaves an imprint on the matrix of the creational blueprint, which bring us from one program to another. If only this program allowed us to view its true creation. Then again, if that were so, most of us would leave and say it's ridiculous. Some of us are here to experience the heart, love, romance, sex, as long as that lasts with your partner, the emotional high before the program gets in the way and 'throws up' obstacles. We are used to that, and play along, every now and again, grabbing for the 'gold ring' as the carousel, the ferris wheel, the wheel of time and karma, the carnival of the trickster, moves us round and round, often leaving us dizzy and confused. 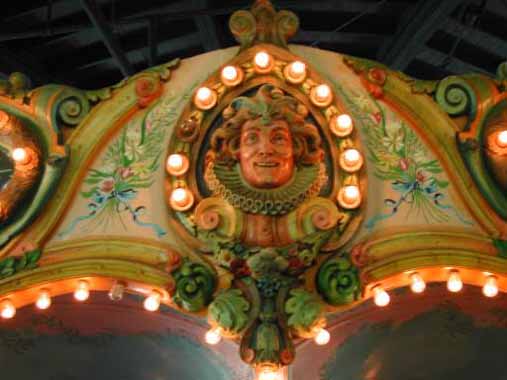 The Court Jester and The Fleur de Lis

The child, your emotional body, can get lost in this playground, if one does not understand that sooner or later the cycle, the ride, will stop, and you must get off. We link the carny experience with the Trickster. The carousel, the horse, revelation to the next level of consciousness, the white bird who flies with the soul as protector from the Trickster, the wooden rocking horse who goes nowhere just moves back and forth, the music, the music box, harmonics - creation by tones, the bell that signals the ride has begun and has ended... 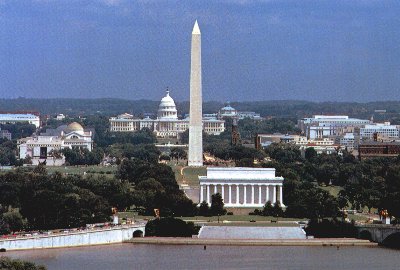 Synchronicity brought me to Washington as the United States was on the brink of war in the Middle East, the Cradle of Civilization, where east meets west at the place where the Tigris and Euphrates Rivers meet, and destiny is forever changed. This all began in the energies of a Full Moon in Virgo bringing things Full Circle in the Earth plane (playing field). This was also the time of the Vernal Equinox or Spring Solstice.

Security was tight in DC as in NYC where I live, police and security everywhere, anticipating a terrorist attack. The destruction of the Twin Towers on 9/11 still impacts on our society as we wait the outcome of the events in the Middle East. Most of the buildings I visited in DC, including the Hilton Hotel where I stayed, required photo ID. Metal detectors were not uncommon.

My meetings, the reasons that brought me to DC, went well, involving remote viewing, but cannot be discussed here.

Events unfolding in the Middle East are linked for me, to the blogs above and continuing events on this day.

I was guided to bring copies of my new book 2012 Sarah and Alexander which I signed and were now going home with people of different nations. Many people recognized me from Crystalinks. On Wednesday, a wonderful bookstore named Kramers, in the heart of DC, took several copies. Leaving copies of the books in Washington, DC somehow seemed to have relevance in ways that I did not as yet understand. But then again, our lives always have question marks as we move into new chapters. We place our energies into the universe, then wait and see what comes back as decided/destined by our souls.

Everyone in Washington was ready for war, some people supporting the President's decision while most did not. All were praying the war would be brief. Some people foresaw a third World War while those more optimistic saw the war lasting only a few weeks followed by a complete change in the Middle East in the years ahead, something called Peace. I saw this as a senseless war, yet one destined to happen, with American troops stationed in Iraq, perhaps until 2012.

Something amazing happened on my journey to DC. Destiny brought my Egyptian friend, Sherif into my life unexpectedly on Tuesday, just as it had brought us together on December 12, 2000 in Cairo. Sherif had come to Washington on business. We seemed to complete our 3D work at the same time, as our timelines intersected allowing us to spend personal time together. I could see Z having a hand in this. This was what I call a 'set-up'. I'm used to this sort of synchronistic event, but Sherif is not, and was amazed at the turn of events, though he knew there was guidance by Z.

Sherif had driven to DC for business, which having been completed allowed us time for an adventure. He asked me where I wanted to go. As I was about to answer, he looked into my eyes and said, "You need to go to the obelisk." That was exactly what I was 'seeing.'

The unusually mild weather made things surreal as we climbed up the grassy lawn to the Washington Monument. Tourists were leaving as the sun was setting. Suddenly I felt pulled back to the energies of 12:12 and the Great Pyramid and the day Sherif and I met.

A twist of fate had brought us both to this place at this time for different reasons, yet we knew the greater reason went beyond that which was physically shown to us.

There we stood, the Egyptian and the Jew, male and female, the energies of ancient ancestors spiraling around us. Sherif and I stood on opposite sides of the obelisk, guided to place our hands on it.

A wind began to spiral around us as if a whirlwind that sent the remaining tourists away. I saw it as a vortex encircling us and the obelisk. Sherif noted that it was only windy near the obelisk as we stood there.

At times like this nothing surprises me. Spiraling wind have always been part of my journeys. Often when I used to climb to the top of a high mountain, alone with Z, spiraling wind would appear out of nowhere.

Sherif 'saw' the Great Pyramid while I was shown the Sphinx and the obelisk in the park near my home in Brooklyn.

Signals, beacons of energies were all around us. I thought about my dream about Tesla and EM energies.

I saw a hatch being opened. It had a gray metal circular concave opening, about 6 inches in diameter, with one of those straight metal bars in the middle. You-turn the bar counterclockwise, then something that was Hermetically sealed, was released.

I also saw a link with other grid programs as if they were all lining up at specific vortexes, like connecting the dots of the fibonacci spirals or loops.

This was not about the usual shifting of grids people do to bring light and balance. This was a total realignment.

I connected with my experience in the Great Pyramid on December 12, 2000 - 12:12 and 9/11 when Sherif and I watched the Twin Towers implode. I was on my terrace in NY at the foot of the Verrazano Bridge, having passed on a trip to San Francisco with Sherif who now was in a hotel at the foot of the Golden Gate Bridge, as we talked on the phone.

The energies Sherif and I felt as we stood beside the obelisk, were somehow connected to 9/11 and 12:12 which takes us to the Mayan Calendar Prophecies and 2012.

A few minutes later we removed our hands from the obelisk, walked towards each other, and sat on the bench as the sun set before us.

A white pigeon flew by, drawing our attention to the sky. Thoughts of my dream about Tesla came to mind, which I shared with Sherif, a physicists and professor.

The clouds formed several patterns as we watched. We saw the numbers 33, Freemasons, The Masonic Program - Master Masons George Washington

We spoke of Masonic Symbology, ancient mystery school teachings and how they relate to this timeline. These teachings began in the Middle East, swept the planetary game board, to Europe, then to the United States and the birth of a nation, which was now going to war within these ancient energies.

Always there were secrets, my work in DC revolving around current ones having to do with the war.

I 'heard' the word Phoenix, resurrection from the ashes, female, rebirth. I told Sherif about my postings of late reflecting a rebirth, a new creation happening now. He could not disagree. That energy and the souls who have played the roles of warriors merged forth to us as if we stepped into another grid, or more to the point, between the grids in which we could experience the games of humanity.

Sherif and I sat there, hand in hand, as the energies rapidly increased. Suddenly we were assailed by the energies of soldiers lost in many wars through the history of the game, yet all happening at the same time. The voices were many, carrying with them the pain and suffering of the human experience. Never had I experienced such energy. As if in fast forward, I saw a review of human history which seemed to spiral around us as we watched, embellished by the whirling wind.

We watched the last glimpses of clouds which formed a pattern of a large pyramid. After a minute the sides of the pyramid curved inward slightly. There before us, the pattern now looked like the cables of a giant bridge. Whatever was happening was bridging the past, present and future.

A grid pattern appeared to the right of the bridge from our point of view.

A few minutes later, simultaneously we knew when it was time to leave. No words were needed. Hand in hand we ran down the hill toward the car parked some distance away.

We decided to have dinner along the water and drove to a local seafood restaurant.

After dinner we walked along the waterway which called to us since I saw the symbol of the bridge in the clouds. We felt something coming full circle as we walked under the full moon, and spoke about ancient Egypt, creation, the Temple on the Mount - prophecies, and bible stories that somehow link to what we were experiencing in our current reality.

In the magic of the moment we danced under the full moon, traveling into other times and places capturing their essence.

A twist of fate had brought us to this place for this experience, one whose purposes were interdimensionally entwined. We were the messengers, the carrier pigeons who were bringing the energies needed. One must always treasure these magic moments set up by our souls. They flow with the water, are watched by the heavens and created by us in magic and illusion.