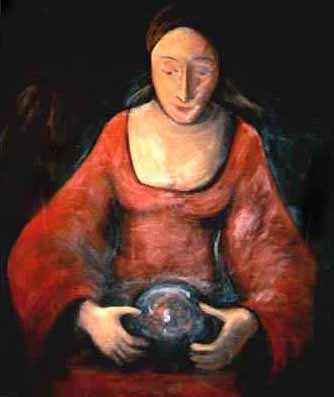 Scrying is a subjective way of defining abstract images. It is also known by various names such as "seeing" or "peeping", is the practice of looking into a suitable medium in the hope of detecting significant messages or visions. The objective might be personal guidance, prophecy, revelation, or inspiration, but down the ages, scrying in various forms also has been a prominent means of divination or fortune-telling. It remains popular in occult circles, discussed in many media, both modern and centuries old.

Pareidolia is a method of divination and takes on many forms. It is the tendency to interpret a vague stimulus as something known to the observer, such as seeing shapes in clouds, seeing faces in inanimate objects or abstract patterns, or hearing hidden messages in music.

Common examples are perceived images of animals, faces, or objects in cloud formations, the Man in the Moon, the Moon rabbit, hidden messages in recorded music played in reverse or at higher- or lower-than-normal speeds, and hearing indistinct voices in random noise such as that produced by air conditioners or fansInformation received varies with the type of scrying one is using to get answers. Information can be objective, message given that are independent of the scryer - or subjective, determined or influenced by the scryer. Scrying can also be viewed as a form of mediumship, messages allegedly coming from another realm. This all goes to the scrying tool used and the interpretation of the symbols. A dream dictionary is often helpful. As consciousness is evolving, so too are the meanings of the symbols.

Scrying can be an auto-deepening trance process that progresses in stages using tools such as a crystal ball, or other medium. Initially, the medium serves as a focus for the attention, removing unwanted thoughts from the mind in the same way as a mantra. Once this is achieved, the scryer begins a free association with the perceived images suggested, for instance in a crystal ball, by the tiny inclusions, web-like faults and/or the cloudy glow within the ball under low light (i.e. candlelight).

The technique of deliberately looking for and declaring these initial images aloud, however trivial or irrelevant they may seem to the conscious mind, is done with the intent of deepening the trance state, wherein the scryer hears their own disassociated voice affirming what is seen within the concentrated state in a kind of feedback loop. This process culminates in the achievement of a final and desired end stage in which visual images and dramatic stories seem to be projected within the mind's eye of the scryer, like an inner movie. This overall process reputedly allows the scryer to "see" relevant events or images within the chosen medium.

Scrying has been used for thousands of years by different cultures. Ancient Egypt used scrying in their Initiations. This included water scrying, dream scrying, oil scrying, and mirror scrying. One legend states that the goddess Hathor carried a shield that could reflect back all things in their true light. From this shield she allegedly fashioned the first magic mirror to "see."

Ancient Persia -- the Shahnama, a semi-historical epic work written in the late 10th century, gives a description of what was called the Cup of Jamshid, used in pre-Islamic Persia, which was used by wizards and practitioners of the esoteric sciences for observing all the seven layers of the universe.

Ancient Greeks and Celts practiced scrying using beryl, crystal, black glass, polished quartz, water, and other transparent or light catching bodies. Nostradamus is believed to have employed a small bowl of water as a scrying tool into which he gazed and received images of future events. Alchemists Edward Kelley and John Dee employed a form of scrying using a small crystal ball or shewstone - a piece of polished obsidion. The crystal ball and wax tablets used by Dee and Kelley are on display at the British Museum in London.

Scrying is the occult practice of using a medium, most commonly a reflective surface or translucent body, to aid perceived psychic abilities such as clairvoyance. The media often used to "see" are water, polished precious stones, crystal balls, or mirrors. Scrying, in this context, uses a "visual" process. There are some who believe the art of scrying is not limited to the use of "reflective" or "translucent" bodies only, but includes other media. Scrying has been used in many cultures as a means of seeing the past, present, or future; in this sense scrying constitutes a form of divination.