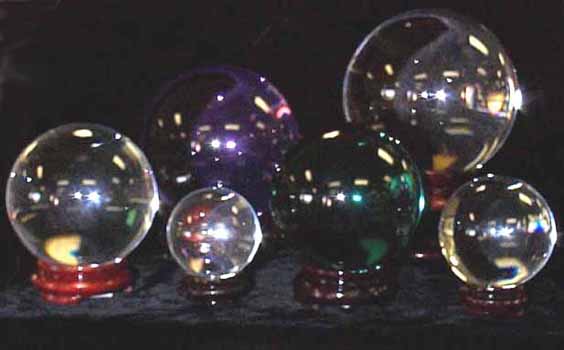 Crystal gazing is a form of divination or scrying achieved through gazing into a clear quartz crystal ball which can be purchased at a local store or online. It is also known as A HREF="crystallomancy.html">crystallomancy, gastromancy, and spheromancy.

As you gaze into the crystal your consciousness possibly will be able to see images evolve within the Crystal even though they're not actually there. They can be stationary or animated depending on the mind of the viewer. This has more to do with your consciousness than anything else.

Because crystal gazing has been developed by people of various cultures through a long period of time, the term crystal gazing denotes several different forms of a variety of objects, and there are several schools of thought as to the sources of the visions seen in the crystal gazing trance.

Crystal gazing may be used by practitioners - sometimes called "readers" or "seers" - for a variety of purposes, including to predict distant or future events, to give character analyses, to tell fortunes, or to help a client make choices about current situations and problems.

With respect to the tool or object used to induce the crystal-gazer's trance, this can be achieved with any shiny object, including a crystalline gem stone or a convex mirror - but in common practice, a crystal ball is most often used. The size of ball preferred varies greatly among those who practice crystallomancy.

Some gazers use a "palm ball" of a few inches in diameter that is held in the hand; others prefer a larger ball mounted on a stand. The stereotypical image of a gypsy woman wearing a headscarf and telling fortunes for her clients by means of a very large crystal ball is widely depicted in the media and can be found in hundreds of popular books, advertising pages, and films of the 19th, 20th, and 21st centuries. The pervasiveness of this image may have led to the increased use of fairly large crystal balls by those who can afford them.

Books of instruction in the art of crystal gazing often suggest that the ball used should be perfectly spherical (that is, without a flat bottom) and should be supported in a wooden or metal stand. If made of glass (e.g. lead crystal), it should be free from air bubbles but may be colored. If carved from natural crystalline stone (such as quartz, beryl, calcite, obsidian, or amethyst, it may display the natural coloring and structure of the mineral from which it was fashioned.

Some authors advise students to place a sigil, seal, or talismanic emblem beneath a clear sphere, but most do not. Most authors suggest that the work of crystal gazing should be undertaken in a dimly-lit and quiet room, so as to foster visions and more easily allow the onset of a trance state.

As for the origination of the trance visions themselves, some practitioners claim that crystal gazing engenders visionary experiences and preternatural and/or supernatural insight, while others think that the visions arise from the subconscious mind of the crystal gazer. Some authors accept both positions as not mutually incompatible.

Some stage magicians use a crystal ball as a prop and crystallomancy as a line of patter in the performance of mentalism effects. This type of presentation is sometimes referred to as a "C. G. act" - "C.G." standing for "crystal gazing." Perhaps the most famous expositor of the C. G. act during the 20th century was Alexander The Crystal Seer, billed as "The Man Who Knows." Another stage magician and mentalist who was also a crystal gazer was Julius Zancig, but he did not perform a C.G. act in public -- rather, he used the crystal ball in his work as a spiritual counsellor for private clients.


Crystal Balls can be used as oracles of divination by those who are clairvoyant. As with all crystals, crystal balls come in different sizes, shapes, types of crystal, and often have inclusions. The clearer, the better. The best crystals are polished clear quartz.

Psychics are generally attracted to a specific crystal ball based on the frequency, or grid matrix of the crystal which aligns with their personal grid. It is all intuitive. You can purchase a crystal ball online, but it is best to see and hold the crystal ball before buying it.

I use mild liquid soap and water then place the crystal in the sunlight and moonlight to energize. Other psychics have their own methods for cleaning and clearing crystals.

Place the crystal ball on a stand on a table that has a clear surface below it. Many people use a black cloth. Some prefer to place a light under the crystal, but it serves no real purpose.

Before beginning, relax your mind and focus your attention on the crystal ball. You are focusing an aspect of your consciousness on the crystal, while the third eye opens and allows you to 'see' images within.

Gaze into the crystal ball .... wait for images to appear. Images may be stationary or move as if viewing an animation within a hologram.

As with all forms of scrying, images appear as archetypes, whose interpretation is subjective.

The larger the image appears in the crystal ball, the closer the timeline for it to manifest and the more significant the information.

Two people gazing into a crystal ball at the same time, may see different images.

If you cannot 'see' anything in the crystal ball at first, be patient and keep trying.

At the very least a crystal ball will bring energy to the room in which it is placed.

Record what you see on your phone or other device for future reference.