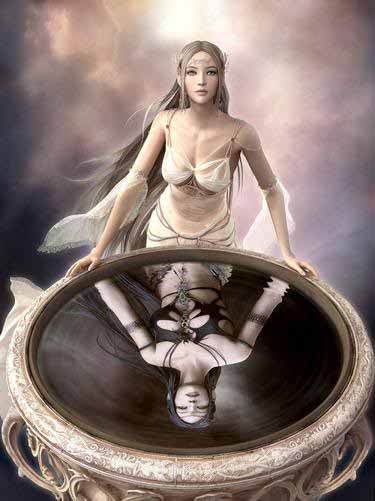 Mirror scrying is an evolved form of water scrying. When it became possible to build mirrors they were regarded as being like water that was fixed into one place.

The early mirrors were made of polished copper, brass, marcasite, tin foil or mercury behind glass, polished silver and obsidian. All types of mirrors may be used for scrying and the size is not important.

Because mirrors are linked to the moon mirrors should be backed with silver. Try and use a round or oval mirror instead of a square mirror.

For the frame try and use a mirror that has a silver frame. Old mirrors also seem to work better than new mirrors.

Most seers prefer to use a black mirror. Because this is difficult to buy you may have to make one.

Just simply take out the glass and paint it black. You may have to give it a few coats of paint though. When you put it back in the frame make sure the glass part is to the front.

The use of black mirrors may be traced back over the centuries. Alchemists Edward Kelley and John Dee used a black mirror of shewstone - a piece of polished obsidian.

Catoxtromancy is a form of divination by means of looking glasses. In ancient Rome, special diviners known as "blindfolded boys" were known to gaze into mirrors in order to experience visions of the future or of the unknown, and according to the 4th century 'Scriptores Historiae Augustae' the death of Julian the Apostate was accurately predicted by diviners using this method.

When using the black mirror for scrying you do not want to see your reflection. The best is to leave the mirror on a table and look at it from an angle.

Look into the depths of the mirror as though you were looking into a bowl of water. At first it may appear gray than colors will come and go.

With time and practice you will be able to see sacred images like still photographs or moving film images. Spirits may sometimes look at the scryer, talk to the scryer or even touch the scryer. The visions may even exist outside the mirror and surround the scryer on all sides.


Other Methods of Mirror Scrying 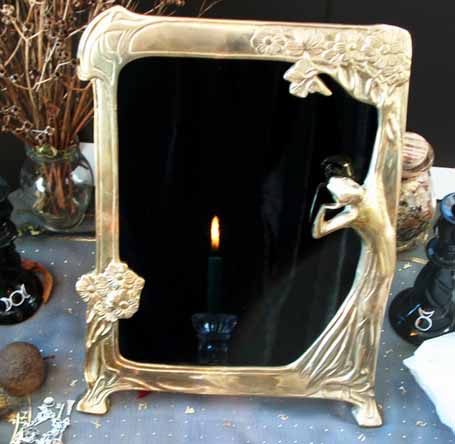 This type of Mirror Scrying involves messages received on a mirror ...

Remember, when it comes to reality, it's all done with mirrors... 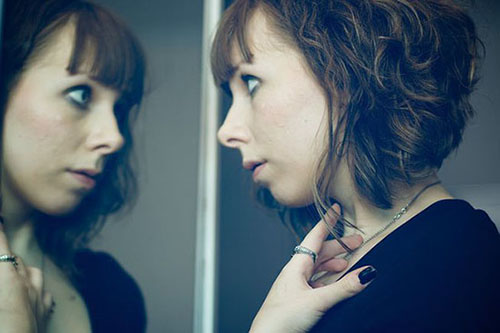 Why do we see monsters in the mirror?   MNN - August 16, 2017
Herešs a fun exercise, though you might not want to do it alone. Stare into a mirror for several minutes and you may notice your face begin to distort. It could even morph into something downright scary. 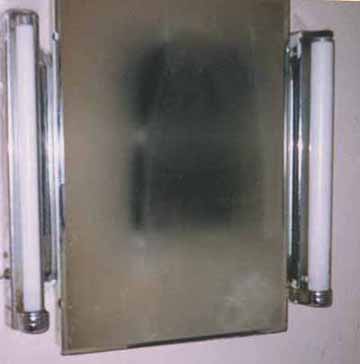