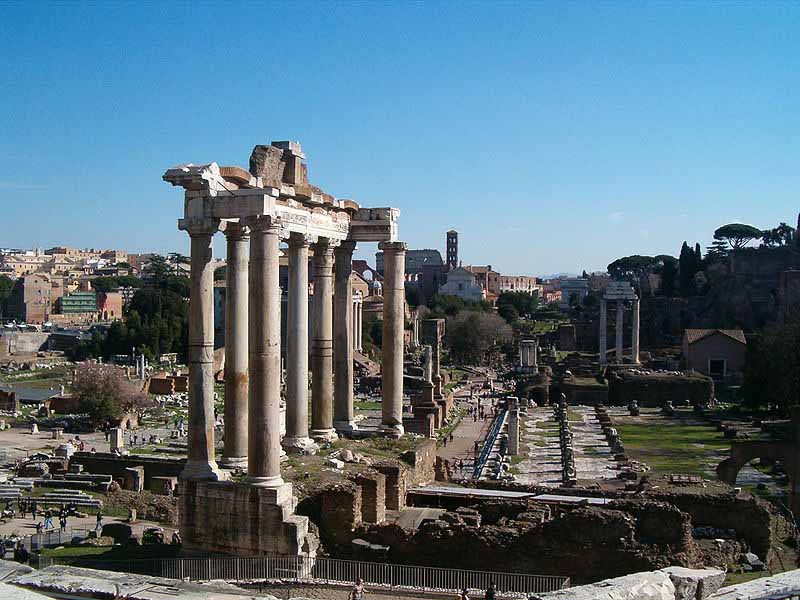 In ancient Roman religion and myth, Saturn (Latin: Saturnus) was a god of agriculture, liberation, and time. His reign was depicted as a Golden Age of abundance and peace. He was thus a god of wealth, and the Temple of Saturn in the Roman Forum housed the state treasury. In December, he was celebrated at what is perhaps the most famous of the Roman festivals, the Saturnalia, a time of feasting, role reversals, free speech, gift-giving and revelry. Saturn the planet and Saturday are both named after the god.

The Romans identified Saturn with the Greek Cronus, whose myths were adapted for Latin literature and Roman art. In particular, Cronus' role in the genealogy of the Greek gods was transferred to Saturn. As early as Livius Andronicus (3rd century BC), Jupiter was called the son of Saturn.

The Roman Saturn, however, had two consorts who represented different aspects of the god. The name of his wife Ops, the Roman equivalent of Greek Rhea, means "wealth, abundance, resources." Earlier was his association with Lua ("destruction, dissolution, loosening"), a goddess who received the bloodied weapons of enemies destroyed in war.

Under Saturn's rule, humans enjoyed the spontaneous bounty of the earth without labor in a state of social egalitarianism. The revelries of Saturnalia were supposed to reflect the conditions of the lost mythical age, not all of them desirable except as a temporary release from civilized constraint. The Greek equivalent was the Kronia.

According to Varro, Saturn's name derived ab satu, from the word for "sowing." Another of his epithets that referred to his agricultural functions was Sterculius, from stercus, "manure." Agriculture was central to Roman identity, and Saturn was a part of archaic Roman religion. His name appears in the ancient hymn of the Salian priests, and his temple was the oldest known to have been recorded by the pontiffs. It was located at the base of the Capitoline Hill, and a row of columns from the last rebuilding of the temple still stand.

The position of Saturn's festival in the Roman calendar led to his association with concepts of time, especially the temporal transition of the New Year. Macrobius (5th century AD) presents an interpretation of the Saturnalia as a festival of light leading to the winter solstice.


In the Greek tradition, Cronus was often conflated with Chronus, "Time," and his devouring of his children taken as an allegory for the passing of generations. The sickle or scythe of Father Time is a remnant of the agricultural implement of Cronus-Saturn, and his aged appearance represents the waning of the old year with the birth of the new, in antiquity sometimes embodied by Aion. In late antiquity, Saturn is syncretized with a number of deities, and begins to be depicted as winged, as is Kairos, "Timing, Right Time".

The cult of Ops was instituted by King Titus Tatius, the Sabine monarch. Later Ops became the patroness of riches, abundance, and prosperity both personal and national.

Originally on August 10, a festival took place in her honor. On December 9, the Opalia was celebrated. On August 25, the Opiconsivia was held. The Latin word ops means "riches, goods, abundance, gifts, munificence, plenty". This word is also related to opus, meaning "work" and, particularly "working the earth, ploughing, sowing". This activity was of old deemed sacred, and was often attended by religious rituals intended to obtain the good will of the chthonian deities such as Ops and Consus, etc.

Ops had a famous temple in the Capitolium. In her statues and coins, Ops is figured sitting down, as chthonian deities normally are, and generally holds a scepter or a corn spike as her main attributes.

In memory of the Golden Age of Rome, each year the Saturnalia was observed on December 17 at his temple on the Forum Romanum. This temple, below the Capitoline Hill, contained the Royal Treasury and is one of the oldest in Rome. The Saturnalia was one of the major events of the year. Originally only one day, it was later extended to seven days. During this festival, business was suspended, the roles of master and slaves were reversed, moral restrictions were loosened and gifts were exchanged. Offerings made in his honor were done with uncovered heads, contrary to the Roman tradition. In contrast to his festival, Saturn himself was never very popular.

Sacrifices to Saturn were performed according to "Greek rite" (ritus graecus), with the head uncovered, in contrast to those of other major Roman deities, which were performed capite velato, "with the head covered." Saturn himself, however, was represented as veiled, as for example in a wall painting from Pompeii that shows him holding a sickle and covered with a white veil.

Pliny notes that the cult statue of Saturn was filled with oil; the exact meaning of this is unclear. Its feet were bound with wool, which was removed only during the Saturnalia. It wore a red cloak, and was brought out of the temple to take part in ritual processions and lectisternia, banquets at which images of the gods were arranged as guests on couches.

Little evidence exists for the cult of Saturn outside Rome, but his name resembles that of the Etruscan god Satres. The potential cruelty of Saturn was enhanced by his identification with Cronus, known for devouring his own children. He was thus equated with the Carthaginian god Ba'al Hammon, to whom children were supposedly sacrificed. Saturn was also among the gods the Romans attempted to equate with Yahweh, whose Sabbath (on Saturday) he shared as his holy day. The phrase Saturni dies, "Saturn's day," first appears in Latin literature in a poem by Tibullus, who wrote during the reign of Augustus.

In 104 BC, the plebeian tribune Lucius Appuleius Saturninus issued a denarius depicting Saturn driving a four-horse chariot (quadriga), a vehicle associated with rulers, triumphing generals, and sun gods. Saturninus was a popularist politician who had proposed free grain distribution to the poor of Rome. The head of the goddess Roma appears on the obverse. The Saturnian imagery played on the tribune's name and his intent to subvert the social hierarchy by basing his political support on the common people (plebs) rather than the senatorial elite.