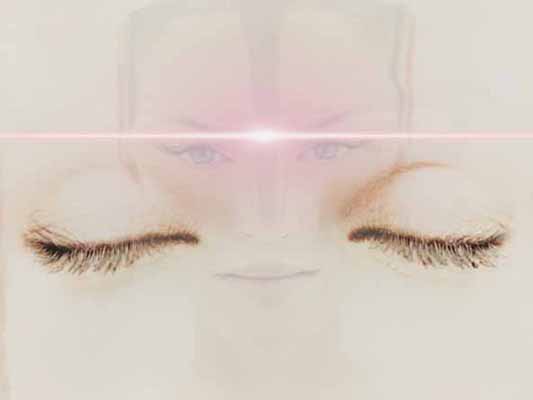 The term clairvoyance (from French "clair" meaning "clear" and "voyance" meaning "vision") refers to the ability to gain visual telepathic information about an object, person, location or physical event through means other than the known human senses. It is often called ESP or extrasensory perception. For some clairvoyance is innate, while for most people it can be developed through various psychic development exercises, meditation, and yoga. Clairvoyance Lessons

To understand how all psychic abilities work, is to understand the nature of reality as a consciousness hologram, in which we vicarious experience. The human brain is an electrochemical machine (computer) forever viewing streaming consciousness for experience and interpretation. It is programmed by binary code with patterns of experience based on one's DNA codes. To become more clairvoyant is to focus your mind to see into the endless consciousness grids that comprise the realities in which you experience simultaneously.


Clairvoyance today falls under the heading of pseudoscience or Paranormal Psychology. There have been anecdotal reports of clairvoyance and 'clear' abilities throughout history in most cultures. Often clairvoyance has been associated with religious or shamanic figures, offices and practices. For example, ancient Hindu religious texts list clairvoyance amongst other forms of 'clear' experiencing, as siddhis, or 'perfections', skills that are yielded through appropriate meditation and personal discipline.

A large number of accounts of clairvoyance are of the spontaneous variety among the general populace. For example, many people report seeing a loved one who has recently died before they have learned by other means that their loved one is deceased. While anecdotal accounts do not provide scientific proof of clairvoyance, such common experiences continue to motivate research into such phenomena.

The earliest record of somnambulistic clairvoyance is credited to the Marquis de Puysegur, a follower of Franz Mesmer, who in 1784 was treating a local dull-witted peasant named Victor Race. During treatment, Race reportedly would go into trance and undergo a personality change, becoming fluent and articulate, and giving diagnosis and prescription for his own disease as well as those of others. When he came out of the trance state he would be unaware of anything he had said or done.

This behavior is somewhat reminiscent of the reported behaviors of the 20th century medical clairvoyant and psychic Edgar Cayce. It is reported that although Puysegur used the term 'clairvoyance', he did not think of these phenomena as "paranormal", since he accepted mesmerism as one of the natural sciences.

Clairvoyance was a reported ability of some mediums during the spiritualist period of the late 19th and early 20th centuries, and psychics of many descriptions have claimed clairvoyant ability up to the present day.

Early researchers of clairvoyance included William Gregory (chemist), Gustav Pagenstecher, and Rudolf Tischner. These were largely qualitative experiments in which selected participants sought to identify a concealed target image, or to provide accurate information about the history of a target object.

Charles Richet, the noted physiologist and, later, Ina Jephson, a member of the Society for Psychical Research, introduced more quantitative methods. A significant development in clairvoyance research came when J. B. Rhine, a psychologist at Duke University, introduced a standard methodology, with a standard statistical approach to analyzing the data, as part of his research into extrasensory perception.

Perhaps the best-known study of clairvoyance in recent times has been the US government-funded remote viewing project at SRI/SAIC during the 1970s through the mid-1990s; at least those studies amongst these that did not involve "agents" visiting or being otherwise aware of the target sites.

Some parapsychologists have proposed that our different functional labels (clairvoyance, telepathy, precognition, etc.) all refer to one basic underlying mechanism, although there is not yet any satisfactory theory for what that mechanism may be. Numerous spiritual philosophies contain the notion of an inner third eye that is related to the ajna chakra and also the pineal gland, and to which is attributed significance in mystical awakening or enlightenment, clairvoyant perception, and higher states of consciousness. This idea occurs historically in ancient, central, and east Asia; and also in contemporary occult theories relating to yoga, Theosophy, Pagan religions, and New Age spiritual philosophies. The secretory activity of the pineal gland is only partially understood. Its location deep in the brain suggested to philosophers throughout history that it possesses particular importance. This combination led to its being regarded as a "mystery" gland with mystical, metaphysical, and occult theories surrounding its perceived functions.