In the energies of a New Moon Solar Eclipse celebrities came out to honor the best films and performances of 2016. Once again I enjoyed the fashions (lots of gold) and accessories, the entertainment, and pretty much everything else that went into Hollywood's number one night. Jimmy Kimmel did a great job as host this year giving the guests small bags of candy parachuted from the ceiling and incorporating tourists into the show. The tall life size Oscar statues, made of crystals that adorned the stage, were spectacular.

Then ... capping off the Oscars ...like a surprise ending in a film ... the biggest blunder in Oscar history happened ... reminding me of Steve Harvey when he initially announced the wrong winner in the 2015 Miss Universe contest. The error occurred because the man from Price Waterhouse, who was holding the envelope, gave Warren Beatty the wrong one while preoccupied taking a picture of Emma Stone.


Figuring Out We Live in a Hologram 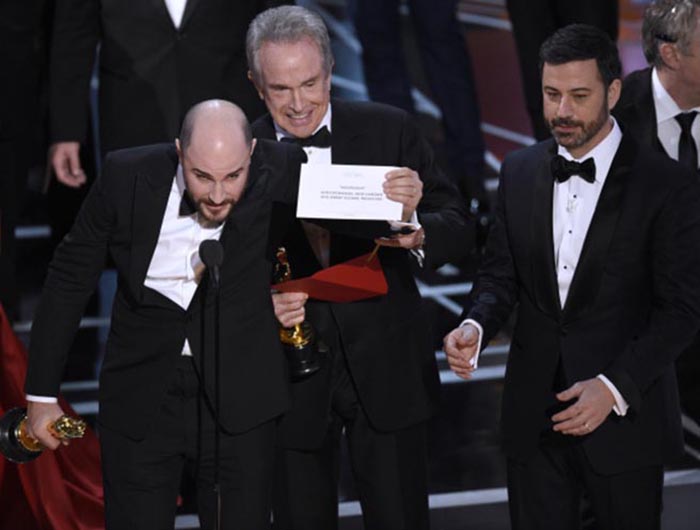 
Last night's Oscar bizarreness was not bizarre in a way that is typical of this entirely bizarre time. The rhythm of the yes-they-won-oh-my-God-no-they-didn't event, with La La Land replaced by Moonlight as Best Picture, was weirdly like that of ... Election Night. First, a more or less expected, if safe, result was on its way - though Hillary Clinton never got all the way to the stage, so to speak, the result did seem safely in hand at 7 p.m., according to the polling - and the expected and safe people were ready to deliver their touching but obviously polished pieces. Then the sudden confusion and visible near-panic of people running around in the background of the stage, with the same slightly horrified spirit that one felt on Election Night as shocking results began emerging from the exurban counties in Florida. Then, yes - can this be happening? - the revised and unexpected result.

In this case, obviously, the result was positive to all but the poor La La Land producers, with their earnest and spouse-approved speeches already delivered. Moonlight was no Donald Trump of cinema, and obviously a popular favorite. (Though there are those of us who found its beautifully photographed sentiments a bit, well, sentimental.) But the rhythm of the night was disconcertingly the same, and the sheer improbability of the happenstance scarily alike. Nothing like this has remotely happened before.

Equating this with the shocking results that emerged from Florida as Donald Trump became president. This wasn't just a minor kerfuffle. This was a major malfunction. Trump cannot be President - forgetting all the bounds of ideology, no one vaguely like him has ever existed in the long list of Presidents, good, bad, and indifferent, no one remotely as oafish or as crude or as obviously unfit. People don't say "Grab 'em by the pussy" and get elected President. Can't happen. In the same way, while there have been Oscar controversies before - tie votes and rejected trophies - never before has there been an occasion when the entirely wrong movie was given the award, the speeches delivered, and then another movie put in its place. That doesn't happen. Ever.

And so both of these bizarre events put one in mind of a simple but arresting thesis: that we are living in the Matrix, and something has gone wrong with the controllers. This idea was, I'm told, put forward first and most forcibly by the N.Y.U. philosopher David Chalmers: What is happening lately, he says, is support for the hypothesis that we are living in a computer simulation and that something has recently gone haywire within it. The people or machines or aliens who are supposed to be running our lives are having some kind of breakdown. There's a glitch, and we are in it.

Once this insight is offered, it must be said, everything else begins to fall in order. The recent Super Bowl, for instance. The result, bizarre on the surface - with that unprecedented and impossible comeback complete with razzle-dazzle catches and completely blown coverages and defensive breakdowns - makes no sense at all in the 'real world'. Doesn't happen. But it is exactly what you expect to happen when a teen-ager and his middle-aged father exchange controllers in the EA Sports video-game version: the father stabs and pushes the buttons desperately while the kid makes one play after another, and twenty-five-point leads are erased in minutes, and in just that way - with ridiculous ease on the one side and chicken-with-its-head-cut-off panic infecting the other. What happened, then, one realizes with last-five-minutes-of "The Twilight Zone" logic, is obvious: sometime in the third quarter, the omniscient alien or supercomputer that was "playing" the Patriots exchanged his controller with his teen-age offspring, or newer model, with the unbelievable result we saw.

There may be not merely a glitch in the Matrix. There may be a Loki, a prankster, suddenly running it. After all, the same kind of thing seemed to happen on Election Day: the program was all set, and then some mischievous overlord - whether alien or artificial intelligence doesn't matter - said, "Well, what if he did win? How would they react?" "You can't do that to them," the wiser, older Architect said. "Oh, c'mon," the kid said. "It'll be funny. Let's see what they do!" And then it happened. We seem to be living within a kind of adolescent rebellion on the part of the controllers of the video game we're trapped in, who are doing this for their strange idea of fun.

The thesis that we are in a simulation is, as people who track such things know - my own college-age son has explained it to me - far from a joke, or a mere conceit. The argument, actually debated at length at the American Museum of Natural History just last year, is that the odds are overwhelming that ours is a simulated universe. The argument is elegant. Since the advance of intelligence seems like the one constant among living things - and since living things are far likelier than not to be spread around the universe - then one of the things that smart living things will do is make simulations of other universes in which to run experiments. (We're not all that smart, and we're already starting to do it, modeling large interacting economies and populations on our own, presumably "primitive" computers.)

Since there will be only one "real" universe, and countless simulated ones, the odds that we are living in one of the simulations instead of the one actual reality are overwhelming. If intelligent life exists, then we are surely likely to be living in one of its Matrices. (Or Matrixes, depending on how you gramatise it.)

As Clara Moskowitz, writing in Scientific American, no less, explains succinctly, "A popular argument for the simulation hypothesis came from University of Oxford philosopher Nick Bostrum in 2003, when he suggested that members of an advanced civilization with enormous computing power might decide to run simulations of their ancestors. They would probably have the ability to run many, many such simulations, to the point where the vast majority of minds would actually be artificial ones within such simulations, rather than the original ancestral minds. So simple statistics suggest it is much more likely that we are among the simulated minds."

Terrible things did happen as the cold-blooded, unemotional machines that ran it experimented with the effects of traumatic events - wars, plagues, "Gilligan's Island" - on hyper-emotionalized programs such as us. And yet the basic logic of the enfolding program seemed sound. Things pinned down did not suddenly drift toward the ceiling; cats did not go to Westminster; Donald Trump did not get elected President; the movie that won Best Picture was the movie that won Best Picture. Now everything has gone haywire, and anything can happen.

Whether we are at the mercy of an omniscient adolescent prankster or suddenly the subjects of a more harrowing experiment than any we have been subject to before (is our alien overlords' funding threatened, thus forcing them to "show results" to the grant-giving institution that doubtless oversees all the simulations?), we can now expect nothing remotely normal to take place for a long time to come. They're fiddling with our knobs, and nobody knows the end.

Or perhaps, let us pray, it's just that someone forgot to plug in an important part of the machine, and, when they spot the problem, they'll plug us back in to the usual psychological circuits. Let's hope for a sudden mysterious surge of energy, and then normalcy again. But don't count on it. Expect the worst. Oh, wait. It's already happened.