Ellie at the Tribeca Film Festival 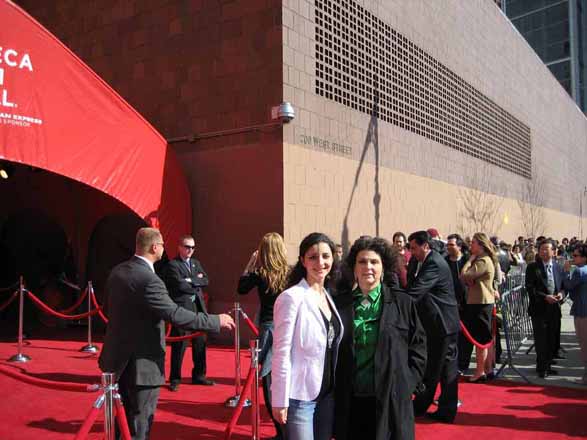 The energy of the Tribeca Film Festival had a spiritual pulse reflected in 2007 with healing the issues of humanity and the planet.

The day started off overcast, the sun suddenly coming out as I headed to the west side of Manhattan to meet Linda and do interviews for her cable TV show Cultural Hours. 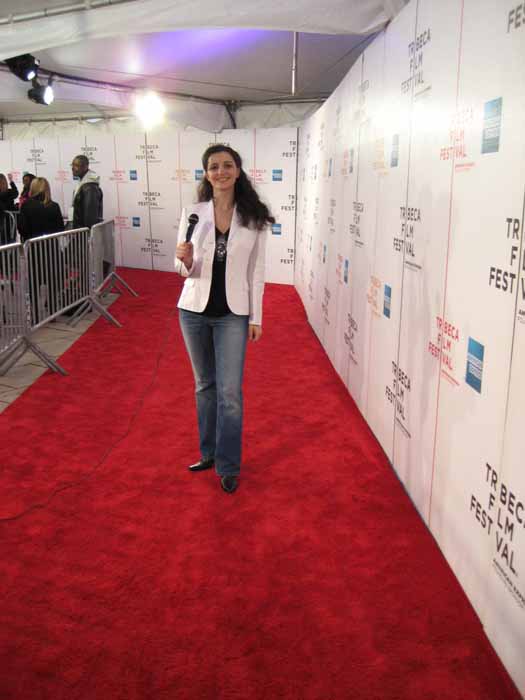 Arriving in a limo, a man walked over to the curb and opened the door for me, just at the end of the red carpet. He had his press photographer video me as I got out, perhaps thinking I was a star, as those waiting on line to see the film, looked on. For a nano second I knew how it felt to be a star, and giggled inside. Yes, I could handle this and my Leo Moon agreed. He introduced himself as New York actor Al Burgo and chatted with us for a few minutes, taking photos, videos, and exchanging business cards before entering the building. It turns out he grew up 2 blocks from where I did as a child. I lived on West 22 Street; Al lived on West 24th. We both went to Lincoln High School, though I am a few years older.

Walking down the red carpet, we were taken to our place to await the arrival of those in the film The Air I Breathe. We talked to people from media all over the world, including CNN. The man standing next to us, Al from Brazil, is here on assignment. His job takes him to media events which he records, then sends home for broadcast. Not a bad job.

The stars of the film walked down the aisle about 45 minutes behind schedule, so they had little time to stop and talk. Linda and I, and the other reporters, did the best we could getting interviews. Our favorite interview was with one of the film's writers, Bob DeRosa, as we talked about the synchronicities he experienced creating the script. (Click the video link above). Bob was truly inspiring and definitely spiritual. This is his time.

Synchronicity always goes to time and timing. Note how Stuart's revelations come at the time of my workshop and movement of my screenplay. The Secret is that it is all created outside the box and played out here. 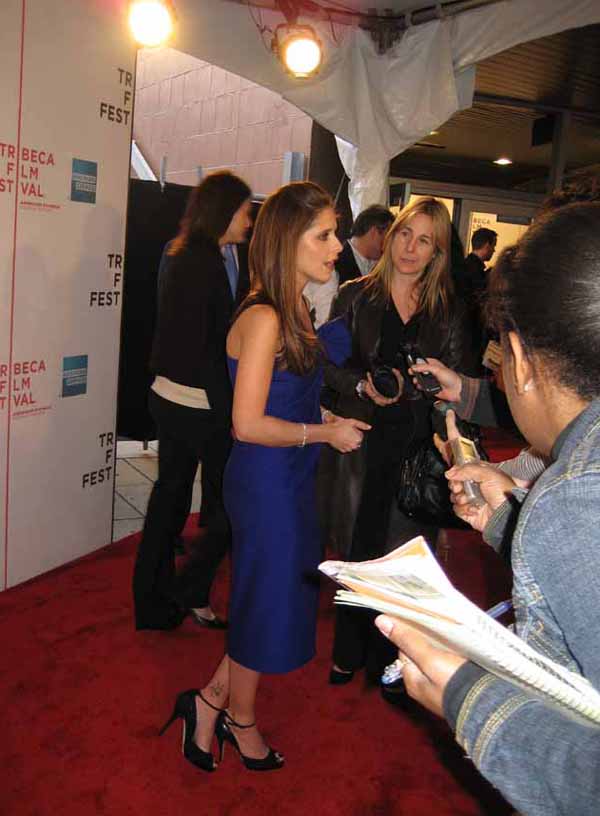 Sarah Michelle Gellar is much prettier than her photos and was charming and gracious. 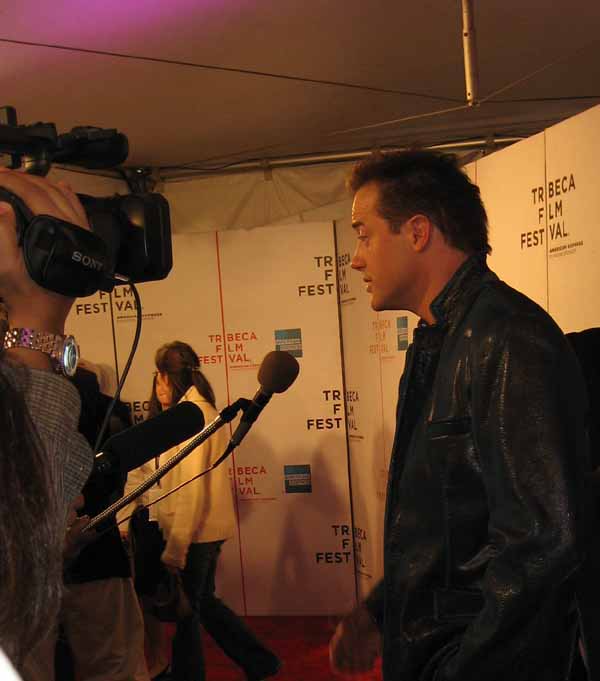 There was a quick chat with Brendan Frasier who spoke about his role in the film.

There was no time to get photos with the stars, as I was helping Linda by working her camera or holding the microphone.

The Air I Breathe Premieres Without Whitaker
Huffington Post - April 30, 2007

When it was time to enter the theater, Linda and I looked at each other, as if we knew intuitively that we did not want to watch a movie, especially a drama. And so we hopped in a taxi and ran around town, press badges dangling from our necks, to greet other stars on the red carpet of their films at the Tribeca Film Festival.

Somewhere in downtown Manhattan ... we wound up on the red carpet for Ricki Lake, her film being a documentary about giving birth at home, midwifery -- The Business of Being Born. Love the film and and its title as it speaks of the feminine and rebirth. This film is not for everyone.

Got to talk with Camryn Manheim who plays Delia Banks in the TV series Ghost Whisperer - having a brief chat about mediumship, John Edward and James Van Praagh.

Back across town, some time later, we ate dinner at a seafood restaurant. Linda casually mentioned that the people I post about at the time of Ezine, generally do not include women. Not that she is an activist, but why all the men? That's easy ... how often in history have women been allowed to make a difference. The same holds true of other minorities.


Linda told me about her 88 year old grandmother, Lillian, who lives in St. Petersburg, Florida. Through her life she suffered the usual trails and tribulations one must endure when living with an alcoholic husband. She raised a son, and has had heart surgery on more than one occasion, among other illnesses. Women of her generation usually did not divorce. Where would they go? They endure much and it affects them, generally in the chest or breast area, (heart chakra) yet Linda said she always maintained a quality of feeling special that one could sense while in her presence.

In 2006 Lillian's husband died. It was like a rebirth in that she was alone and free, having adequate income, a home, and wanting to do something special with her life. There is nothing like being free of a codependent relationships that doesn't work.

For many years Lillian had taught ballroom dancing, but that was long ago. One must have a passion in life or they begin to detach from the grid, slowly dying, then cross over. Looking for something to do, she went to the local dance studio. There she met a gay male dance teacher, Roy. Something clicked between them. You either have chemistry with someone (your grids align) or you don't. They began to dance together. Her medical problems went away. She is fine. Lillian and Roy have gone on to win 13 contests. This would make a great film.

Act III: At the end of the day, I had a marvelous time, though chasing down interviews with celebrities is not my cup of tea as a steady diet. As my limo driver, a caucasian man my age, and I drove along the Belt Parkway adjacent to the Atlantic Ocean, the stars and lights from the bridge streaming onto the water, he made an interesting observation. Due to the heavy rain recently, the water had reached an all time high, flooding in several places. We talked about climate changes to which he seemed very knowledgeable on the subject. Most interesting to him was last Friday night's major rain storm. He works a night shift and drives along the parkway all the time, always drawn to the beauty of the water as it meets the night sky. But last Friday night was different he reported. The last storm had ended. He had never seen the water so calm and close to the esplanade. He described it as a sheet of glass, with hardly any ripples which he thought was almost surreal.

Alas isn't all of reality a surreal film strip, or virtual reality experience, in which we play our roles within and view them through the camera's eye or the lens of time. (wink)

All the world's a stage,
And all the men and women merely players.
They have their exits and their entrances,
And one man in his time plays many parts,
His acts being seven ages.

I feel that everything is set in motion and that which I came her to do, will show itself soon. It's about time and timing and letting life unfold. Life doesn't get better than that!