Two Tornadoes and a Macroburst Hit My Area of Brooklyn 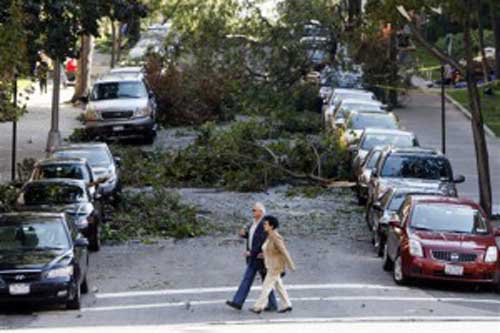 It was here and gone in the blink of an eye ... a storm laced with metaphoric content that happened 24 hours before sunset on Friday - marking the beginning of the High Holy Day Yom Kippur. Though not religious, I have always considered this to be the most powerful holiday of the year.

Earlier in the day I had wondered ... "Why are people programmed to celebrate holidays linked to events in history that may or may not have happened thousands of years ago? How does worshipping any god, in any religion, change anything destined to happen in time?"


The sky suddenly became darkened by storm clouds, though not the same as my June 2009 fade to black experience when it was totally black.

Lights flickered in my apartment.

The wind blew in a conical (funnel) fashion.

The rain came in sheets.

Emergency vehicles raced through the streets, their sirens heard everywhere.

The news reported power outages, though not here in Bay Ridge Broolyn.

One strange vertical electrifying bolt of lightning caught my eye. It was videoed and later reported on the news that it struck close to the State of Liberty.

Passengers were stranded in and around the city.

There was damage everywhere.

Mother nature seemed to have released all its furry, symbolically attacking and destroying trees.

A man seated in his car witnessed the trees in front of him fall within seconds, in a strange zig-zag pattern as if some sort of symbolic message.

Another man told NBC news, "It got really dark. The wind came down like it was a spaceship landing on the block."

The National Weather Service concluded that the city was hit by two tornadoes and a macroburst which tore a path of destruction through a 14-mile path of Brooklyn to Queens.. The tornadoes were actually less destructive than the sudden onset of intense winds called a macroburst which was about 1-1/2 miles wide at the point of impact, had wind gusts of up to 125 mph, a 5-mile cone of damage, and traveled about 8 miles.