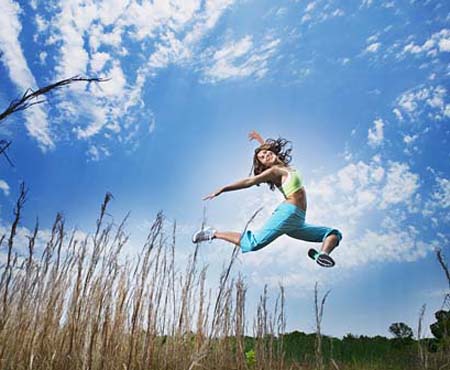 In the host of human emotions, we find self-esteem somewhere near the top in importance. Life is about having issues and overcoming them. It is the cycle of existence here.

How do you see yourself? Do you have high or low self-esteem at the moment? Can you remedy the situation now?

Life, and those we deal with, especially people with issues, has a way of making us question who we are and how the world sees and reacts to us. This is part psychology and part metaphysics. It is shaped by many factors in the physical world, and by the DNA codes that guide ever major event that happens while we experience at this level of conscious awareness.

If you look good ... you feel good and you attract positive lessons to your life rather than drama. The trick is how to maintain this positive frequency without reverting back to old codes of behaving that take away the high self-esteem you create.

High self-esteem goes to empowering oneself and being independent, which is the goal of all self-awareness programs. Helping people build self-esteem is a multi-million dollar industry along with self-help, self-awareness and healing issues. People write books, create DVDs, give workshops and seminars, among other ways to help develop higher self-esteem.

From the film and book The Secret - or the Synchronicity Principle you attract what you experience based on your self-esteem.

The importance of self-esteem various in the different chapters of our lives ... but it always there guiding how we feel about ourselves and the way we believe others see us.

Synonyms or near-synonyms of self-esteem include:

self-love (which can express overtones of self-promotion),

Self-esteem is distinct from self-confidence and self-efficacy, which involve beliefs about ability and future performance.

For the purposes of empirical research, psychologists typically assess self-esteem by a self-report inventory yielding a quantitative result. They establish the validity and reliability of the questionnaire prior to its use. Researchers are becoming more interested in measures of implicit self-esteem.

Modern theories of self-esteem explore the reasons humans are motivated to maintain a high regard for themselves. Sociometer theory maintains that self-esteem evolved to check one's level of status and acceptance in ones' social group. According to terror management theory, self-esteem serves a protective function and reduces anxiety about life and death.

Whereas popular lore recognizes just "high" self-esteem and "low" self-esteem, the Rosenberg Self-Esteem Scale (1965) and the Coopersmith Self-Esteem Inventory (1967/1981) both quantify it in more detail, and feature among the most widely used systems for measuring self-esteem. The Rosenberg test usually uses a ten-question battery scored on a four-point response system that requires participants to indicate their level of agreement with a series of statements about themselves. The Coopersmith Inventory uses a 50-question battery over a variety of topics and asks subjects whether they rate someone as similar or dissimilar to themselves. Self-esteem


Young people may crave boosts to their self-esteem a little too much, new research suggests. Researchers found that college students valued boosts to their self-esteem more than any other pleasant activity they were asked about, including sex, favorite foods, drinking alcohol, seeing a best friend or receiving a paycheck. "It is somewhat surprising how this desire to feel worthy and valuable trumps almost any other pleasant activity you can imagine," said Brad Bushman, lead author of the research and professor of communication and psychology at The Ohio State University.

Bushman conducted the research with Scott Moeller of Brookhaven National Laboratory and Jennifer Crocker, professor of psychology at Ohio State. The study appears online in the Journal of Personality and will be published in a future print edition.

In two separate studies, the researchers asked college students how much they wanted and liked various pleasant activities, such as their favorite food or seeing a best friend. They were asked to rate how much they wanted and liked each activity on a scale of 1 (not at all) to 5 (extremely). One of the items they were asked about was self-esteem building experiences, such as receiving a good grade or receiving a compliment.

"We found that self-esteem trumped all other rewards in the minds of these college students," Bushman said. Those students who indicated they highly valued self-esteem also showed it in the laboratory.

In one study, the participants took a test which purportedly measured their intellectual ability. Afterwards, the students were told if they waited another ten minutes, they could have their test re-scored using a new scoring algorithm that usually yields higher test results. Students who highly valued self-esteem were more likely to stay to get the new scores. "They were willing to spend their own precious time just to get a small boost in their self-esteem," Bushman said.

Bushman said there is nothing wrong with a healthy sense of self-esteem. But the results of this study suggest many young people may be a little too focused on pumping up their self-esteem.

Here's why: for all the pleasant activities examined in this study, participants were asked to rate both how much they liked the activity and how much they wanted it. Both questions were asked because addiction research suggests that addicts tend to report they "want" the object of their addiction (drugs, alcohol, gambling) more than they actually "like" it, Bushman said. "The liking-wanting distinction has occupied an important place in addiction research for nearly two decades," Moeller said. "But we believe it has great potential to inform other areas of psychology as well."

Findings showed that people with a strong sense of entitlement were the ones who were most likely to "want" the good things in life Đ including boosts to their self-esteem Đ even more than they actually "like" them.

Entitlement was measured as part of a narcissism scale which participants completed. In the scale, participants had to choose which of two statements they most agreed with. For example, people who scored high on entitlement were more likely to agree with "If I ruled the world, it would be a much better place" rather than "The thought of ruling the world frightens the hell out of me. Entitled people want all the good things in life, even if they don't particularly like them. Of course, there's no problem with enjoying good things, but it is not healthy to want them more than you like them."

Bushman said he sees danger in this obsession with self-esteem. Research has shown that levels of self-esteem have been increasing, at least among college students in the United States, since the mid-1960s. "American society seems to believe that self-esteem is the cure all for every social ill, from bad grades to teen pregnancies to violence. But there has been no evidence that boosting self-esteem actually helps with these problems. We may be too focused on increasing self-esteem."

Study co-author Crocker added, "The problem isn't with having high self-esteem; it's how much people are driven to boost their self-esteem. When people highly value self-esteem, they may avoid doing things such as acknowledging a wrong they did. Admitting you were wrong may be uncomfortable for self-esteem at the moment, but ultimately it could lead to better learning, relationships, growth, and even future self-esteem."