My journey to San Francisco was everything I thought it would be and more. I met with friends, family, did lots of sightseeing, taught a workshop at Fort Mason Center, met with clients, and discussed various media projects with people from Los Angeles. The weather was picture perfect enhancing the time spent. My flights left on time and arrived early. I spend the first two days in the city at the Union Square Villa Florence and the rest of the week at a time share, 2 blocks off Fisherman's Wharf called The Suites at Fisherman's Wharf allowing me to explore different areas of the city.

I loved everything about San Francisco, except perhaps the steep hills, 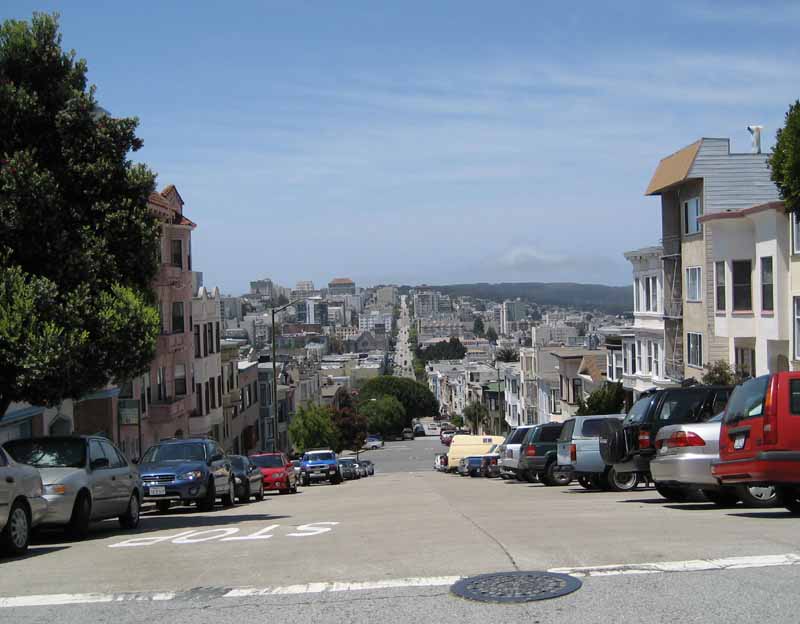 
I road in a cable car, trolley car, bus, and spend several hours with a crazy taxi driver who took me all over San Francisco on a private tour. The trolley car driver got into a discussion about Earth changes with one of the passengers and mentioned that within the course of one day, San Francisco now has 4 different seasons. 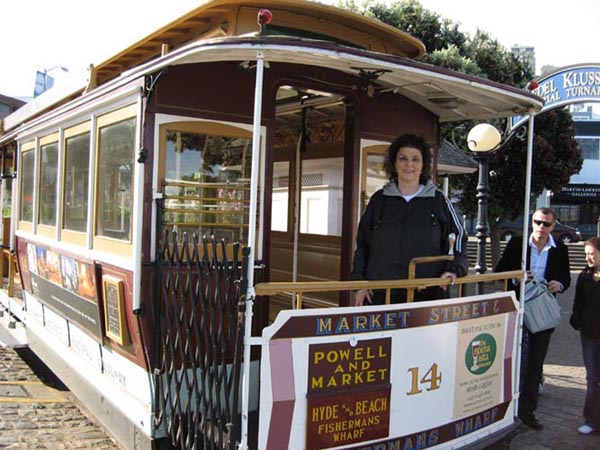 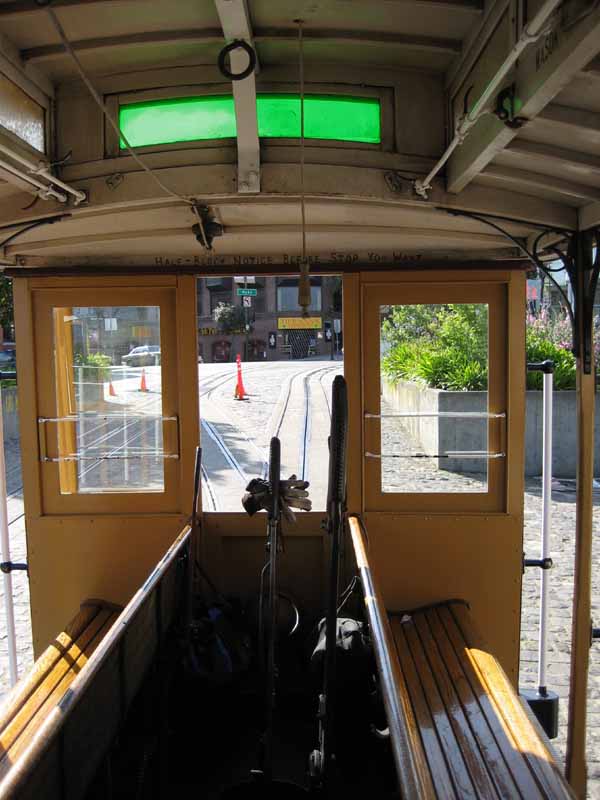 The taxi waited for me in front of 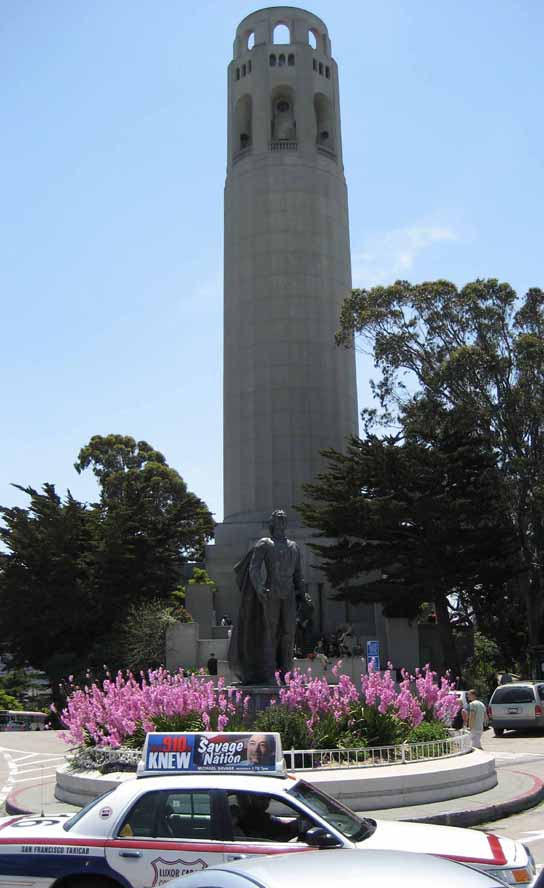 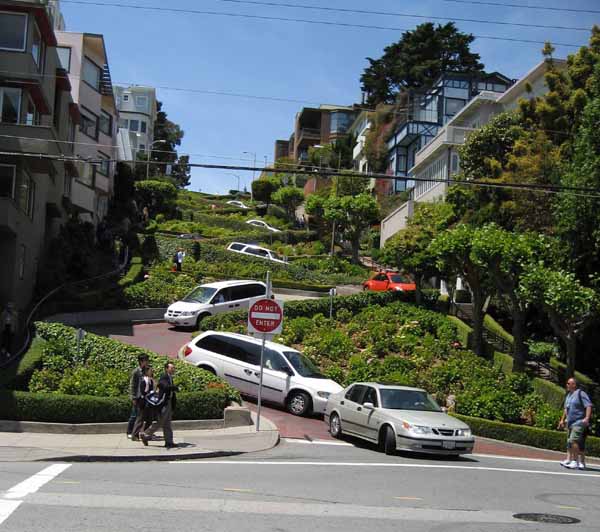 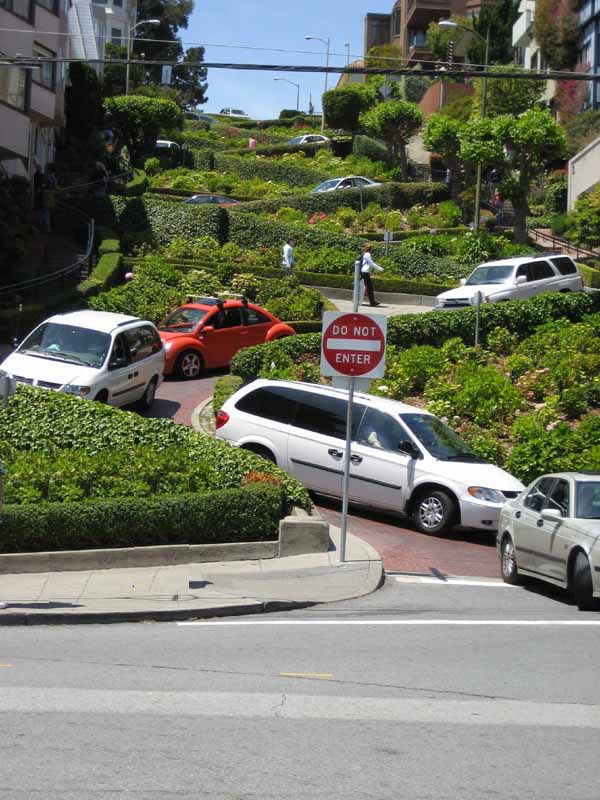 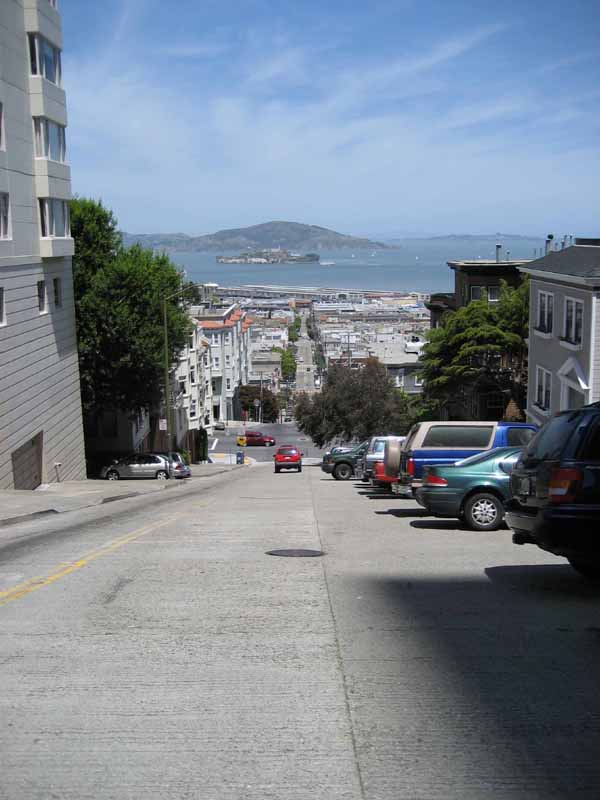 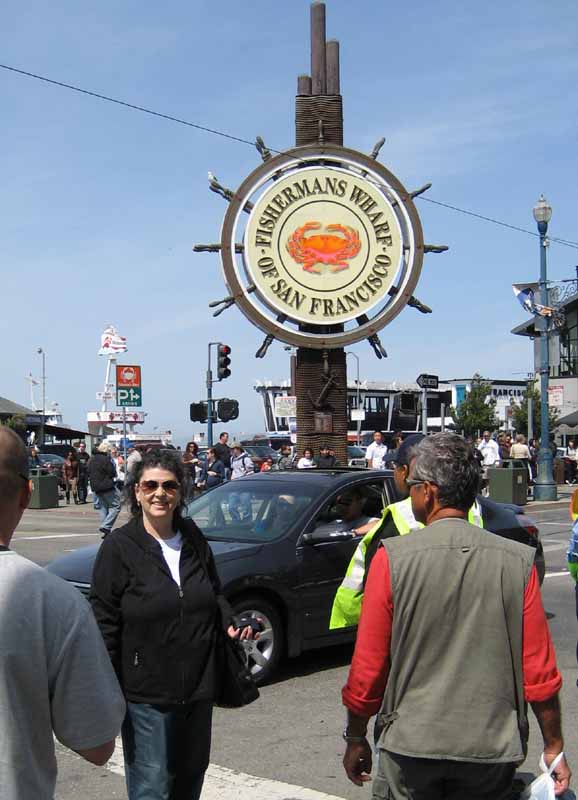 
While at an outdoor area eating a crepe, I met a famous doctor, Gerhard, from the Black Forest of Germany, where I had visited in 2005, one of my favorite places to visit. He sat down next to me to listen to the music while also eating a crepe. He was in San Francisco to attend an international medical convention linked to climate changes, his specialty is respiratory diseases which are on the increase due to climate changes. We walked and talked for hours, partaking in the afternoon events filled with music, food, shopping, and more. His take on the climate changes ... there's no going back ... my sentiments exactly. 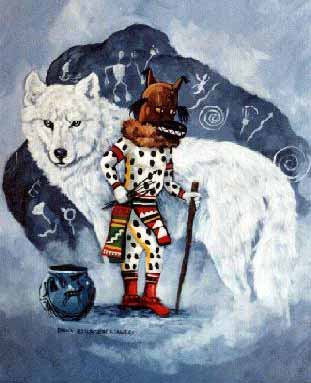 While Gerhard and I explored the endless venues at Fisherman's Wharf, I found a store featuring Native American Kachinas. Guided to go inside, I asked a Native American woman in her 50's, who worked there, if she had a blue kachina for sale. Her eyes lit up, her voice uplifting, as she talked about the blue kachina being rare and prophecies connected to her return. "You cannot find the blue kachina in a store," she said as if knowing where I was coming from, "but one day soon she will return."

This took me back to my experience in the Nevada desert in 1954 when I first remember meeting Z. It was during that time I was given a blue kachina doll which I treasured for many years. Not sure what happened to her, but it was all part of the moment, not the actual doll. Years later I would understand the message behind the blue kachina, when I interviewed a Native American shaman on my TV show, "The Metaphysical Experience." And so, on this day, the message was received ... the goddess within you, the higher frequency aspect of your soul will guide your journey home, where the kachina above, in the blue/white frequency (electromagnetic energy of creation), awaits.

Within Hopi mythology, the Kachinas are said to live on the San Francisco Peaks near Flagstaff, Arizona. The most important Hopi Kachinas are called wuya. The Zuni believe that the Kachinas live in the Lake of the Dead, a mythical lake which is reached through Listening Spring Lake located at the junction of the Zuni River and the Little Colorado River.

Legend has it that Kachinas are supernatural beings who inhabit men's bodies during part of the year. During Hopi religious ceremonies, the kachinas perform through the men they reside inside. There are hundreds of different kinds of katchinas--some are human, but many are animals or birds. The Hopi Mother Earth was symbolized by their Corn Mother, "Spider Woman, Sand Altar Woman, and other female spirits conceived to be the mothers of all living things. This mother is represented in the cult by the sipapuni, the opening in the floor of the underground ceremonial chamber, or kiva, for the sipapuni is the womb of Mother Earth, just as it is the hole through which humankind originally emerged from the underworld. For traditional Hopis, corn is the central bond. Its essence, physically, spiritually, and symbolically, pervades their existence. For the people of the mesas corn is sustenance, ceremonial object, prayer offering, symbol, and sentient being unto itself. Corn is the Mother in the truest sense that people take in the corn and the corn becomes their flesh, as mother milk becomes the flesh of the child." Traditionally the Hopis saw the goddess Spider Woman as their creator: "The Hopi see Spider Woman as Grandmother of the sun and as the great Medicine Power who sang the people into this fourth world we live in now". Under centuries of pressure by white culture, however, Spider Woman has recently turned male: "The Hopi goddess Spider Woman has become the masculine Maseo or Tawa..." 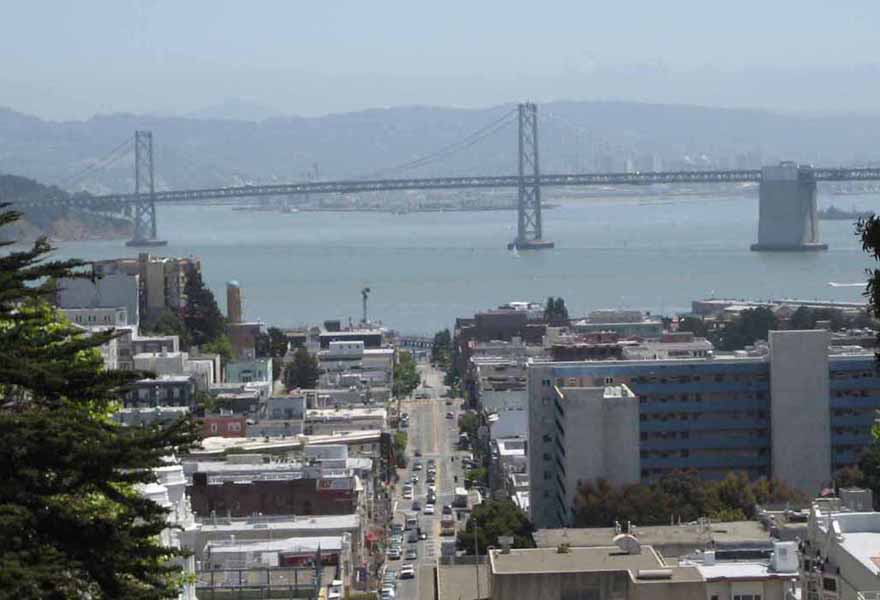 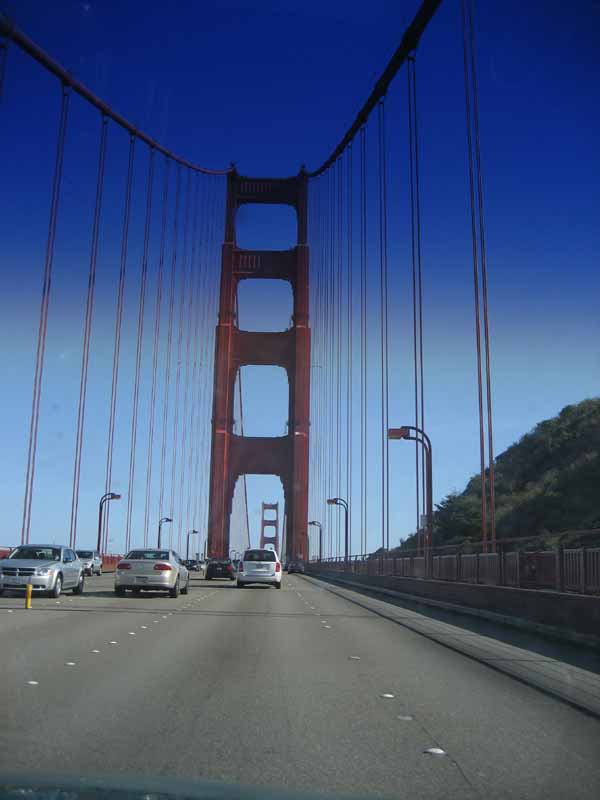 after the Verrazano Narrows Bridge in New York City. 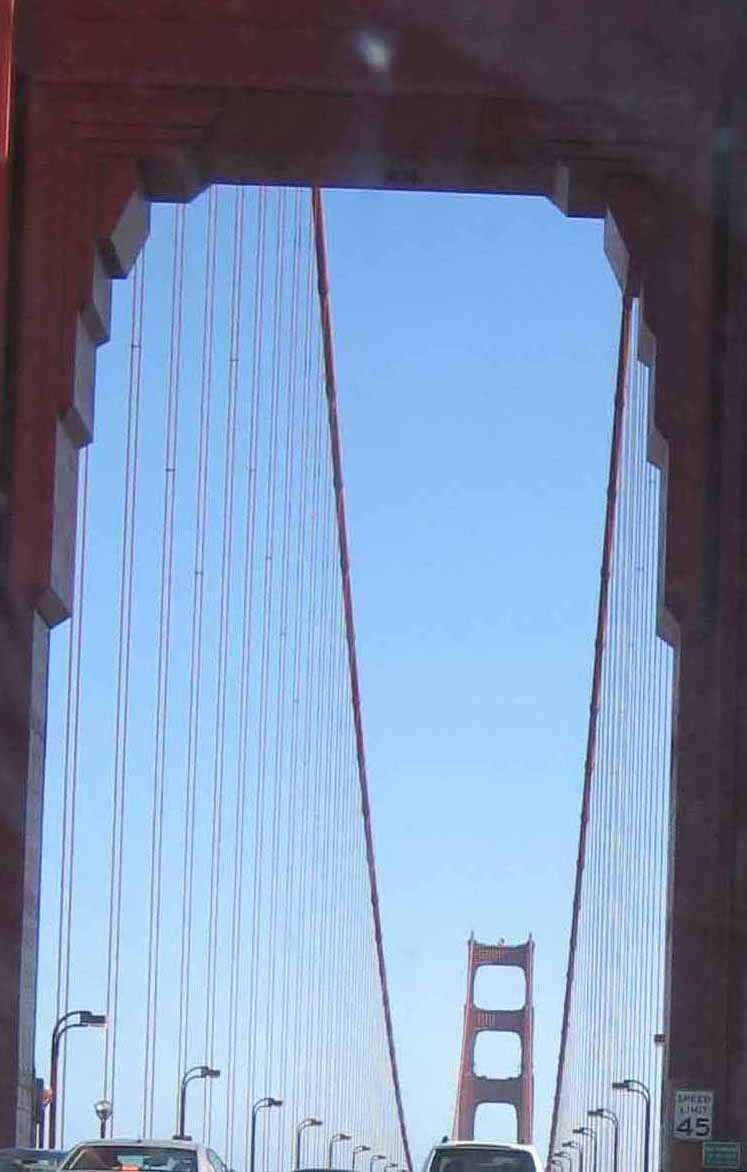 The weather was perfect each day, as if embracing my journey which took me over the Golden Gate Bridge,
then south along Pacific Coast Highway with my friend Chris.

He took me to lunch at the famous 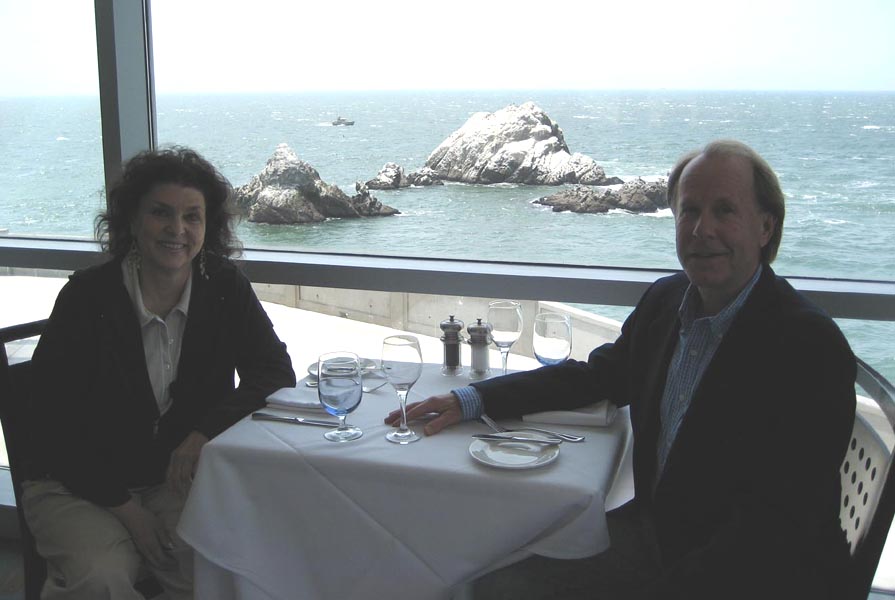 After lunch we continued our scenic journey south along the highways of life.


Dee and I drove north into the mountains, Inverness, to see the redwood trees. 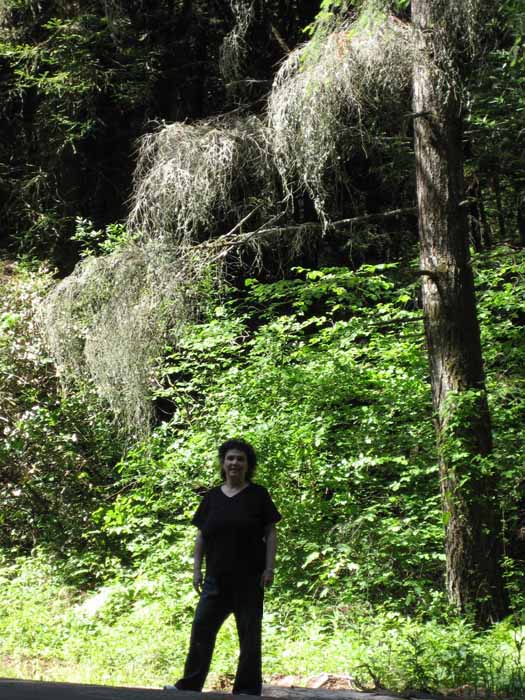 I loved this shaggy tree that glistened in the sunlight like soul sparks.

It reminded me of my favorite tree at Lyndhurst Castle in New York.

Dee preferred to hug a tree. 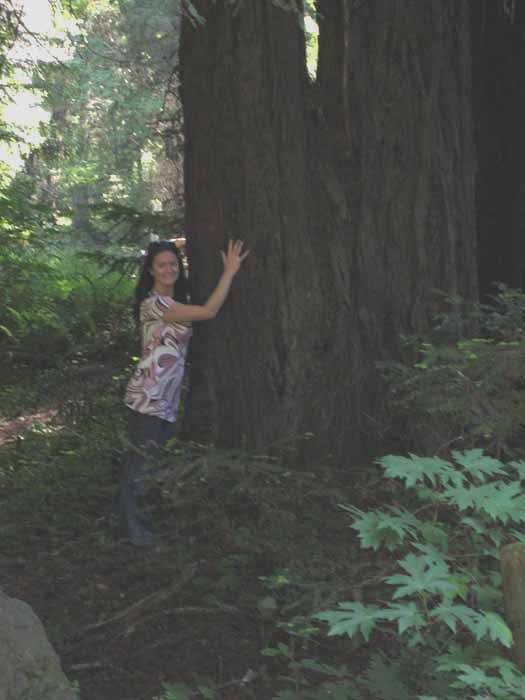 We visited Dee's friend Bob who does rebirthing. My take on rebirthing is not about pain, but remembering one's consciousness spiraling into their physical body in this reality. I have always remembered being killed in the last lifetime and spiraling into my Ellie Crystal physical experience to complete a mission that began in that timeline and now comes full circle. How easily we move from body to body, shedding each life as if an iguana shedding its skin. If you're hanging on to this one, your program has more drama to experience. Pain and suffering can be transmuted to positive emotions and experiences. Just stick with the program.

The time and timing of my trip were perfect and perfected. The energies seemed to open a Gateway that brings my work full cycle. You can feel and sense that it is all going to happen. The people I met, media projects moving forward, the students in my workshop and the clients I read, were most gracious and totally amazing. The workshop covered many topics, from personal evolution, to that of the program itself, touching on many topics I discuss in Crystalinks. This easily could have been a weekend workshop and I am considering a slide show should I take my act on the road again. After years of teaching different topics, the time has come to combine everything into one venue, as students and teacher shared an afternoon together to focus on the future of humanity as foretold by prophecies throughout history.


Email from one of the students:

I want to express my sincere thank you for a most wonderful workshop! I found it very informative and enlightening. The timing was simply excellent in relation to my own place in the game and my own Spiritual Journey which grows exponentially with every amazing synchronistic moment. Crystalinks is a wonderful site for me. Thank you again. I really resonate with your views and directions. When I am in NY in the future, I will definitely set up an appt. with you.

Special thanks to Dee and Robin who helped put the workshop together. 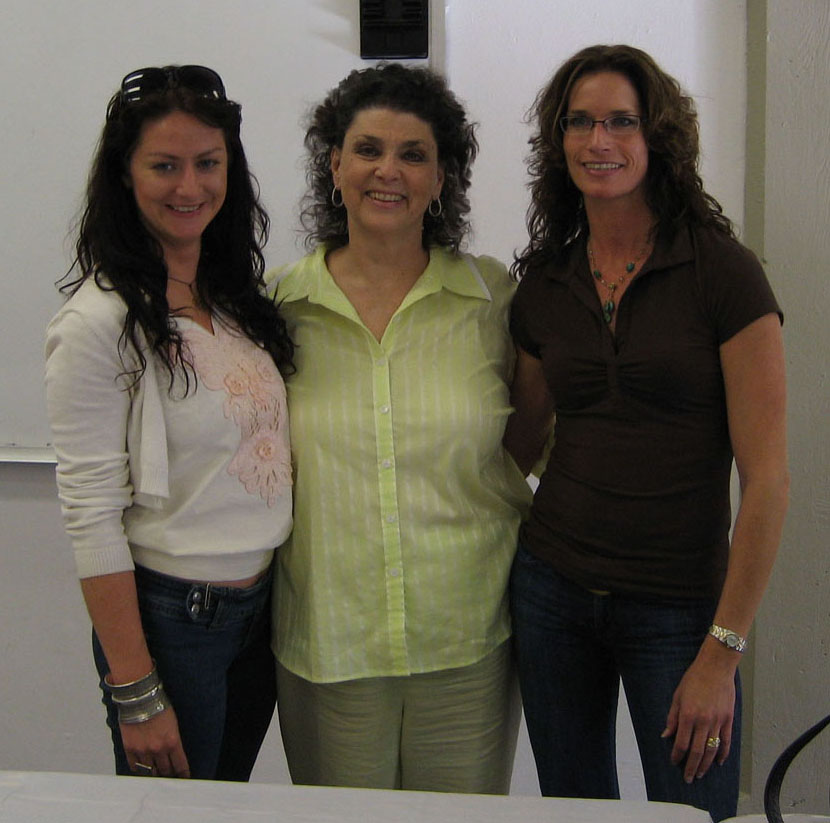 We sold all the copies of my book Sarah and Alexander.

In all the trip was awesome, though my heart remains at home in New York City.