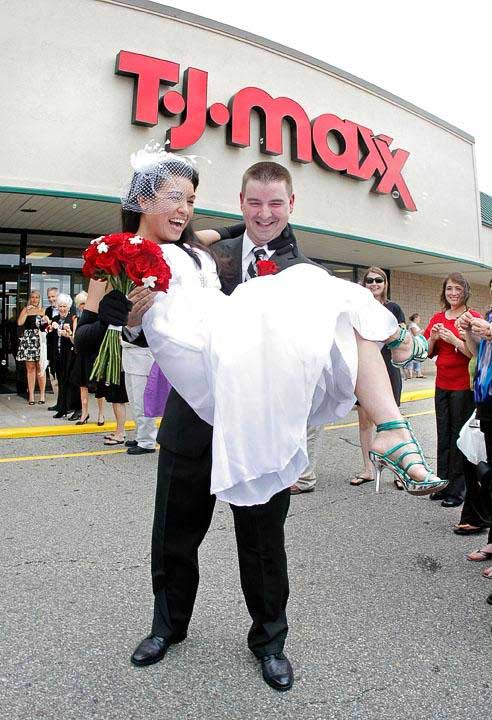 We've heard of, and attended, traditional weddings. Many of us have been down the aisle on one or more occasions. Some of you may be planning a wedding, or know someone who is.

You've heard of all sorts of wedding types - the destination wedding becoming more popular due to the romantic element - sometimes local - but often far away which can be costly to those who have to travel.

With the recession, the Retail Wedding is fast becoming a trend. Instead of traditional ceremonies in a church or banquet hall, a growing trend in the world of matrimony includes couples tying the knot in their favorite retail spots. The shops range from T.J. Maxx, Home Depot, to Taco Bell, and they all combine the couple's love for a brand with a desire to have a wedding with a personal twist. The saving can be small or in the thousands.

Below are several wedding types and styles. A wedding may include several of these aspects.

Civil Wedding
A civil wedding is a ceremony presided over by a local civil authority, such as an elected or appointed judge, Justice of the Peace or the mayor of a locality. Civil wedding ceremonies may use references to God or a deity (in UK law), but generally no references to a particular religion or denomination. They can be either elaborate or simple. Many civil wedding ceremonies take place in local town or city halls or courthouses in judges' chambers.

Elopement
Eloping is the act of getting married, often unexpectedly, without inviting guests to the wedding. In some cases a small group of family and/or friends may be present, while in others, the engaged couple may marry without the consent and/or knowledge of parents or others. While the couple may or may not be widely known to be engaged prior to the elopement, the wedding itself is generally a surprise to those who are later informed of its occurrence.

Same-sex Wedding
A same-sex or same-gender wedding is a ceremony in which two people of the same sex are married. This event may be legally documented as a marriage or another legally recognized partnership such as a civil union. Where such partnerships are not legally recognized, the wedding may be a religious or symbolic ceremony designed to provide an opportunity to make the same public declarations and celebration with friends and family that any other type of wedding may afford. These are often referred to as "commitment ceremonies."

Officiants at same-sex weddings may be religiously ordained. Many religions and branches of religions, including Quakers, Unitarians, Ethical Culture, Reform and Reconstructionist Jews,the Episcopal Church, the Metropolitan Community Church, and the Reformed Catholic Church perform and recognize same-sex marriages, even if the government of their geographic area may not.

Destination Wedding
Not to be confused with an elopement, a destination wedding is one in which a wedding is hosted, often in a vacation-like setting, at a location to which most of the invited guests must travel and often stay for several days. This could be a beach ceremony in the tropics, a lavish event in a metropolitan resort, or a simple ceremony at the home of a geographically distant friend or relative. During the recession of 2009, destination weddings continued to see growth compared to traditional weddings due to their typically lower costs.

White wedding
A white wedding is a term for a traditional formal or semi-formal Western wedding. This term refers to the color of the wedding dress, which became popular after Queen Victoria wore a pure white gown when she married Prince Albert, and many were quick to copy her choice. At the time, the color white to many symbolized both extravagance and sexual purity, and had become the color for use by girls of the royal court. Though white no longer symbolizes the same ideas today, the color remains the most popular choice for first time brides in the west.

Weekend Wedding
A weekend wedding is a wedding in which couples and their guests celebrate over the course of an entire weekend. Special activities, such as spa treatments and golf tournaments may be scheduled into the wedding itinerary. Lodging usually is at the same facility as the wedding and couples often host a Sunday brunch for the weekend's finale.

Double wedding
A double wedding is a single ceremony where two affianced couples rendezvous for two simultaneous or consecutive weddings. Typically, a fiancŽ with a sibling who is also engaged might plan a double wedding where both couples legally marry.

Wedding customs around the world 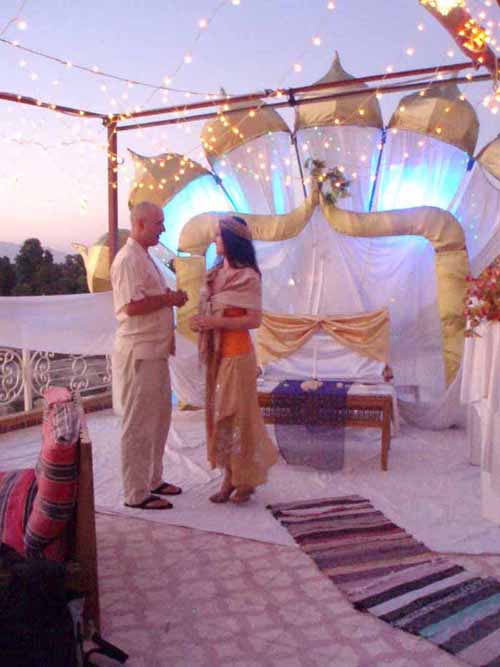 My friend Dee, presides over a wedding in Luxor - September 2010