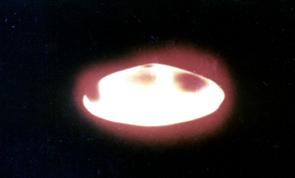 Plasma craft are part of pseudoscience. This photo of an alleged plasma craft was taken by Carlos Diaz in 1994, near his home in Tepetzlan, Mexico. Carlos claims to have had contacts with this race of "ETs" for over 17 years. Carlos has never been told what they are called or where they are from, but on his contact trips he goes aboard the craft and they take him inside the Earth. Here he claims to see great "Halls of Remembrance" filled with flora, fauna, music and samples of all life forms on the surface. These will be used to repopulate the world if, as they fear, Mankind destroys the surface of the planet. This is old theory of good aliens, bad aliens, humans needing to clean up their act or else! Forget it and move to science. The sighting of plasma craft most likely has a scientific explanation that goes to ball lightning and plasma physics an interesting topic.

Photographs with orbs, are sometimes mistaken for UFOs also.