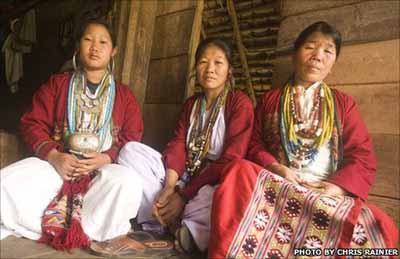 Researchers have identified a language new to science in a remote region of India. Known as Koro, it appears to be distinct from other languages in the family to which it belongs; but it is also under threat.

Koro was discovered by a team of linguists on an expedition to Arunachal Pradesh, in north-eastern India. The team was part of National Geographic "Enduring Voices" project on threatened indigenous languages. The researchers were searching for two other little-known languages spoken only in one small area. As they heard and recorded these, they found a third which was completely new to them and had never before been listed. "We didn't have to get far on our word list to realise it was extremely different in every possible way," said Dr David Harrison, one of the expedition leaders.

The linguists recorded thousands of words- and found Koro was distinct from other languages in the area. It belongs to the Tibeto-Burman family, which includes around 150 languages spoken in India. But scientists were unable to find any others closely related to Koro within this group.

It is thought that around half of the world's 6,909 known languages are endangered and Koro itself is vulnerable. It has never been written down and is only spoken by between 800 and 1,200 people. "We were finding something that was making its exit, was on its way out," said National Geographic Fellow Gregory Anderson. "And if we had waited 10 years to make the trip, we might not have come across close to the number of speakers we found."

The team will be returning to India next month to continue their research on Koro. They want to find out more about where it came from and how it was able to remain hidden until now.

Last speaker of ancient language of Bo dies in India   BBC - February 4, 2010
The last speaker of an ancient language in India's Andaman Islands has died at the age of about 85, a leading linguist has told the BBC. The death of the woman, Boa Senior, was highly significant because one of the world's oldest languages, Bo, had come to an end, Professor Anvita Abbi said. She said that India had lost an irreplaceable part of its heritage. Languages in the Andamans are thought to originate from Africa. Some may be up to 70,000 years old. The islands are often called an "anthropologist's dream" and are one of the most linguistically diverse areas of the world.


The tragedy of dying languages   BBC - February 5, 2010
The death of the last speaker of an ancient language in India's Andaman Islands highlights the fact that half of the world's 7,000 languages are in danger of disappearing. Linguist K David Harrison argues that we still have much to learn from vanishing languages. My journey as a scientist exploring the world's vanishing languages has taken me from the Siberian forests to the Bolivian Altiplano, from a McDonald's in Michigan to a trailer park in Utah. In all these places I've listened to last speakers - dignified elders - who hold in their minds a significant portion of humanity's intellectual wealth.


The death of language?   BBC - October 5, 2010
An estimated 7,000 languages are being spoken around the world. But that number is expected to shrink rapidly in the coming decades. What is lost when a language dies? In 1992 a prominent US linguist stunned the academic world by predicting that by the year 2100, 90% of the world's languages would have ceased to exist.


What ever happened to the