The Nineteenth Dynasty of ancient Egypt was one of the periods of the Egyptian New Kingdom. Founded by Vizier Ramesses I, whom Pharaoh Horemheb chose as his successor to the throne, this dynasty is best known for its military conquests in Canaan.

The warrior kings of the early 18th Dynasty had encountered only little resistance from neighboring kingdoms, allowing them to expand their realm of influence easily. The situation had changed radically towards the end of the 18th Dynasty. The Hittites gradually extended their influence into Syria and Canaan to become a major power in international politics, a power that both Seti I and his son Ramesses II would need to deal with.

The Pharaohs of the 19th dynasty ruled for approximately one hundred and ten years: from ca 1298 to 1187 BCE. The dates and names in the table are taken from Dodson and Hilton. Many of the pharaohs were buried in the Valley of the Kings in Thebes (designated KV). More information can be found on the Theban Mapping Project website.

New Kingdom Egypt reached the zenith of its power under Seti I and Ramesses II ("The Great"), who campaigned vigorously against the Libyans and the Hittites. The city of Kadesh was first captured by Seti I before this king decided to concede it to Muwatalli of Hatti in an informal peace treaty between Egypt and Hatti. Ramesses II later attempted unsuccessfully to alter this situation in his fifth regnal year by launching an attack on Kadesh in his Second Syrian campaign in 1274 BC, and was caught in history's first recorded military ambush, but thanks to the arrival of the Ne'arin, Ramesses was able to rally his troops and turn the tide of battle against the Hittites.

Ramesses II later profited from the Hittites' internal difficulties during his eighth and ninth regnal years, when he campaigned against their Syrian possessions, capturing Kadesh and portions of Southern Syria, and advancing as far north as Tunip where no Egyptian soldier had been seen for 120 years. He ultimately accepted that a campaign against the Hittites was an unsupportable drain on Egypt's treasury and military.

In his 21st regnal year, Ramesses signed the first recorded peace treaty with Urhi-Teshub's successor, Hattusili III and with that act Egypt-Hittite relations improved significantly. Ramesses II even married two Hittite princesses, the first after his second Sed Festival. At least as early as Josephus, it was believed that Moses lived during the reign of Ramesses II.

This dynasty declined as internal fighting between the heirs of Merneptah for the throne increased. Amenmesse apparently usurped the throne from Merneptah's son and successor, Seti II, but he ruled Egypt for only 4 years. After his death, Seti regained power and destroyed most of Amenmesse's monuments. Seti was served at Court by Chancellor Bay, who was originally just a 'royal scribe' but quickly became one of the most powerful men in Egypt gaining the unprecedented privilege of constructing his own tomb in the Valley of the Kings (KV17). Both Bay and Seti's chief wife Twosret reportedly had a sinister reputation in Ancient Egyptian folklore. After Siptah's death Twosret ruled Egypt for two more years, but she proved unable to maintain her hold on power amid the conspiracies and power plays being hatched at the royal court. She was likely ousted in a revolt led by Setnakhte, founder of the Twentieth Dynasty. 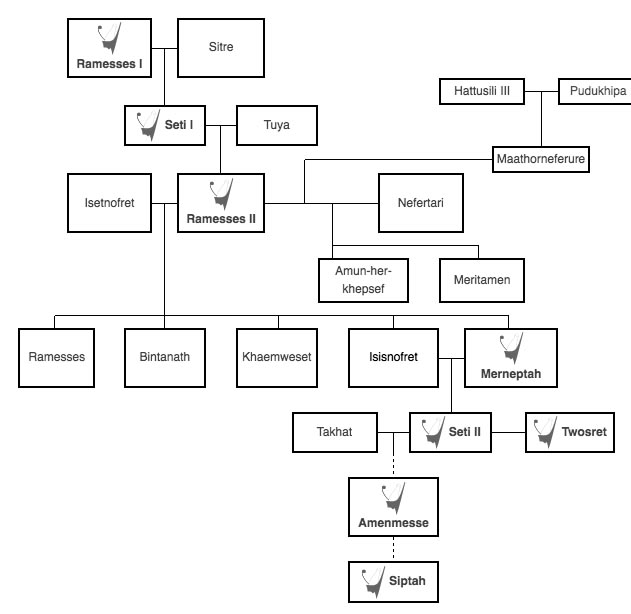 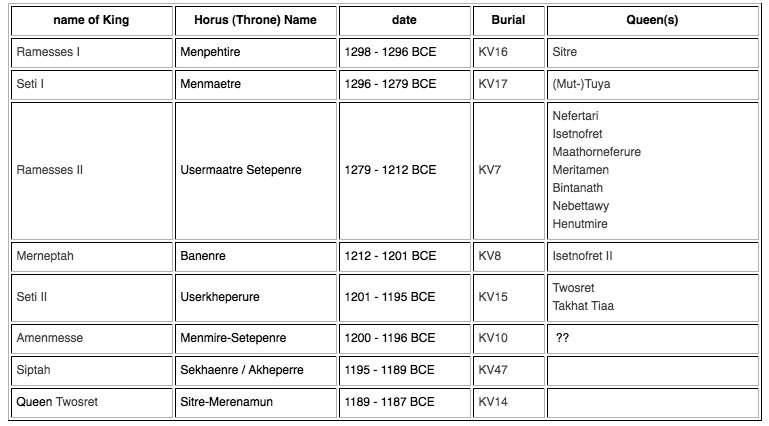