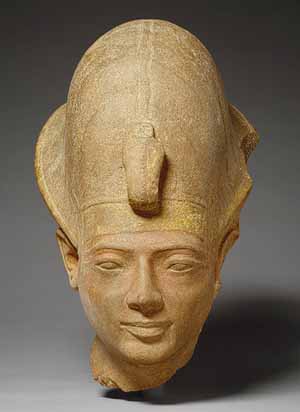 Amenmesse (also Amenmesses or Amenmose) was the 5th ruler of the Nineteenth Dynasty in Ancient Egypt, possibly the son of Merneptah and Queen Takhat. Others consider him to be one of the innumerable sons of Ramesses II. Very little is known about this king, who ruled Egypt for only three to four years. Various Egyptologists date his reign between 1202 BC - 1199 BC or 1203 BC - 1200 BC with others giving an accession date of 1200 BC. Amenmesse means "born of or fashioned by Amun" in Egyptian. Additionally, his nomen can be found with the epithet Heqa-waset, which means "Ruler of Thebes". His royal name was Menmire Setepenre.

It is likely that he was not Merneptah's intended heir. Some scholars such as Kenneth Kitchen and Jurgen von Beckerath follow the traditional view that Amenmesse usurped the throne from Seti-Merneptah, Merneptah's son and Crown Prince who should have been next in line to the royal succession. It is unclear why this should have happened. Kitchen has written that Amenmesse may have taken advantage of a momentary weakness of Seti-Merneptah or seized power while the crown prince was away in Asia.

Seti-Merneptah was most likely the same man as king Seti II, whose reign was traditionally thought to have followed upon Amenmesse's reign. The cartouches of Seti II's tomb in Upper Egypt were deliberately erased and then repainted, suggesting that Seti's rule in Upper Egypt was temporarily interrupted by agents of his half-brother. Confusion generally clouds Amenmesse's reign and location within the Egyptian 19th Dynasty.

However, an increasing number of Egyptologists today such as Rolf Krauss and Aidan Dodson maintain that Seti II was in fact the immediate successor of Merneptah "without any intervening rule by Amenmesse." Under this scenario, Amenmesse did not succeed Merneptah on the throne of Egypt and was rather a rival king who usurped power sometime during Years 2 to 4 of Seti II's reign in Upper Egypt and Nubia where his authority is monumentally attested.

Amenmesse was documented in power at Thebes during his third and fourth year (and perhaps earlier in Nubia) where Seti II's Year 3 and Year 4 are noticeably unaccounted for. The treatment of Amenmesse as a rival king also best explains the pattern of destruction to Seti II's tomb which was initially ransacked and later restored again by Seti II's officials.

This implies that the respective reigns of Amenmesse and Seti II were parallel to one another; Seti II must have initially controlled Thebes in his first and second years during which time his tomb was excavated and partly decorated. Then Seti was ousted from power in Upper Egypt by Amenmesse whose agents desecrated Seti II's tomb. Seti would finally defeat his rival Amenmesse and return to Thebes in triumph whereupon he ordered the restoration of his damaged tomb.

Rolf Krauss, followed by Aidan Dodson, suggests that Amenmesse was once a Kushite Viceroy called Messuwy. In particular, two representations of Messuwy on the temple of Amida allegedly shows that a royal uraeus had been added to his brows in a way consistent with other pharaohs such as Horemheb, Merenptah and some of the sons of Rameses III. Also an inscription at the temple of Amada also calls him "the king's son himself" but this may be merely a figure of speech to emphasize Messuwy's high stature as Viceroy under Merneptah.

However, Frank Yurco notes that various depictions of Messuwy in several Nubian temples were never deliberately defaced by Seti II's agents compared to the damnatio memoriae meted out to all depictions of another Viceroy of Kush, Kha-em-ter, who had served as Amenmesse's Vizier. This strongly implies that Seti II held no grudge against Messuwy which would be improbable if Messuwy was indeed Amenmesse. Yurco also observes that the only objects from Messuwy's tomb which identified a Pharaoh all named only Merneptah, Seti II's father which leads to the conclusion that Messuwy died and was buried in his tomb at Aniba, Nubia during Merneptah's reign, and could not be Amenmesse.

There has also been a suggestion that the story of the "Tale of Two Brothers", first attested during the reign of Seti II, may contain a veiled reference to the struggle between Amenmesse and Seti II.

The records of a court case early in the reign of Seti II also throw some light on the matter. Papyrus Salt 124 records that Neferhotep, one of the two chief workmen of the Deir el-Medina necropolis, had been killed during the reign of Amenmesse (the king's name is written as 'Msy' in the document).

Neferhotep was replaced by Paneb his adopted son, against whom many crimes were alleged by Neferhotep's brother Amennakhte in a strongly worded indictment preserved on a papyrus in the British Museum. If Amennakhte's allegations can be trusted, Paneb had stolen stone for the embellishment of his own tomb from that of Seti II in the course of its completion, besides purloining or damaging other property belonging to that monarch.

Also he had allegedly tried to kill Neferhotep in spite of having been educated by him, and after the chief workman had been killed by 'the enemy' had bribed the vizier Pra'emhab in order to usurp his place. Whatever the truth of these accusations, it is clear that Thebes was going through very troubled times. There are references elsewhere to a 'war' that had occurred during these years, but it is obscure to what this word alludes, perhaps to no more than internal disturbances and discontent.

Neferhotep had complained of the attacks upon himself to the vizier Amenmose, presumably a predecessor of Pra'emhab, whereupon Amenmose had Paneb punished. Paneb, however, then successfully brought a complaint before 'Mose'/'Msy' whereupon the latter decided to dismiss Amenmose from office. Evidently this 'Mose'/'Msy' was a person of the highest importance here who most probably should be identified with king Amenmesse himself.

His mother is known to be Queen Takhat, who was either a minor wife of Merneptah or a later royal wife of Ramesses II or both. Some have assumed that Twosret, wife of Seti II, was his sister, making him half-brother to Seti II. Amenmesse's wife was once thought to be a woman named Baktwerel but more recent analysis of his royal tomb proves that she was not a contemporary of this Pharaoh.

Six quartzite statues originally placed along the axis of the hypostyle hall in the Amun Temple at Karnak are thought to be his, although these were defaced and overwritten with the name of Seti II . One of these statues, with the inscription, "the Great Royal Wife Takhat", lends credence to the argument that a Takhat was Amenmesse's wife. Amenmesse was also responsible for restoring a shrine dating from Thutmose III that stands before a temple at Tod.

There is confusion about the events surrounding his death. His mummy was not amongst those found in the cache at Deir el Bahri, and from the destruction of his tomb in the Valley of the Kings, it is assumed that Seti II took revenge upon his usurping half-brother. 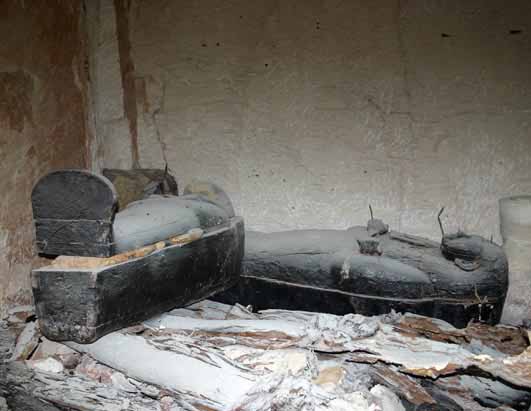 Amenmesse was buried in a rock-cut tomb in the Valley of the Kings which is now identified as Tomb KV10. However, almost all of its texts and scenes were either erased or usurped by Seti II's agents. No mention of Amenmesse was spared. A number of officials associated with Amenmesse were also attacked or replaced, chief among them being the Theban High Priest of Amun, Roma-Roy, and Kha-em-ter, a former viceroy of Kush.

Amenmmesse's tomb was also opened in antiquity. While the remains of three mummies were found in this tomb, two women and one man, it is uncertain if any of these remains belong to Amenmesse, Takhat or the later Baketwerel without further testing or whether they were later intrusions. It seems more likely, however, that Seti II had Amenmesse's remains desecrated since his mummy was never found "in either of the two great caches of royal mummies found in 1881 and 1901"

Surviving inscriptions mentioning Takhat's name along with the wall inscriptions suggest she was buried in Amenmesse's tomb. Artifacts from the tombs of Seti I and Rameses VI were also found in the KV10 tomb adding to the uncertainty.

After his death, Seti II also conducted a damnatio memoriae campaign against the memory of Amenmesse's Vizier, Kha-em-ter. Egyptologist Frank Yurco notes that Seti II's agents erased all of Kha-em-ter's depictions and inscriptions - even those that Kha-em-ter had inscribed when he served as a Viceroy in Nubia. It is possible that Siptah, the Pharaoh who succeeded Seti II was the son of Amenmesse and not of Seti II. A statue of Siptah in Munich shows the Pharaoh seated in the lap of another, clearly his father. The statue of the father, however, has been completely destroyed.

The tomb is a fairly simple affair, and as stated, unfinished. Three descending corridors lead down to a room where the ritual shaft was to be dug, but never was. Within these corridors, we find scenes of king Amenmesses (destroyed) before Re-Horakhty, scenes from the Litany of Re and the Amduat
.

After the shaft room, where the tomb becomes level, is the first four pillared hall, with several more scenes. They include Baketwerel making offerings before the gods, and scenes from the Book of the Dead.

Later, the outer corridors, shaft room and four pillared hall were plastered over and redecorated for Takhat and Baketwere, who we know were royal women. We just do not know their exact position in regards to their son and husband, because the redecoration calls into question their relationship to Amenmesses. Some of this later decoration has fallen off, so that now we find some of the original and some of the later decorations.

However, fragments of canopic jars and part of a red granite sarcophagus lid, usurped itself from someone named Anketemheb, both inscribed with the name of Takhat, probably indicate that at least she was buried here, so one of the mummies may be hers. Little else has been found (and at least reported at this time). Much of what was found within the tomb was actually intrusive, including fragmentary shabti figures from Seti I, sarcophagus fragments of Ramesses VI and a few other items.