The Crystal and the Obelisk 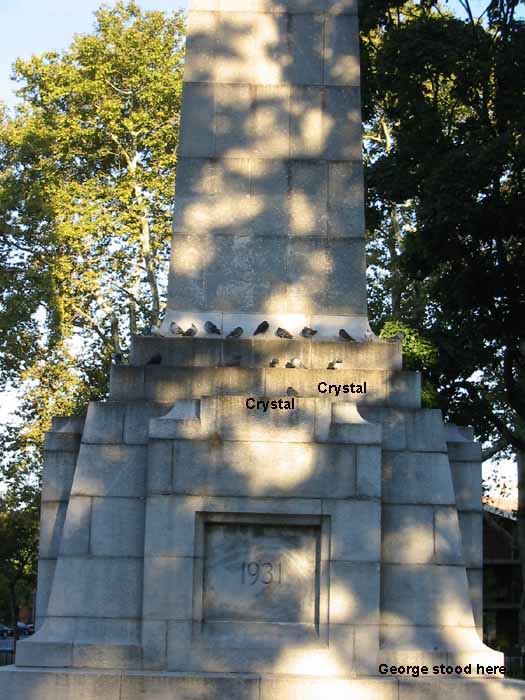 The energies in my home and immediate area began to build for my upcoming workshop next Sunday, when a friend named Bob came by for a visit on Sunday. They continued Monday with Pat's visit.

Tuesday I spent the afternoon with George preparing for the workshop. We organized the visual aids, notes and music. The energies became so strong as we sat at the kitchen table, George felt Z's energies blend with his as I saw DNA symbols and knew something special was going to happen.

George and I next headed down to Cannonball Park across the street where I had gone with Bob two days ago.

Before leaving my home, we both were guided to take 2 clear quartz crystals with us to set up some sort of energy field for the workshop. It's the most incredible feeling when you look at someone and each of you telepath the same idea at the same time. 2 four-inch clear quartz crystals, that had been here since the June '04 workshop called to me. Their energies seemed perfect as they are about the heart center, Venus, Venus rules Libra and we are now in Libra, balance, return of the goddess.

We checked out the area where Robert will create the labyrinth on the east side of the obelisk.

In a straight line with the obelisk, are 7 central turning points in a line. Each will have a colored square representing one of the seven chakras, in order, to further balance the brain and energy centers of each person's body. As George and I walked through this energetic labyrinth, we could feel the subtle and physical changes in our bodies.

From there we walked into the park to better partake of the elements.

On the ground, I found what was probably the last dandelion for this season, and picked it. Was Z bringing me another flower? Before I could get an answer from Z, simultaneously, I heard Z and George say, "Dandelions are free!" Remember that? And so they shall be....

I haven't had that vision in a long time, but when I do, the flowers look like soul sparks.

George and I walked to the obelisk trying to decide where to place the 2 crystals. We thought about burying them, but that seemed wrong.

"Put them on one of the ledge!" we said in unison.

But how do we get the crystals up so high?

This is one tall obelisk....

I asked 'Z' for help and he heard me.

The birds in the pictures I took this morning were not in the park yesterday.

It was just George and I and an old slim man with long gray hair, reading a book, and watching us out of the corner of his eye.

Intuitively we knew George would be the one to set the energies into the crystal .... but he would have 'help'.

He walked to the north side of the obelisk, the right side on your screen.

Placing his intent into the first crystal, he tossed it up toward to the first tier of the obelisk. 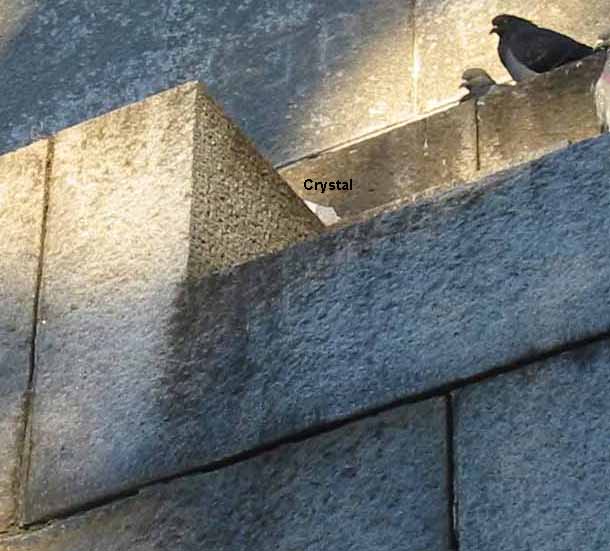 Much to our surprise, it landed facing outward, toward us on the ledge. Now what of the odds of that happening? I suppose they increase when spirit guides.

We laughed and moved on to the next crystal and the south side of the obelisk.

Again George silently placed his intent into the crystal, hoping it would land on the opposite ledge, balance.

In the picture I took this morning, the sun is shining just below the area where the crystal landed.

This area of Brooklyn, Bay Ridge, links with the American Revolution, the Old World Orders, Freemasonry, the blueprint of creation, and of course the path of the bloodline.

This morning as I wrote the text on the photo above, George stood here, someone whispered in my ear, "George slept here..." referring to George Washington .... shades of grids that 'bleed' ... as in bloodline, into our reality.

Back in the park, George and I set the energies in place, connecting a grid from the crystals and obelisk to my apartment. We then headed back upstairs giggling about the entire incident.