Tips From Ellie and Dr. Oz on Dealing With a Cold 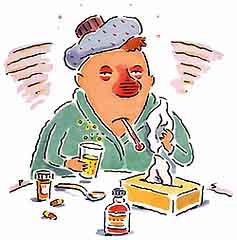 As I passed a local Rite-aid store here in Brooklyn, I noticed the sign that always makes me pause and wonder each year: "Flu Shots Given Today". I have never taken a flu shot and had the flu only once - January 1, 2000. Maybe that set up an immunity, not really sure, and will probably never know. My need to take a flu shot, of any kind, feels wrong. That does not mean others shouldn't follow their instincts and take a flu shot each year.

As to catching colds, I try my best to avoid people who have them, but like most, I am out and about and you never know. I try not to share food with others as that seems to be the way I catch a cold vs. a air-borne virus. I don't do the 'washing your hands' thing to stay healthy that others suggest.

In 2010 we are all experienced in preventing the common cold and in knowing the best way to deal with one having been there in the past.

You attack the problem, after a few seconds of cursing.

The battle is on. Did it start with a sore throat? Then you are mentally prepared for the inevitable.

Plans may have to change. Sometimes you are happy about that, reasoning that you got the cold in the first place to avoid doing something ... (we are all life coaches and healers).

Speaking of healing ... should you Reiki yourself? (sounds sexy, but isn't) use another technique? envision yourself better? use crystals or other tools? Don't go crazy with this...

Okay .. now who do you avoid? Don't you already know?

Prepare your tissues (is this an "issues with tissues" moment?) and other 'get well' foods and remedies.

Important ... Keep your physical environment at a comfortable temperature. That is a major guide to good health all the time.

Sleep .. Sleep some more. During this time, consider synchronicities that seem to find you when you get sick ... people, situations, more.

Drink lots of water. Doesn't everybody say and do that?

Family remedies? Sure why not !

There's nothing wrong with a decongestant and a little nasal spray if needed. You will not get addicted and will breath better.

Most importantly do not to let the cold settle in your lungs ... then you're really screwed for weeks to come.

Alas ... you know you will survive so shape up and get over it and feel better soon.

What do I do? Claritin ... Afrin ... lots of water and rest. My colds last 7 days from start to finish. I'm one of those people who likes to be left alone when sick. I heal best that way. Others like to be nurtured and seek attention. That drives me crazy.


Below are some helpful tips from Dr. Oz on avoiding a cold this winter. About echinacea - it never worked for me either - makes me sick. Then again, I don't do well with any health food products. His suggestions are just that with no guarantee. When the body needs rest due to stress, it will find a way to force the issue.

Every year I dread cold and flu season - not just because I hate feeling sick but because, like most of you, I'm already spread thin between work and family responsibilities; being stuck in bed for days just isn't an option. Luckily, over the years, I've picked up a few scientifically proven tricks that have helped me stay healthy when the mercury drops.


Have H2O in Flight 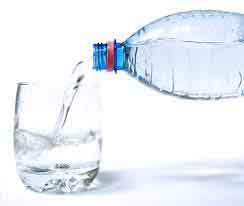 Canadian researchers have found that air passengers are over 100 times more likely to get a cold than those who travel by bus, train, or subway. My rule for holiday air travel: Hydrate. The plane's dry air can sap moisture from the lining of your nasal passages, creating tiny cracks that make you susceptible to infection. Water can help moisten those membranes.


Forget Echinacea
There's actually no conclusive research proving echinacea to be effective against the common cold. What do I take instead? Vitamin D. Studies have found that D can stimulate the production of a virus-killing protein, and taking D supplements (aim for 2,000 IU a day) can lead to fewer viral infections.


Brave the Cold
No matter how low the temperature, I take a brisk walk every day. Exercise boosts the circulation of immune cells throughout the body, and research shows that walking 30 to 45 minutes a day, five days a week in winter can cut your sick days in half.


Warm Up with Tea 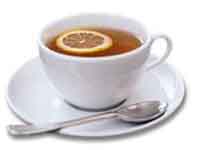 New research from the University of Michigan supports the growing body of evidence that the antioxidant quercetin may protect against infection by preventing viruses from replicating. Black and green teas are packed with quercetin, so sip a hot cup once a day.


Avoid Antibiotics
These drugs are not only ineffective against the flu - which is caused by a virus, not by bacteria - but can lead to adverse effects like upset stomach, diarrhea, and even yeast infections. If you get the flu, ask your doctor for an antiviral drug such as Tamiflu. But act fast - studies have found that these drugs work best within 48 hours of the first symptoms.


Dodge Germs
Flu viruses can survive on surfaces for over two hours, but you can't wash your hands 24-7 - so when is it most important to scrub up? Scientists from the University of Virginia recently pinpointed the areas of your home most likely to harbor germs: refrigerator handles, remote controls, and doorknobs. 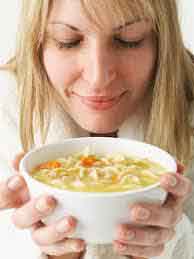 Chicken soup really can treat a cold. The hot vapor expands your airways, which helps to clear mucus from the nasal cavity. Plus, University of Nebraska researchers found that chicken soup has an anti-inflammatory effect that may soothe a sore throat.


Too late? You're already fighting the sneezing, sniffling, aches and pains? 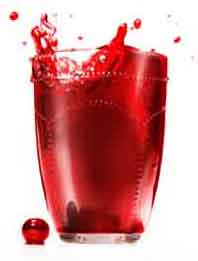 Cranberries are rich in health-boosting antioxidants, including vitamin C and flavonoids (which can act as anti-inflammatories). And fresh cranberry juice offers all its nutrient content with none of the high-fructose corn syrup and other additives found in many store-bought brands.

You can buy fresh cranberries at local markets from October through December. The berries freeze well, so you can thaw them for juicing throughout the year. Eight ounces of berries combined with a pound of red grapes (seeded or seedless; you can also substitute three to four apples for the grapes) make 16 ounces of all-natural, fortifying juice. 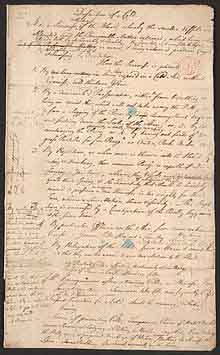 The history of the common cold goes back thousands of years. Here are some pointers from Wikipedia

The name "common cold" came into use in the 16th century, due to the similarity between its symptoms and those of exposure to cold weather. Norman Moore relates in his history of the Study of Medicine that James I continually suffered from nasal colds, which were then thought to be caused by polypi, sinus trouble, or autotoxaemia.

In the 18th century, Benjamin Franklin considered the causes and prevention of the common cold. After several years of research he concluded: "People often catch cold from one another when shut up together in small close rooms, coaches, etc. and when sitting near and conversing so as to breathe in each other's transpiration."

Although viruses had not yet been discovered, Franklin hypothesized that the common cold was passed between people through the air. He recommended exercise, bathing, and moderation in food and drink consumption to avoid the common cold. Franklin's theory on the transmission of the cold was confirmed some 150 years later.

The best prevention is staying away from people who are infected, because the overwhelming majority of infections are acquired by inhaling virus-laden air that an infected person has coughed, sneezed, or breathed out.

Additionally, experts frequently recommend thorough and regular washing of the hands, especially in healthcare environments, as this reduces the likelihood of transmission through the less common route of direct contact

In homes, schools, and workplaces, hand-washing and alcohol-based hand sanitizers reduce the number of viruses on the skin significantly, but because upper respiratory infections are primarily acquired through breathing, rather than physical contact, these are not especially effective preventive methods.

High levels of hand-washing can result in a decrease of 20% or less in transmission of the common cold. Alcohol-based hand sanitizers provide very little protection against upper respiratory infections, especially among children.

Because the common cold is caused by a virus instead of a bacterium, anti-bacterial soaps are no better than regular soap for removing the virus from skin or other surfaces. Not touching the nose, eyes, or mouth with potentially contaminated fingers can also reduce transmission of the virus through direct contact.

Efforts to develop a vaccine against the common cold have been unsuccessful. Common colds are produced by a large variety of rapidly mutating viruses; successful creation of a broadly effective vaccine is highly improbable. But new information from England suggests there may be hope for a vaccine.