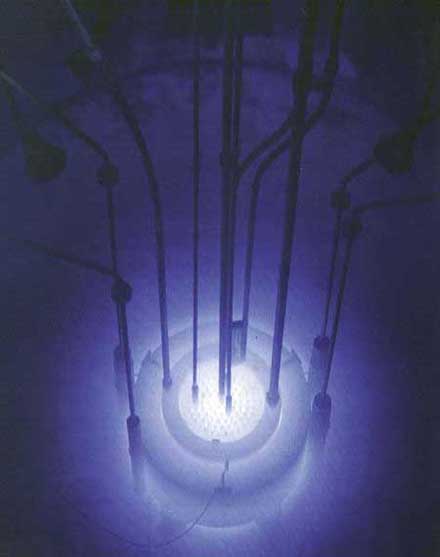 Do you ever see blue orbs or 'splashes' of glowing blue light? Do you associate it with the movement of spirit or something conscious that moves faster than the speed of light? Could you be time traveling or preparing to move through time? Do you feel an affinity for the color blue? You may be on to something. Cherenkov Radiation. If you connect, please read the article.

Cherenkov radiation is electromagnetic radiation emitted when a charged particle (such as an electron) passes through an insulator at a constant speed greater than the speed of light in that medium. The charged particles polarize the molecules of that medium, which then turn back rapidly to their ground state, emitting prompt radiation. The characteristic blue glow of nuclear reactors is due to Cherenkov radiation. It is named after Russian scientist Pavel Alekseyevich Cherenkov, the 1958 Nobel Prize winner who was the first to characterize it rigorously.


My consciousness exists only partly in this frequency of sound, light and color, but mostly in the color navy. We are time traveling (free falling through the grids) and all is accelerating, like hitting the gas pedal. Pause ... Focus ... How far down is your foot pressing the gas pedal now? We are about to catch up to something (Zero Point) and when we do, all will cease to exit as we will return to light and pure energy ... beyond the blue. It will all end suddenly 'out of the blue' - the Aquarius Factor.

(Best viewed in a dark room)

In the first photo ... the door was not in that room.

Cover the left side of my face on your screen to see another side of Ellie.