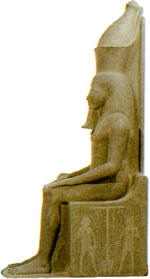 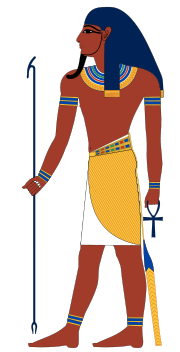 Atum (alternatively spelled Tem, Temu, Tum, and Atem) is an important deity in Egyptian mythology, whose cult centred on the city of Heliopolis. His name is thought to be derived from the word 'tem' which means to complete or finish. Thus he has been interpreted as being the 'complete one' and also the finisher of the world, which he returns to watery chaos at the end of the creative cycle. As creator he was seen as the underlying substance of the world, the deities and all things being made of his flesh or alternatively being his ka.

Atum is one of the most important and frequently mentioned deities from earliest times, as evidenced by his prominence in the Pyramid Texts, where he is portrayed as both a creator and father to the king. He is usually depicted as a man wearing either the royal head-cloth or the dual white and red crown of Upper Egypt, and Lower Egypt, reinforcing his connection with kingship. Sometimes he also is shown as a serpent, the form which he returns to at the end of the creative cycle and also occasionally as a mongoose, lion, bull, lizard, or ape.

Iusaaset, the Grandmother of Deities

Another belief held that Shu and Tefnut were created by Atum having sexual intercourse with a goddess, referred to as Iusaaset (also spelt Juesaes, Ausaas, Iusas, and Jusas, and in Greek as Saosis), meaning the great one who comes forth. She was described as his shadow or his hand. Consequently, Iusaaset was seen as the mother and grandmother of the gods. The strength, hardiness, medical properties, and edibility, led the acacia tree to be considered the tree of life, and thus the oldest, which was situated close to, and north of, Heliopolis, was said to be the birthplace of the deities. Thus, as the mother and grandmother, of the deities, Iusaaset was said to own this tree.

In the Old Kingdom the Egyptians believed that Atum lifted the dead king's soul from his pyramid to the starry heavens. By the time of the New Kingdom, the Atum mythos, merged in the Egyptian pantheon with that of Ra, who was also the creator and a solar deity, their two identities were joined into Atum-Ra. But as Ra was the whole sun, and Atum became to be seen as the sun when it sets (depicted as an old man leaning on his staff), while Khepera was seen as the sun when it was rising.

Auf (Efu Ra) was an aspect of the sun god Re Auf was a ram-headed god who wore the solar disc and traveled at night through the Underworld waterways in order to reach the east in time for the new day; however, he still had to fight off the creatures of the Underworld. Demons and gods towed his boat along while Auf stood in a deck-house, over which was coiled the serpent Mehen who warded off the dangerous Apep. The boat of night was crewed by the gods Hu, Saa and Wepwawet.