Tefnut (Tefenet, Tefnet) was the lunar goddess of moisture, humidity and water who was also a solar goddess connected with the sun and dryness (more specifically, the absence of moisture). She was the daughter of the creator god, mother of the twin sky and the earth deities and the 'Eye of Ra' as well as a creative force as the 'Tongue of Ptah'. Her name itself is related to water - tf is the root of the words for 'spit' and 'moist'. Her name translates to something like 'She of Moisture'.

Related to moisture, she was also linked to the moon, as were other deities of moisture and wetness. She was originally thought to be the Lunar Eye of Ra and thus linked to the night sky as well as to dew, rain and mist.

As with other water deities, she took on some form of a goddess of creation. As the 'Tongue of Ptah', she was one of the gods in Mennefer (Hikuptah, Memphis) who helped Ptah - that city's main god - with creation by carrying out his will. Yet in the cities of Iunu (On, Heliopolis) and Waset (Thebes) she was more of a female form of her husband-brother Shu, whose main task was to start the sexual, creative cycle and give birth to Shu's children.

Atem is he who masturbated in Iunu. He took his phallus in his grasp that he might create orgasm by means of it, and so were born the twins Shu and Tefnut.


Tefnut and Shu - god of dry air - were the children of Atem (a form of the sun god Ra), who in turn created the twins Nut and Geb. Originally, though, rather than being paired with Shu, she had been paired with a god called Tefen. Other than his name, little is known about this Tefen. It seems, though, that he and Tefnut were linked together in connection with the goddess Ma'at:

"Tefen and Tefnut have weighed Unas and Ma'at has listened, and Shu has born witness."


During the Middle Kingdom Tefnut became connected to Ma'at, and as such this goddess is sometimes seen assisting Shu in his task of holding Nut above Geb. More often he is alone in the task.

- The Gods of the Egyptians, E. A. Wallis Budge


One story says that Shu and Tefnut went to explore the waters of Nun. After some time, Ra believed that they were lost, and sent the his Eye out into the chaos to find them. When his children were returned to him, Ra wept, and his tears were believed to have turned into the first humans.

Not only was the sun god her father, but she also took on the aspect of the sun - no longer the moon - as the 'Eye of Ra', the 'Lady of the Flame' and the 'Uraeus on the Head of all the Gods': 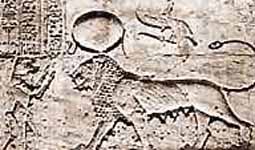 Tefnut was thought to have been the upset goddess who fled into Nubia, taking all of her water and moisture with her. Egypt soon dried, and the land was in chaos while in Nubia, Tefnut turned herself into a lioness and went on a killing spree in her anger at her father, from whom she had fled. Eventually Ra decided that he missed her, and wanted her back. Ra sent Thoth and Shu to get her, and they found her in Begum. Thoth began at once to try and persuade her to return to Egypt. In the end Tefnut (with Shu and Thoth leading her) made a triumphant entry back into Egypt, accompanied by a host of Nubian musicians, dancers and baboons. She went from city to city, bringing back moisture and water (the inundation), amid great rejoicing, until finally she was reunited with her father, and restored to her rightful position as his Eye.

This story also explains how the goddess of moisture could also be the goddess of dryness, heat and the negative aspects of the sun. The people believed that without her water, Egypt could dry and burn in the sun. So she took on the form of a lion - as did the other goddesses with the 'Eye of Ra' title - and was also strongly linked to the sun.

As the 'Eye of Ra' she was also linked to Bast, Sekhmet, Hathor, Isis, Wadjet and Nekhbet. This story is very similar to another tale of the 'Eye of Ra', where Sekhmet slaughters mankind before getting drunk, returning to heaven and turning into the sweet goddess Hathor.

At Iunet (Dendera) there was a portion of the city named after her - "The House of Tefnut" . She was worshiped in connection with the Ennead at Iunu, and in her lion form at Nay-ta-hut (Leontopolis).

ĘDespite Akenaten's distaste for the gods of Egypt, he and Nefertiti used Tefnut and Shu for political purposes. They depicted themselves as the twin gods in an apparent attempt to elevate their status to that of being a living god and goddess, the son and daughter of the creator, on earth. Akenaten was not a monotheist - despite raising the Aten above all other gods, and attempting to quash the worship of some other deities, Akenaten did not drop all links with other deities. Ra, Shu, Tefnut, Thoth, Ptah and Hathor were still prominent gods in Akenaten's religion.

Tefnut was both the Left (moon) and the Right (sun) Eyes of Ra, representing both heavenly sources of light that the ancient Egyptians saw, and thus she was a goddess of both the sun and dryness, and the moon and moisture. She was one of the original deities - one of the Ennead - in the various versions of creation, and she was the first mother, according to these stories. Even though she was not as popular as her daughter Nut, or her granddaughters Nephthys or Isis, the Egyptians knew that without her, Egypt would descend into chaos. It is no wonder that they equated her with the goddess Ma'at.