Shu (Su) was the god of dry air, wind and the atmosphere. He was also related to the sun, possibly as an aspect of sunlight. He was the son of the creator god, father of the twin sky and the earth deities and the one who held the sky off of the earth. He was one of the gods who protected Ra on his journey through the underworld, using magic spells to ward off Ra's enemy, the snake-demon Apep. As with other protector gods, he had a darker side - he was also a god of punishment in the land of the dead, leading executioners and torturers to kill off the corrupt souls. His name might be derived from the word for dryness - shu, the root of words such as 'dry', 'parched', 'withered', 'sunlight' and 'empty'. His name could also mean 'He who Rises Up'. 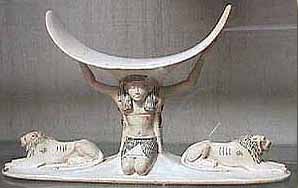 He was generally depicted as a man wearing an ostrich feather headdress, holding a sceptre and the ankh sign of life. Sometimes he is shown wearing the sun disk on his head, linking him to the sun. Occasionally, when shown with his sister-wife Tefnut, he is shown in lion form and the two were known as the "twin lion gods". At other times, he was shown with the hind part of a lion as his headdress, linking him to his leonine form. Mostly, he was shown with his arms raised, holding up the goddess Nut as the sky, standing on the body of Geb. One story says that Shu and Tefnut went to explore the waters of Nun. After some time, Ra believed that they were lost, and sent the his Eye out into the chaos to find them. When his children were returned to him, Ra wept, and his tears were believed to have turned into the first humans. Shu was created by asexually or by spitting, the first born of the sun god. He seems to be more of a personification of the atmosphere rather than an actual god. 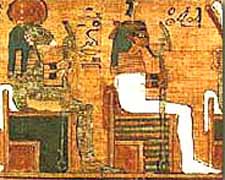 That is my daughter, the living female one, Tefnut,
who shall be with her brother Shu.
Life is his name, Order is her name.
[At first] I lived with my two children, my little ones,
the one before me, the other behind me.
Life reposed with my daughter Order,
the one within me, the other without me.
I rose over them, but their arms were around me.

As a god of the wind, the people invoked him to give good wind to the sails of the boats. It was he who was the personification of the cold northern winds; he was the breath of life - the vital principle of all living things. His bones were thought to be clouds. He was also called to 'lift up' the spirits of the dead so that they might rise up to the heavens, known as the 'light land', reached by means of a giant 'ladder' that Shu was thought to hold up.

...Shu, the 'space', the light cavity in the midst of the primordial darkness. Shu is both light and air, and as the offspring of god he is manifest life. As light he separates the earth from the sky and as air he upholds the sky vault. 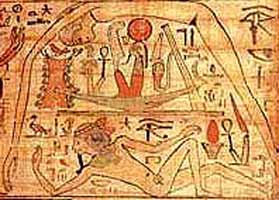 Despite being a god of sunlight, Shu was not considered to be a solar deity. He was, though, connected to the sun god as one who was thought to bring Ra (and the pharaoh) to life each morning, raising the sun into the sky. During his travels through the underworld, he protected Ra from the snake-demon Apep, with spells to counteract the serpent and his followers. He participated in the judgement of the deceased in the Halls of Ma'ati as the leader of aggressive, punishing beings who were to eliminate the ones not worthy of the afterlife.

The chapter of not perishing and of being alive in Khert-neter: Saith Osiris Ani: "Hail, children of: Shu! Hail, children of Shu, children of the place of the dawn, who as the children of light have gained possession of his crown. May I rise up and may I fare forth like Osiris."

The Book of the Dead, Chapters XLVI and XL

Shu hath raised thee up, O Beautiful Face, thou governor of eternity. Thou hast thine eye, O scribe Nebseni, lord of fealty, and it is beautiful. Thy right eye is like the Sektet Boat, thy left eye is like the Atet Boat. Thine eyebrows are fair to see in the presence of the Company of the Gods.

The Speech of Anubis (from the Papyrus of Nebseni)

The Egyptians believed that Shu was the second divine pharaoh, ruling after Ra. Apep's followers, though, plotted against him and attacked the god at his palace in At Nub. Despite defeating them, Shu became diseased due to their corruption, and soon even Shu's own followers revolted against him. Shu then abdicated the throne, allowing his son Geb to rule, and Shu himself returned to the skies.


There are no known temples to Shu, but despite Akenaten's distaste for the gods of Egypt, he and Nefertiti used Tefnut and Shu for political purposes. They depicted themselves as the twin gods in an apparent attempt to elevate their status to that of being a living god and goddess, the son and daughter of the creator, on earth. Akenaten, not the monotheist that most believe him to be, put out the belief that Shu lived in the sun disk. At Iunet (Dendera), though, there was a part of the city known as "The House of Shu" and at Djeba (Utes-Hor, Behde, Edfu) there was a place known as "The Seat of Shu". He was worshiped in connection with the Ennead at Iunu, and in his lion form at Nay-ta-hut (Leontopolis).Ę 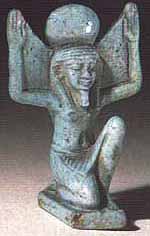 His links with Onuris are probably because the two gods had wives who took the form of a lioness (Mehit was the wife of Onuris), and both gods were thought to have brought their consorts back from Nubia. In Shu's case, when Tefnut went off in anger to Nubia, Ra sent both him and Thoth to get her, and they found her in Begum. Thoth began at once to try and persuade her to return to Egypt. In the end Tefnut (with Shu and Thoth leading her) made a triumphant entry back into Egypt, accompanied by a host of Nubian musicians, dancers and baboons.

Egypt's second divine ruler, Shu was one of the great Ennead. A god of the wind, the atmosphere, the space between the sky and the earth, Shu was the division between day and night, the underworld and the living world. He was a god related to living, allowing life to flourish in Egypt with his breath of life. He was the bridge between life and death, both a protector and a punisher in the afterlife. To the Egyptians, if there was no Shu, there would be no life - Egypt existed thanks to Shu.