Neb Tetet (Banebdjedet, Baneb Djedet, Banaded) was a Ram god whose name means 'ba (or 'soul') lord of Mendes', his cult centered in the north-east Delta.

When the two gods Horus and Set were making the heavens ring with their wranglings over precedent, it was the ram-god Ba Neb Tetet who sensibly suggested to the gods in council that they should write a letter to the goddess Neith and ask for her opinion.

His suggestion opened the way for discussion and arbitration which finally settled the dispute. His character, one of peace and level-headedness, has been sadly perverted in sensational 'occult' fiction, for Ba Neb Tetet is the benign original for a travesty called the 'goat of Mendes', who is supposed to be some sort of diabolic spirit. At Mendes was kept a sacred ram, worshipped as the incarnation of Ra and Osiris.

Originally a local god, Ba Neb Tetet was given the solar disc and uraeus (coiled cobra) and brought into the main-stream of religious life. 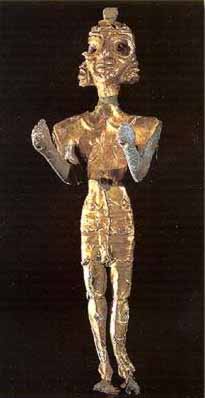 
The storm god, Baal, was a West Semitic import to Egypt. Late Bronze Age texts discovered at Ras Shamra (ancient Ugarit) on the Levantine coast, from which his cult spread, indicate that by 1400 BC, Baal had displaced the god El to become the most important god in the local pantheon.

However, the meaning of Baal is "owner" or "lord" and in the earliest of times it is questionable whether the word was used as a title for important local gods in general, or as a proper name to a specific god. Particularly at first, this name was probably given to completely different gods. Over time, the term seems to have been applied to agricultural gods in a variety of locations. There is a great confusion amongst scholars concerning the these deities called "Baal", or sometimes Bel, and their natures and origins. In fact, this god's survival through a vast period of time provides us with a complex trail marked by considerable theological difficulties.

Of the many "Baals" we find referenced, perhaps the most important, or at least the one most associated with Egypt, is the god who dwelt on Mount Sapan (hence Baal-Zaphon) in Northern Syria, and it should be noted that the following discussion relates to him more specifically then to some of his other identities. The equivalent of the Amorite deity Adad, or Hadad, he was a centrally important deity of the Canaanites. He was considered the son of a less well attested god named Dagan (others have identified him as the son of El), who was himself a god of agriculture and storms. Baal was the source of the winter rain storms, spring mist and summer dew which nourished the crops. However, Baal also became associated with the deity of other sites such as Baal Hazor in Palestine, Baal-Sidon and Baal of Tyre (Melkart) in Lebanon.

Baal was known to be a rider of clouds, most active during storms but was also considered to be a "lord of heaven and earth", even controlling earth's fertility. He was the god of thunderstorms, the most vigorous and aggressive of the gods and the one on whom mortals most depended. Some of his other common epithets include " Most High Prince/Master", " Conqueror of Warriors", Mightiest, Most High, Supreme, Powerful, Puissant", " Warrior", and " Prince, Master of the Earth". He is also sometimes called Re'ammin, meanign "Thunderer", as well as Aleyin, meaning "Most High", Mightiest", "Most Powerful", or Supreme and he has many, many other epithets. 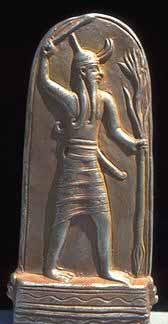 Armed with magical weapons made by the craftsman god, Kothar, Baal manages to overcome Yam, who was the tyrannical god of the sea, according to the surviving ancient Near Eastern myths. However, in another story, with the assistance Anat, Ball gets El's approval to build a house. It is Kothar who actually builds the house, and afterwards, Baal celebrates by inviting the gods to a feast. Ball himself was eventually overcome by Mot, a personification of death, after which he descended into the underworld. He then returned to life with the help of his sister and consort, Anat, in a tradition not unlike the death and resurrection of Osiris.

Baal was usually shown in anthropomorphic form depicted as a powerful warrior with long hair and a full, slightly curved, pointed Syrian style beard. He would wear a conical helmet much like a funnel with two horns attached at its base. He is often represented with a straight-bladed sword that he wore on the belt of a short kilt. At other times, he was shown holding a cedar tree club or spear in his left hand while his raised right hand welding a weapon or even a thunderbolt. This theme, which is common to many Near Eastern storm gods, may have inspired the iconography of the Greek god Zeus.

Baal's cult animal was the bull, which symbolized his power and fertility, though at times and in different places he was also associated with goats and even flies. He is sometimes shown in Near Eastern art standing on the back of a bull, and certainly this association would have also contributed to his acceptance by the Pharaohs of Egypt, where bull cults particularly in the New Kingdom were an important aspect of the ancient theology.

Baal's cult animal was the bull, which symbolized his power and fertility, though at times and in different places he was also associated with goats and even flies. He is sometimes shown in Near Eastern art standing on the back of a bull, and certainly this association would have also contributed to his acceptance by the Pharaohs of Egypt, where bull cults particularly in the New Kingdom were an important aspect of the ancient theology.