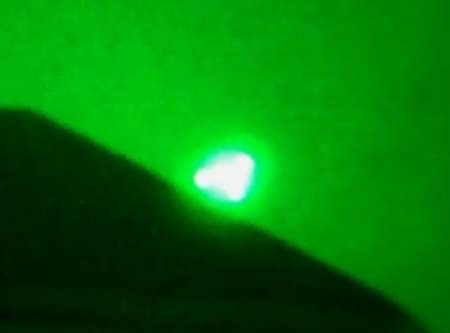 I know people who have witnessed UFO activity in space for years using night vision glasses or cameras. Friends have seen UFOs perform maneuvers that cannot be explained - at least not to the public. Ships split off in formation, zig zag, travel beyond he speed of craft we have, disappear, and more. You just can't make this up if you witness it.

Some of what is reported may be influenced by the media, TV, film, etc. but much of it, especially the oldest reports, are valid. Today technology is honing in on what it labels "Invisible UFOs" as the program closes and undeniable proof of our connection with alien creators is revealed to all.

Some people report telepathic communication with the ships or entities within, but that is all subjective. What is most interesting is someone receiving a telepathic message that a ship is out there - taking their Night Vision Glass outside and the ship is at the exact degree they were told to look. FYI - All of the love and light memos from ETs have been deleted.

At the end of the day - this is all fun and/or busy work to me until a physical ship lands, entities come out and explain what is going on. The rest is history.

Are the ships ours, theirs, illusion or al of the above? You decide.


'Invisible UFOs' Fill the Skies   Live Science - July 18, 2012
"Why are all the good UFOs invisible?" one Gather.com user asked in response to the latest "invisible UFO" report posted to the site.

You might have thought a defining characteristic of a UFO would be visibility. But thanks to zealous alien hunters doggedly scanning the sky with night-vision cameras, a new class of flying objects that only emit infrared light has emerged from the darkness. Are they spies from the great beyond?

"Some people claim to see actual battles between UFOs up in the sky, using night-vision equipment," the ufologist Robert Sheaffer told Life's Little Mysteries. "Those devices magnify faint objects so much that the sky seems to be filled with invisible UFOs. In reality, of course, they are seeing owls, bats, moths, airplanes, satellites, etc." Night-vision optics trade low resolution for high sensitivity, he explained, so that points of light (such as distant satellites) spill out into circles that make the objects appear huge.

However, some of the invisible UFOs out there really are spies of a sort - or whatever else you choose to call military drones.

Consider, for example, an invisible triangle UFO recently caught on camera by the Laredo Paranormal Research Society, a Texas group. In their footage, captured using an infrared-sensitive third-generation night-vision camera and posted to YouTube July 13, an object composed of three evenly spaced glowing orbs streaked southward across the field of view and disappeared behind the roof of a house.

According to LPRS founder Ismael Cuellar, the "infrared-cloaked" object could not be seen with the naked eye, and cruised silently. "We have ruled out birds, bugs, airplanes, helicopters, and even flying drones by comparing them side by side as a point of reference," Cuellar told Life's Little Mysteries. This seems to leave just one explanation: It's a cloaked alien spaceship.

Not so, according to Ben McGee, a geoscientist, aerospace consultant, UFO skeptic and lead field researcher on the National Geographic series "Chasing UFOs." In McGee's opinion, all the signs point to this object being a border patrol drone with infrared anti-collision or identification lights. Here's why he thinks so.

"Nearly one-third of traffic through the nearby Laredo International Airport has historically been military in nature. Laredo is very near to the Mexican border. The military is increasingly using drones to assist with border security, which are small, quiet, and dim (to the naked eye) aircraft," McGee wrote in an email, adding that most drones are also triangular. UFO Sightings Are 3,615 Times More Common than Voter Fraud

This alleged drone oversaturated the camera's infrared sensor. Why? "Particularly with unmanned aerial vehicles (UAV), anticollision systems are of the utmost importance," he wrote. "One custom UAV lighting manufacturer recently announced custom infrared navigation lights for a major UAV defense contractor. Using these lights in 'constant-on' infrared mode would make the tail, belly, and wingtips extraordinarily bright in infrared, washing out the shape of the aircraft in-between." And that description pretty closely matches the case.

"In short," McGee said, "high-intensity/close-range infrared lights interacting with a sensitive infrared camera is the problem - turning an aircraft into a triangular blob - rather than the infrared camera being the solution to revealing invisible triangles or pyramids zooming about our airspace."