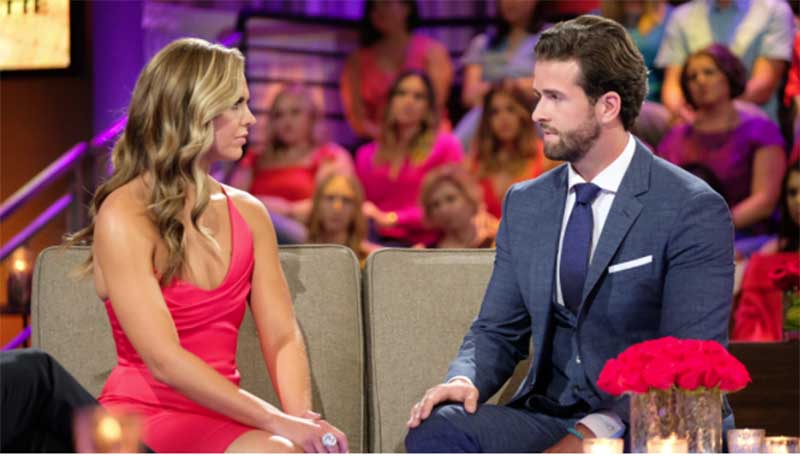 I rarely watch reality TV - though sometimes I program the season finale of a show because of all the hype. I especially don't like obvious staged reality shows produced to elicit emotions from those who watch them. I realize the purpose of bringing people's issues and poor behavior to the fore is to help those watching find these emotional experiences relatable and will perhaps help them heal. Reality is always about abuse and healing - lies and conspiracies - and how we realize truth. Are we being played by whomever or whatever created this reality? That is probably the case with the excuse of studying emotions.

From the expression "what goes around comes around" - the man she thought was the right one turned out to be a 25-year-old good-looking cheater named Jed who seized the opportunity to appear on the show to promote his musical career all the while having a girlfriend.

When Hannah found out the truth she ended it with him returning the stunning engagement ring. One has to wonder where Jed got the money to pay for it as his career as a musician was not taking off. Payments I suppose ... OK she returned the ring but if he was rich she should've kept it. Remember Mariah Carey and the alleged $10 million engagement ring she got from Australian billionaire James Packer? Diamonds are a girl's best friend... as the song goes.

In situations like this I wonder what I would have said to Hannah if she was a client. No question about it. I would have laid the truth on her that a 25-year-old handsome musician is not marriage material and that the likelihood of him being monogamous was zero. Would she have listened and believe me? Sometimes, the heart wants what the heart wants.

In an extra twist Tyler, the guy Hannah dumped to be with Jed, returned to the show, Hannah expressed feelings for him, and they decided to meet again in the future.

So Hannah, who is also young, not ready for marriage, and has not found the right partner, would have cheated on Jed and I would have told her so.

And this my dear readers is why relationships in America often don't work! Young and "shallow". Maybe Lady Gaga should write a song about this. Shallow