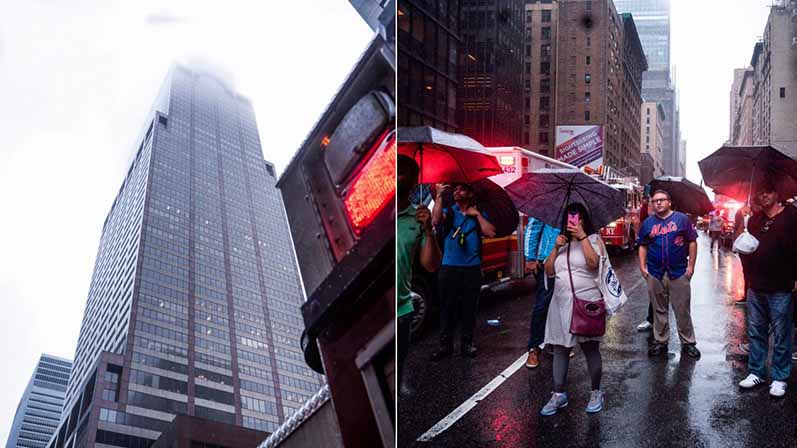 It was a rainy foggy day in the city as another severe storm caused by climate change swept across the northeast having caused havoc across the country over the weekend.

Not far from Rockefeller Center, where hours before we had celebrated the 73rd Tony Awards, a helicopter had crash-landed on the roof of a skyscraper - sparking a fire, killing the pilot, Tim McCormack, as people, feeling the building shake, but not knowing what was going on, were evacuated, squeezing into stairwells, hurrying down flight after flight to get out. We can all visualize the events after having seen the news or experienced a similar situation somewhere in time.

It's the "not knowing" that causes fear, panic and anxiety. New York City high-rise buildings always have evacuation drills so people know what to do, but when tragedy hits and panic mode takes over you never know how you or anyone else will react. On this day the stairwells were overcrowded as people poured in from all floors. Luckily it was not hot which would have further complicated the evacuation. As far as I have read or seen, no one was injured, most people helping others to safety.

Do you know that regulating body temperature and the atmosphere around you is more important than other things we do to control our physical and emotional health - diet. exercise, sleep, stress, etc. I function best in cold weather and keep my home and car at 68 degrees often using AC when others don't.

The outcome Monday would have been far worse had the weather been sunny, hot, and humid - a typical June day in the city. For those who suffer from depression, panic, fear, and anxiety, Monday's events would have been exasperated by climate.

So where does one's mind go when a plane hits their building and they have to evacuate? Without skipping a beat - for most New Yorkers -> to the events of 9/11.

As I write this I'm remembering the lightning bolt that struck the roof of my building on June 19. 2018. I heard the crash as it hit the lightning rod just above me. Then I saw the flash of lightning through the skylight in my apartment. I didn't panic or feel the least bit threatened not knowing what was going on. I love lightning and feel connected to it often watching summer storms from my apartment.

The building in Monday's incident is not far from Trump Tower so why was the helicopter flying over restricted airspace? No one has suggested that someone was going after Trump Tower and missed but is is an omen?

Investigations continue on all fronts.

With increased insanity in the form of terrorist acts and mass shootings across the world, we are always on our guard often bracing for the next big event. No one is immune from violence, extreme climate changes, and natural disasters such as earthquakes. These are increasing global patterns and part of end times whether you believe in them or not.

My daughter Zsia called in the evening to remind me that at the start of her career at EY (Ernst and Young) she worked in that building for four years. Her son, Michael starting an internship in technology and business there last week before going to Boston for the remaining two month.

When the helicopter tried to land on the roof of the building, I was home with the TV off on a conference call with a producer name Elaine, at VICE TV, about shooting a segment for a yet unnamed series they are pitching about the negative effects of social media on business.

I'm not sure why they chose me, perhaps others having declined, but I turned down the offer as I try to stay away from controversial topics that incite the craziness that permeates the world today. These types of shows take snippets of what guests say out of context. I've been around too long for anything like that.

I remain a teacher not someone who is part of the insanity of the social media world. I'm enjoying YouTube as a venue as time permits and ask people to help me when they can.

What do followers of my work gravitate to?

Twitter followers want instant news and gossip. I would say most of the crazies wind up on twitter - I just realized that's a Trump reference.

Readers of Crystalinks like text files. most looking for a fast read.

In any venue I get the feeling people are waiting for me to make a statement that will change everything. Not yet ... but getting closer ... Tic tock.

I like all of the above which takes us to ...

I am reviewing thousands of Crystalinks text files, from the beginning, deleting outdated ones, repairing others, and hoping to move Crystalinks to a Wordpress platform in the months ahead. If we have to be here ... Crystalinks should keep up with the Time and Times.

It's interesting that as I review archived files from a specific year, people who were part of my life at that time call me. It is as if I am recreating them into my current reality ... though I don't like to look back ... just ahead into infinity.

Currently i am reviewing the files from 2010 - each year faster and easier as the files are cleaner and can easily be linked to newer content.

Reality is ending - linked to the fibonacci sequence - our algorithm from start to finish. Okay .. you get it. (If I only had a dollar for ever time I blogged about end times).

I started blogging about reality as a simulation around 2010 as guided by the consciousness grids. (If only had a dollar ...) I often wonder if it's important for people to understand that we're in a simulation and at the end we all get deleted. Hmmm....

Souls are here to experience closure - some programmed to understand and others not. What can possibly be worse than ignorance?

Most believe life as we know it is forever changing but will continue on indefinitely unless climate change and natural disasters take us out ... and like the helicopter story above - rotation and spin - it all crashes.

Whatever your programmed to believe ....