Close the US Southern Border 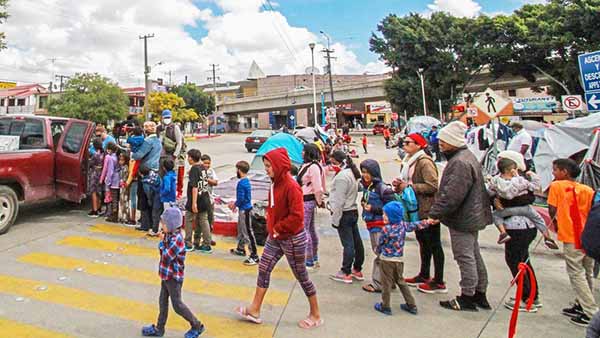 "Close the Southern Border!" are words that echoed in my head even before Trump talked about his border wall - which was never going to work.

Besieged by climate, covid and other health issues how is the United States supposed to solve the issues of migrants while we're doing such a terrible job here at home. Desperate foreigners will never stop flooding the border because they have nothing to lose ... but we do.

Challenges grow every day alongside endless bi-partisan situations in which we live - things becoming more polarized or bipolar by the day. There are no solutions because that's the algorithm of our reality.

Forget threats from China, North Korea, and other foreign adversaries. Short of cyber-warfare - our greatest threat is the US southern border where everything can go wrong and little by little it has.

Posting news articles, documentaries and more with pics of migrants coming out of Central and South American as well as Haiti - plays on human emotions especially for those programmed to save the world. We could have helped Haiti rebuild after its first major earthquake - but that was not programmed to happen for different reasons generally coming down to money. Everything is about money which is power and control.

I ask you ... can anyone save the world? Is that wishful thinking?

The world has an agenda of its own following algorithmic directives. You can pray or do other ceremonial activities you believe will change things. They won't.

Love and light and good intentions or whatever else metaphysicians propose since the 1980s will not change anything. False metaphysical philosophies about how things work and the fact that we have free will to change them is misleading as witnessed by what is unfolding in this timeline.

The migrant situation is so bad all border crossings should be closed until further notice even if it affects the economy. It's a sad situation growing worse ... now a humanitarian crisis.

Where do these people go? Who takes care of them without this turning into criminal activity as has happened in several European nations that took in migrants from countries like Syria.

Most importantly ... we are not prepared for South and Central American gangs, cartels and other criminal elements to organize and storm the border - especially as some of their members are already in the United States and can form a coalition here. This is not the plot of a film. It's a fact.

We live in a fantasy about life taking care of itself but not anymore.

We think of ourselves as a country with an open door policy for those in need especially as we reflect back on our own ancestry. That was then this is a different reality where everything features the words, "It's complicated." Indeed it is as we witness those in control who could resolve so many of our issues preferring to play political games as the world falls away.

We are not prepared for what is coming which underlies most of what's wrong in this country.