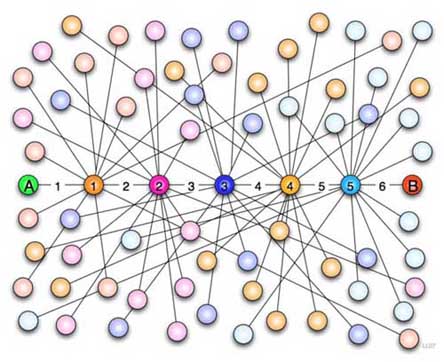 As far back as I can remember, the expression 90 Degrees of Separation has played over and over in my mind - right angles linked to the logarithmic spiral that creates the reality in which we experience and believe is all and everything. Readers of this blog know better. We are on the verge of expanding into so much more. Sit tight .. we will soon be there.

I blogged about 90 Degrees of Separation in the 1990's then updated the blog in 2007. It has to do with the movement of light and geometric patterns (all is math and projected illusion) in and out of our frequency of perception - bending light, optics, refraction, invisibility, consciousness, etc. It all comes down to what is visibly real at any given level of consciousness and what is out there that we cannot see that is now merging with the frequency in which we experience. We see just so much with our physical brains, occasionally getting a glimpse of projected illusion in another space-time or time-space.

Let's go to 6 degrees of Separation... Chain-Link, mentioned below, is a metaphor for human DNA.

Six Degrees of Separation, also referred to as the "Human Web", refers to the idea that everyone is at most six steps away from any other person on Earth, so that a chain of, "a friend of a friend" statements can be made to connect any two people in six steps or less. It was originally set out by Frigyes Karinthy and popularized by a play written by John Guare.

Statist theories on optimal design of cities, city traffic flows, neighborhoods and demographics were in vogue after World War I. These conjectures were expanded in 1929 by Hungarian author Frigyes Karinthy, who published a volume of short stories titled Everything is Different. One of these pieces was titled "Chains," or "Chain-Links."

The story investigated in abstract, conceptual, and fictional terms many of the problems that would captivate future generations of mathematicians, sociologists, and physicists within the field of network theory. Due to technological advances in communications and travel, friendship networks could grow larger and span greater distances. In particular, Karinthy believed that the modern world was 'shrinking' due to this ever-increasing connectedness of human beings. He posited that despite great physical distances between the globe's individuals, the growing density of human networks made the actual social distance far smaller. As a result of this hypothesis, Karinthy's characters believed that any two individuals could be connected through at most five acquaintances. In his story, the characters create a game out of this notion.

This idea both directly and indirectly influenced a great deal of early thought on social networks. Karinthy has been regarded by some as the originator of the notion of six degrees of separation.

The small world experiment comprised several experiments conducted by Stanley Milgram examining the average path length for social networks of people in the United States. The research was groundbreaking in that it suggested that human society is a small world type network characterized by short path lengths. The experiments are often associated with the phrase "six degrees of separation".