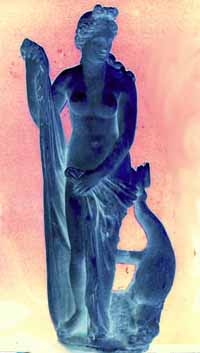 In Greek mythology, Aphrodite was the goddess of love (equivalent to the Roman Venus, Egyptian Goddess Isis, the Phoenician Astarte and the Babylonian Ishtar).

She is known as the Daughter of Heaven and Sea, the child of Uranus and Gaia.

Her story tells of fertility, love and pleasure.

Venus is the goddess of Love and Beauty. She along with her son Cupid (Eros) became a metaphor for sexual love.

Venus represents the feminine aspect in all of us. She is the creational Earth Mother.

Often seen as the bright, silvery morning or evening star, and is the brightest object in the sky after the sun and the moon.

She is said to be either a daughter of Zeus or to have sprung from the foam of the sea.

There are two version of her birth.

In the first version - Hesiod, she was older than Olympians. When the Titan Cronus severed his father's (Uranus) genitals and flung into the sea, the blood and semen caused foams to gathered and floated across the sea to the island of Cyprus. There Aphrodite rose out of the sea from the foam (hence her name came from the word aphros, which means foams). She had experienced no infancy or childhood. She was grown, young woman. The Clam Shell version.

In the second version by Homer, she was known as the daughter of Zeus and the Oceanid Dione. The Cherubs Version.

She was married to Hephaestus (Vulcan) but had numerous affairs with gods and mortals, the most notorious of these, the goddess' long affair with Ares (Mars) god of war. She was the mother of Eros (Cupid), Deimus (Fear), Phobus (Panic) and Harmonia, wife of Cadmus.

One of her mortal son, was Aeneas, by her lover was Anchises, king of Dardania. Anchises was crippled by thunderbolt from Zeus, when he revealed that he made love to the goddess.

She supported the Trojans during the war, not only because Paris awarded the apple to her as the fairest, but that Aeneas also fought with the Trojans. She tried to rescue her son, when Diomedes wounded him. Diomedes also wounded her and drove her off the battlefield. 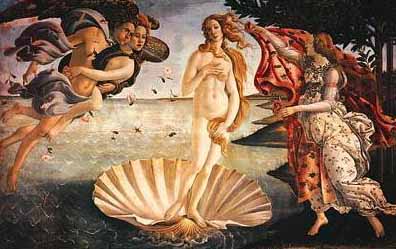 Her favorite haunts were Cyprus and Cythera. Aphrodite favorite animals were the dove, sparrow, swallow, swan and turtle.

She was the unfaithful wife of Hephaestus, the god of fire, and the mother of Eros. Aphrodite surpassed all the other goddesses in beauty, and hence received the prize of beauty from Paris. She likewise had the power of granting beauty and invincible charm to others.

In the vegetable kingdom the myrtle, rose, apple, and poppy, among others, were sacred to Aphrodite, as,in the animal world, were the sparrow, dove, swan, and swallow.

Venus married and bore children but did not stay focused on her home affairs. In fact, she concentrated almost completely on her extramarital affairs. Her many lovers include Aries, the God of War, and the handsome Adonis.

The goddess loved to pamper herself and cultivate her beauty. Her symbol represents the hand-held vanity mirror that Venus used to admire her beauty. Truly, Venus has become the symbol for feminity itself. 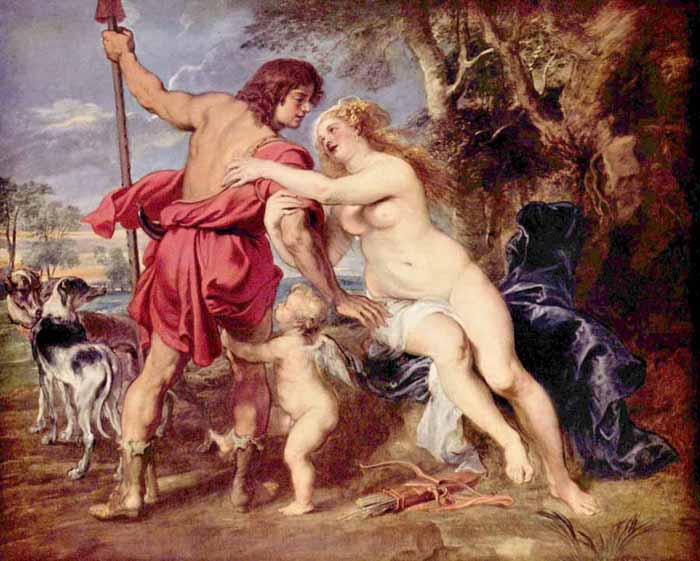 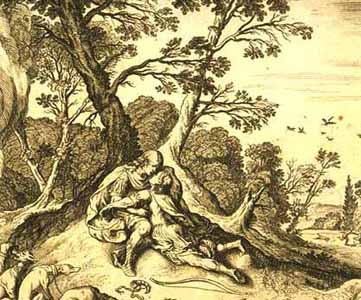 Venus - Aphrodite - playing one day with her boy Cupid (Eros), wounded her bosom with one of his arrows. She pushed him away, but the wound was deeper than she thought.

Before it healed she beheld Adonis, and was captivated with him. She no longer took any interest in her favourite resorts - Paphos, and Cnidos, and Amathos, rich in metals.

She absented herself even from heaven, for Adonis was dearer to her than heaven. Him she followed and bore him company. She who used to love to recline in the shade, with no care but to cultivate her charms, now rambles through the woods and over the hills, dressed like the huntress Diana; and calls her dogs, and chases hares and stags, or other game that it is safe to hunt, but keeps clear of the wolves and bears, reeking with the slaughter of the herd.

She charged Adonis, too, to beware of such dangerous animals. "Be brave towards the timid," said she; "courage against the courageous is not safe. Beware how you expose yourself to danger and put my happiness to risk. Attack not the beasts that Nature has armed with weapons. I do not value your glory so high as to consent to purchase it by such exposure. Your youth, and the beauty that charms Venus, will not touch the hearts of lions and bristly boars. Think of their terrible claws and prodigious strength! I hate the whole race of them. Do you ask me why?"

Then she told him the story of Atalanta and Hippomenes, who were changed into lions for their ingratitude to her.

Having given him this warning, she mounted her chariot drawn by swans, and drove away through the air. But Adonis was too noble to heed such counsels.

The dogs had roused a wild boar from his lair, and the youth threw his spear and wounded the animal with sidelong stroke.The beast drew out the weapon with his jaws, and rushed after Adonis, who turned and ran; but the boar overtook him, and buried his tusks in his side, and stretched him dying upon the plain.

Venus, in her swan-drawn chariot, had not yet reached Cyprus, when she heard coming up through mid-air the groans of her beloved, and turned her white-winged coursers back to Earth.

As she drew near and saw from on high his lifeless body bathed in blood, she alighted and, bending over it, beat her breast and tore her hair.

Reproaching the Fates, she said, "Yet theirs shall be but a partial triumph; memorials of my grief shall endure, and the spectacle of your death, my Adonis, and of my lamentation shall be annually renewed.

Your blood shall be changed into a flower; that consolation none can envy me."

Thus speaking, she sprinkled nectar on the blood; and as they mingled, bubbles rose as in a pool on which raindrops fall, and in an hour's time there sprang up a flower of bloody hue like that of the pomegranate.

But it is short-lived. It is said the wind blows the blossoms open, and afterwards blows the petals away; so it is called Anemone, or Wind Flower, from the cause which assists equally in its production and its decay. Milton alludes to the story of Venus and Adonis in his "Comus:

"Beds of hyacinth and roses
Where young Adonis oft reposes,
Waxing well of his deep wound
In slumber soft, and on the ground
Sadly sits th' Assyrian queen;" etc. 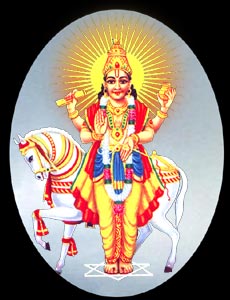 The planet Venus is known as SUKRA in Vedic astrology. Sukra means "white", or "bright" in Sanskrit.

Venus is a first rate benefic in Jyotish (predictions). He rules over the two sidereal signs of Taurus and Libra.

Venus is exalted in Pisces and in his fall in the opposite sign of Virgo. Venus is a karaka, or indicator of spouse, love, marriage, comfort, luxury, beauty, prosperity, happiness, all conveyances, art, dance music, acting, passion and sex, healing and the saying of mantras.

Sage Parasara says of Venus; "Venus is charming, has a splendors physique, is excellent or great in disposition, has charming eyes, is a poet, is phlegmatic and windy and has curly hair."

Venus most powerful position is in the 4th House and enjoys the TRIKONAL Houses, 1, 5, and 9. Venus is a particularly beneficial planet for Capricorn and Aquarius Ascendants. Her nature is KAPHA, or watery in disposition.

Her gem is diamond and her metal is copper and silver. Venus' direction is Southeast and her day is Friday. She reaches full maturity at age 25. In Vedic myth Venus, or Sukra, is known as the Guru, or teacher of the ASURAS, or one of the two camps of the Vedic deities. Sukra therefore is a Brahmin, or the highest priestly order, and is considered the forefather of the Brig lineage of sages from ancient India.

In Vedic myth the Asuras are the demonic aspect of the divine and, like many of the ancient creation myths, are locked in eternal battle with the Devas, the auspicious aspect of the Divine. In one episodic myth the Devas are particularly concerned in their battle with Asuras because Venus knows the mantra of immortality to raise the dead. This of course gave the Asuras an unfair advantage in their battle with the Devas. So Jupiter, or Brihaspati, the guru to the Devas, sends his son Kaca (brightness) to study under Sukra.

Sukra has a beautiful daughter Devayani (way to the gods), and she is quite taken with Kaca. Now, the Asuras know what Kaca is up to, so like all good demons they kill him. Devayani, of course, grieves for him and tells father, so Sukra repeats the mantra and Kaca comes back to life. Then the demons kill Kaca again.

Once again Devayani complains, and once again Sukra repeats the mantra and Kaca come back to life. Undeterred, the demons go about killing Kaca and Sukra keeps resurrecting him. So the demons get a particularly demonic idea and this time they kill Kaca and grind him up into a fine powder and put him in Sukra's wine. Sukra drinks the wine, Devayani begins her grieving, and in response Sukra repeats the mantra, but this time he has a stomachache as Kaca speaks from inside him. At last the demons appear to be happy.

But, they ironically bring about the very thing they were trying to prevent, for Sukra reveals the mantra of immortality to Kaca, so when Kaca tears himself out of Sukra's body he will repeat the mantra and raise Sukra from the dead. This myth explains why all Brahmins committed to spiritual life are not allowed to drink wine, and one of the epithets of Venus is: the one who "produces stomach problems".

Sukra bestows long life, wealth, happiness, children, and property and good education. He is the Guru for Asuras. Well learned in Neeti Sastras follower of such sastras and one who dispenses justice, Sukra is considered a beneficial Devata. He blesses the devotees with power to control one's Indriyas (Sense organs) and enables the devotee to obtain fame and name.

In the Zodiac, he is the Lord of Tula. Sukra takes one year to complete the Zodiac cycle living one month in each Rasi. Fridays are considered to be effective for the worship of Sukra.

Venus rules our values and sense of appreciation. When we appraise or appreciate something, whether another person or a new car, this is Venus at work. Venus describes how we love and what we want to be loved for.

Venus is a key to relationships, pleasure, art and beauty.