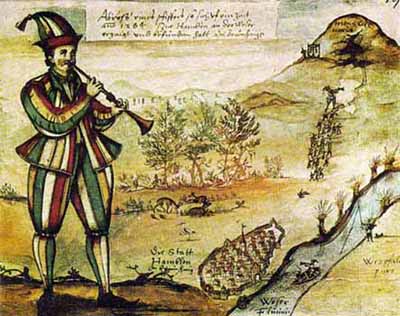 According to legend, the Pied Piper lures 130 children of Hamelin away.

The Pied Piper of Hamelin is a folk tale, among others written down by the Brothers Grimm. It tells about a disaster in the town of Hamelin, Germany, that supposedly occurred on June 26, 1284. In that year a man came to Hamelin claiming to be a rat-catcher. The people of Hamelin promised him payment for killing the rats. So the man took a pipe, attracted the rats by his music and made them follow him to the Weser river, where they all drowned. Despite this success the people reneged on their promise and did not pay the rat-catcher.

The pied piper left the town of Hamelin, after being tricked by the people. But he returned several weeks later, while the inhabitants were in the church. He played his pipe again, this time attracting the children of Hamelin. One hundred thirty boys and girls followed him out of the town, where they were lured into a cave and sealed inside. Depending on the version, at most two children survived. Continued


Metaphors in the Legend 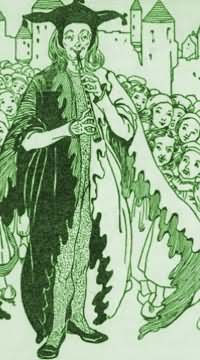 Reality is myth and metaphor brought forth in the alchemy of time and consciousness. The story of the Pied Piper is laced with metaphors, which include:

Sealed inside (lost in the frequency, consciousness - of physical reality,
unable to remember the truth about creation,
breaking the seals - sudden release from the grasp of our electromagnetic energy program)

The image of the pied piper often resembles the joker, trickster, or clown
(the duality of our nature and learning experience in physical reality)