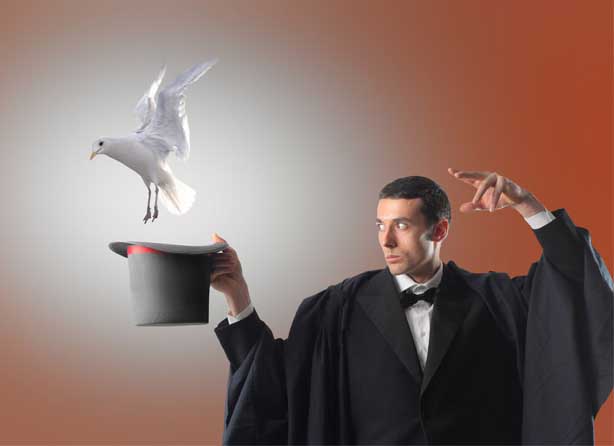 The human brain is an electrochemical machine that responds to stimuli by focusing, interpreting, and processing what it experiences based on acquired learning. Reality (nothing) is not what you believe it to be. You won't 'get it' until the hologram ends and you move consciousness to higher frequency. If you are reading this now, you are probably good to go.

Human consciousness is interesting to study, but is also very limited.

Perception and Deception; In the classic Hat-trick - a performer will produce an object (traditionally a rabbit or a bouquet of flowers) out of an apparently-empty top hat.

I have always believed that reality is magic and illusion - the game of the Trickster forever pitting negative against positive in the electromagnetic polarities of physical reality.

Metaphors and Symbols at this level of conscious awareness:

rabbit = time or Mad Hatter or most people are a bit mad;

flowers = flower of life or creation;


When any negative event happens on a global scale, such as war, I tend to see it as a distraction for something much bigger that is being kept secret from public consciousness. If anybody tries to disturb the distraction, they get 'canceled out'.

If you focus your energies on the economy and survival, you might not have time to pay attention to everything else that is collapsing on the planet.

This also applies to people dealing with small children. If they want to distract a crying baby, simply divert their attention elsewhere and they will stop crying. If you are really good at it, they will forget what they were crying about in the first place after your distraction is no longer in play. This also applies to adults.

Distraction is a very important Key to keeping the program running down here, always begging the question, "What is really going on?"


How the brain's architecture makes our view of the world unique   PhysOrg - December 6, 2010

The Ebbinghaus Illusion. Most people will see the first circle as smaller than the second one Researchers found a strong link between the surface area of the primary visual cortex and the extent to which volunteers perceived the size illusion -- the smaller the area, the more pronounced the visual illusion.


Magicians create illusions by taking advantage of how we perceive stimuli and process information. For example, a dove fluttering from a hat can be used to draw an audience's attention away from the actual trick. There is a place for magic in science. Five years ago, on a trip to Las Vegas, neuroscientists Stephen Macknik and Susana Martinez-Conde realized that a partnership was in order with a profession that has an older and more intuitive understanding of how the human brain works. Magicians, it seems, have an advantage over neuroscientists.

"Scientists have only studied cognitive illusions for a few decades. Magicians have studied them for hundreds, if not thousands, of years," Martinez-Conde told the audience during a recent presentation here at the New York Academy of Sciences.

She and Macknik, her husband, use illusions as a tool to study how the brain works. Illusions are revealing, because they separate perception from reality. Magicians take advantage of how our nervous systems - our eyes, sense of touch, minds and so on - are wired to create seemingly impossible illusions.

After their epiphany in Las Vegas, where they were preparing for a conference on consciousness, the duo, who both direct laboratories at the Barrow Neurological Institute in Arizona, teamed up with magicians to learn just how they harness the foibles of our brains. Their discoveries are detailed in their new book, "Sleight of Mind: What the Neuroscience of Magic Reveals about Our Everyday Deceptions" (Henry Holt and Company, 2010).

The psychological concepts behind illusions are generally better understood, but they treat the brain as something of a black box, without the insight into brain activity or anatomy that neuroscience can offer, they write.

Individual tricks may take advantage of any number of neurological phenomena, like our neurons' energy-saving practice of adapting to a stimulus to create the illusion that something, which a magician may have furtively moved, is still in place. Magicians may exploit our visual system's dependence on contrast to make objects appear to disappear or appear out of nowhere. Or they may divert our attention. Magicians don't limit themselves to one method at a time, and often, play multiple techniques off one another, Martinez-Conde said. "We are beginning to suspect the way this works in the brain is [that] the total is more than the sum of the parts," she said.

In particular, magicians are masterful manipulators of attention, which can be misdirected overtly, by directing the audience to look away from the location where the trick actually occurs, or covertly, by a more subtle manipulation. Cognitive scientists have also discovered means of sneaky misdirection. In a short video clip, a researcher, posing as a student on a college campus, asks a professor for directions. While the two are talking, others carrying a door walk between them, the first lost student is replaced by a second lost student, and the professor continues talking to the new person without realizing the switch.

This is the result of change blindness, Martinez-Conde explained. As long as the person who was replaced fit into the same category - both appeared to be students - it was unlikely the professor would have noticed the switch that took place during the brief interruption, she said.

Paying attention to one thing means the brain must shut out other information, also a phenomenon ripe for exploitation. In fact, a neuron activated by a stimulus will inhibit its neighbors, preventing them from sending signals related to other stimuli; this phenomenon is called lateral inhibition, Macknik said.

As a graduate student, Macknik took on the role of a magician, though he didn't think of it that way at the time, when he discovered an illusion called the Standing Wave. [See it here]

It is composed of a three flickering bars: A target bar is surrounded by two other bars, one on either side. As the three bars move closer together, the target bar becomes invisible, at least to the conscious brain.

The retina, however, continues to perceive all three. This happens because of lateral inhibtion: Neurons responding to the two outer bars suppress the signal for the target bar, effectively erasing the image of the target from the brain of the spectator. "You don't see it because the information doesn't make it to the parts of your brain that are conscious," he said in an earlier interview. "This is very similar in many ways to what magicians do with misdirection."

Only 0.1 percent of the human retina offers high-resolution vision - with about half the primate brain dedicated to processing visual information anything more would create a cumbersomely large brain - and we turn this spotlight on whatever we're focused on at the moment, according to Macknik. As the Standing Wave demonstrates, our attention spotlight allows us to be deceived.

Magicians' eyes can also be deceitful. Since humans are social individuals, and our eyes are drawn to follow others' gazes, a phenomenon known as joint attention. A magician can use joint attention to his or her advantage by looking up from a trick to meet a spectator's gaze, and so taking the spectators attention off the trick itself temporarily, Macknik said. (Macknik notes we can separate the focus of our attention from our gaze, an ability that allows us to deceive others into misinterpreting the focus of our attention.)

There are many ways magicians misdirect attention. A dove released from a hat is a distraction we can't ignore, or magicians can deceive our sense of time by separating the method from the magical effect, or they can use social cues and even comedy.

A magician has three basic techniques: optical, mechanical and psychological, according to David Kaye, a children's magician who performs as "Silly Billy," and who attended the presentation. "I think that a lot of the joy of being a magician is understanding what's going on in the brain, at least for me," he said. But Kaye noted that magicians usually stop at the psychological level, while Martinez-Conde and Macknik went deeper, into the wiring of the brain. "It's always interesting to learn more about why this works," he said.