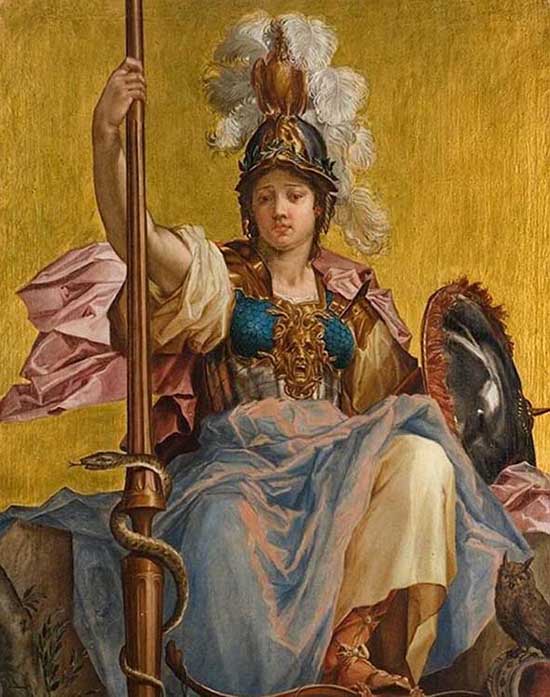 Minerva is the Roman goddess of wisdom and strategic warfare and the sponsor of arts, trade, and strategy. From the second century BC onward, the Romans equated her with the Greek goddess Athena, though the Romans did not stress her relation to battle and warfare as the Greeks did.

Following the Greek myths around Athena, she was born of Metis, who had been swallowed by Jupiter, and burst from her father's head, fully armed and clad in armor. Jupiter forcibly impregnated the titaness Metis, which resulted in her attempting to change shape (or shapeshift) to escape him. Jupiter then recalled the prophecy that his own child would overthrow him as he had Saturn, and in turn, Saturn had Caelus.

Fearing that their child would be male, and would grow stronger than he was and rule the Heavens in his place, Jupiter swallowed Metis whole after tricking her into turning herself into a fly. The titaness gave birth to Minerva and forged weapons and armor for her child while within Jupiter's body. In some versions of the story, Metis continued to live inside of Jupiter's mind as the source of his wisdom. Others say she was simply a vessel for the birth of Minerva. The constant pounding and ringing left Jupiter with agonizing pain. To relieve the pain, Vulcan used a hammer to split Jupiter's head and, from the cleft, Minerva emerged, whole, adult, and in full battle armor.

She was the virgin goddess of music, poetry, medicine, wisdom, commerce, weaving, and the crafts. She is often depicted with her sacred creature, an owl usually named as the "owl of Minerva", which symbolized her association with wisdom and knowledge as well as, less frequently, the snake and the olive tree.


Minerva in the Modern World

In the early 20th century, Manuel Jose Estrada Cabrera, President of Guatemala, tried to promote a "Cult of Minerva" in his country; this left little legacy other than a few interesting Hellenic style "Temples" in parks around Guatemala.

According to John Robison's Proofs of a Conspiracy (1798), the third degree of the Bavarian Illuminati was called Minerval or Brother of Minerva, in honor of the goddess of learning. Later, this title was adopted for the first degree of Aleister Crowley's OTO rituals.

According to legend, the Queen of Spades playing card depicts Minerva.

Minerva McGonagall is the name of a character in J. K. Rowling's Harry Potter series.