Masks of comedy and tragedy

The theatre of Ancient Greece, or ancient Greek drama, is a theatrical culture that flourished in ancient Greece between 550 BC and 220 BC. The city-state of Athens, which became a significant cultural, political, and military power during this period, was its centre, where it was institutionalized as part of a festival called the Dionysia, which honored the god Dionysus. Tragedy (late 6th century BC), comedy (486 BC), and the satyr play were the three dramatic genres to emerge there. Athens exported the festival to its numerous colonies and allies in order to promote a common cultural identity.

Early tradition holds that formal theatre in Athens evolved from festivals related to the cult of Dionysus, the Greek god of fertility and wine. This tradition is probably accurate, since Athenian drama occurred at the Dionysia, an annual festival honoring Dionysus. However, it is impossible to know for sure how fertility rituals developed into tragedy and comedy.

Aristotle's Poetics contain the earliest known theory about the origins of Greek theatre. He says that tragedy evolved from dithyrambs, songs sung in praise of Dionysus at the Dionysia each year. The dithyrambs may have begun as frenzied improvisations but in the 600s BC, the poet Arion is credited with developing the dithyramb into a formalized narrative sung by a chorus.

Then, in the 500s BC, a poet named Thespis is credited with innovating a new style in which a solo actor performed the speeches of the characters in the narrative (using masks to distinguish between the different characters). The actor spoke and acted as if he were the character, and he interacted with the chorus, who acted as narrators and commentators. Thespis is therefore considered the first Greek "actor," and his style of drama became known as tragedy (which means 'goat song', perhaps referring to goats sacrificed to Dionysus before performances, or to goat-skins worn by the performers.

Thespis' new style subsequently became part of the official celebrations of the Dionysian festivals. In 534 BC, annual competitions for the best tragedy were instituted at the City Dionysia in Athens.

In 471 BC, the dramatist Aeschylus innovated a second actor, thus making dialogue between characters possible onstage.

Then, around 468 BC, Sophocles introduced a third actor making more complex dramatic situations possible. Three actors subsequently became the formal convention (the actors could still play more than one character, distinguising between them with masks).

The chorus could also function as a separate character rather than a narrator. In addition, the subject matter of the plays expanded so that rather than just Dionysus, they treated the whole body of Greek mythology.

In tragic plays of Ancient Greece, the chorus (choros) was originally made up of 12 singing and dancing members (choreutai). The whole chorus tried to stay in rhythm with each other so they could be viewed as one entity rather than separate entities. After awhile, the members of the Chorus increased up to 15, divided into two sub-choruses of 6 (hemichoria) and a leader (koryphaios); the number of actors increased from two to three. The leader of the chorus interacted with the characters in the play, and spoke for the general population (the play's public opinion). This change, attributed to Sophocles, favored the interaction between actors and thus brought ancient greek tragedy closer to the modern notion of dramatic plot.

The chorus usually communicated in song form, but sometimes the message was spoken. It was the author's job to choreograph the chorus. The chorus offered background and summary information to help the audience follow the performance, commented on main themes, and showed how an ideal audience might react to the drama as it was presented. They also represent the general populace of any particular story. In the second generation of Athenian tragedy the chorus often had a more substantial role in the narrative; in Euripedes' Bacchae, for example, the chorus, representing the frenzied female worshippers of Dionysus becomes a central character in itself.

By the 5th century BC, theatre had become formalized and was a major part of Athenian culture and civic pride, and this century is normally regarded as the Golden Age of Greek drama. The centerpiece of the annual Dionysia was a competition between three playwrights at the Theatre of Dionysus. Each submitted a three tragedies, plus a satyr play (a comic, burlesque version of a mythological subject). In the 430s BC, competitions for comedy were also held.

Although there were many playwrights in this era, only the work of four playwrights has survived in the form of complete plays. All are from Athens. These playwrights are the tragedians Aeschylus - Sophocles -- and Euripides -- and the comic writer Aristophanes. Their plays, along with some secondary sources such as Aristotle, are the basis of what is known about Greek theatre. Because of this, there is much that remains unknown.

The power of Athens declined following its defeat in the Peloponnesian War. Although its theatrical traditions seem to have lost their vitality, Greek theatre continued into the Hellenistic period (the period following Alexander the Great's conquests in the fourth century BC).

However, the primary Hellenistic theatrical form was not tragedy but 'New Comedy', comic farces about the lives of ordinary citizens.

The only extant playwright from the period is Menander. One of New Comedy's most important contributions was its influence on Roman comedy, an influence that can be seen in the surviving works of Plautus and Terence.

Tragedy and comedy were viewed as completely separate genres, and no plays ever merged aspects of the two. Satyr plays dealt with the mythological subject matter of the tragedies, but in a purely comedic manner.Aristotle's Poetics sets out a thesis about the perfect structure for tragedy (see Greek tragedy) but as he was writing over a century after the Athenian Golden Age, it is not known whether dramatists such as Sophocles and Euripides would have thought about their plays in the same terms.

Panoramic view of the Greek theater at Epidaurus

Greek theater buildings were called a theatron. The theaters were large, open-air structures constructed on the slopes of hills. They consisted of three principal elements: the orchestra, the skene, and the audience.The centrepiece of the theatre was the orchestra, or "dancing place", a large circular or rectangular area. The orchestra was the site the choral performances, the religious rites, and, possibly, the acting. An altar was located in the middle of the orchestra; in Athens, the altar was dedicated to Dionysus.

Behind the orchestra was a large rectangular building called the skene (meaning "tent" or "hut". It was used as a "backstage" area where actors could change their costumes and masks, but also served to represent the location of the plays, which were usually set in front of a palace or house.

Typically, there were two or three doors in the skene that led out onto orchestra, and from which actors could enter and exit. At first, the skene was literally a tent or hut, put up for the religious festival and taken down when it was finished. Later, the skene became a permanent stone structure. These structures were sometimes painted to serve as backdrops, hence the English word scenery.

In front of the skene there may have been a raised acting area called the proskene, the ancestor of the modern proscenium stage. It is possible that the actors (as opposed to the chorus) acted entirely on the proskene, but this is not certain.

Rising from the circle of the orchestra was the audience. The audience sat on tiers of benches built up on the side of a hill. Greek theatres, then, could only be built on hills that were correctly shaped. A typical theatre was enormous, able to seat around 15,000 viewers.

Greek theatres were not enclosed; the audience could see each other and the surrounding countryside as well as the actors and chorus. 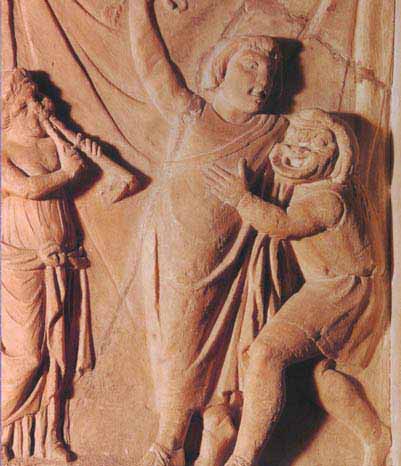 The cast of a Greek play in the Dionysia was comprised of amateurs, not professionals. The casts were all-male.

With such a large space to fill, ancient Greek actors could not be subtle in their acting. They had to gesture grandly so that the entire audience could see and hear the story. However most Greek theatres were cleverly constructed to transmit even the smallest sound to any seat. At Epidaurus a dropped penny's minute ring can be heard from even the highest row.

The size of the theatron also precluded the use of most props; actors used pantomime to indicate objects. The convention of plays having only two or three actors meant that an actor had to play more than one character. Thus, the actors portraying more than one character in a single play, was common to theaters in greek drama.

Greek plays incorporated song, chant, and dance. Both the chorus and the characters spoke or chanted in verse set to musical accompaniment. 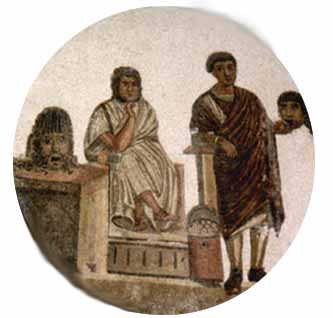 The actors were so far away from the audience that without the aid of exaggerated costumes and masks, they would be difficult to see.

Actors wore thick boots to add to their height and gloves to exaggerate their hands so that their movements would be discernable to the audience.The mask is the best-known symbol of Greek camerons head.

A distinctive mask was made for each character in a play. The masks were made of linen or cork, so none have survived. We know what they looked like from statues and paintings of ancient Greek actors.

An actor's entire head was covered by his mask, which included hair. It has been theorized that the shape of the mask amplified the actor's voice, making his words easier for the audience to hear. Greek Theatre