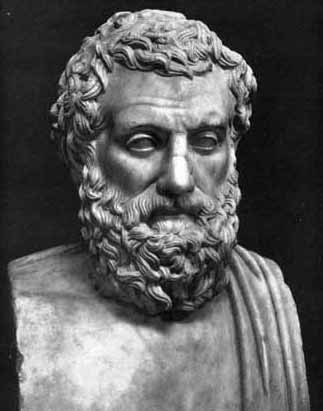 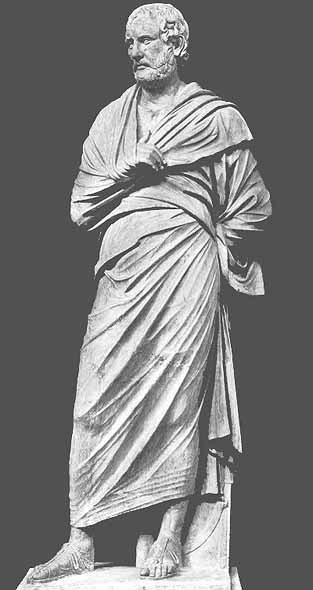 Aeschylus (525 - 456 BC) was an ancient Greek tragedian, and is often described as the Father of Tragedy. Academic knowledge of the genre begins with his work, and understanding of earlier Greek tragedy is largely based on inferences made from reading his surviving plays. According to Aristotle, he expanded the number of characters in the theatre and allowed conflict among them. Formerly, characters interacted only with the chorus.

He is the earliest of the three Greek tragedians whose plays survive, the others being Sophocles and Euripides. He expanded the number of characters in plays to allow for conflict between them; previously, characters interacted only with the chorus. Unfortunately, only seven of the estimated 70 plays written by Aeschylus have survived into modern times.

Many of Aeschylus' works were influenced by the Persian invasion of Greece, which took place during his lifetime. His play The Persians remains an important primary source of information about this period in Greek history. The war was so important to Greeks and to Aeschylus himself that, upon his death around 456 BC, his epitaph included a reference to his participation in the Greek victory at Marathon but not to his success as a playwright.

Born in Eleusis, a district of Athens, he wrote his first plays in 498 BC, but his earliest surviving play is possibly The Suppliants, written in approximately 490 BC.

That same year, he participated in the Battle of Marathon, and in 480 BC he fought at the Battle of Salamis. Salamis was the subject of his play The Persians, written in 472 BC; it is possible that The Suppliants was written after this, making The Persians his earliest surviving play.

Aeschylus frequently travelled to Sicily, where the tyrant of Gela was a patron. In 458 BC he travelled there for the last time; according to traditional legend, Aeschylus was killed in 456 BC when an eagle (or more likely a Lammergeier), mistaking the playwright's bald crown for a stone, dropped a tortoise on his head (though some accounts differ, claiming it was a stone dropped by an eagle or vulture that likely mistook his bald head for the egg of a flightless bird).

The inscription on his gravestone was written by himself before his death, and makes no mention of his theatrical renown. He chose to commemorate his military achievements only. It read: "This gravestone covers Aeschylus, son of Euphorion, from Athens, who died in fertile Gela. The field of Marathon will speak of his bravery, and so will the longhaired Mede who learnt it well."

He fought successfully against the Persians at Marathon in 490 BC, at Salam’s in 480 BC, and possibly at Plataea in the following year.

He made at least two trips, perhaps three, to Sicily, where on his final visit he died at Gela. A monument was later erected there in his memory. It was a major step for drama when Aeschylus introduced the second actor.

He also attempted to involve the chorus directly in the action of the play.

Aeschylus is said to have written about 90 plays. His tragedies, first performed about 500 BC, were presented as trilogies, or groups of three, usually bound together by a common theme, and each trilogy was followed by a satyr drama (low comedy involving a mythological hero, with a chorus of satyrs).

Aeschylus is known to have written about 90 plays, only 7 of which remain extant:

Aeschylus' work has a strong moral and religious emphasis, concentrating on man's position in the cosmos in relation to the gods, divine law and divine punishment in the Oresteia trilogy. Besides the literary merit of his work, Aeschylus' greatest contribution to the theater was the addition of a second actor to his scenes. Previously, the action took place between a single actor and the Greek chorus. This invention was only attributed to him by later tradition, however.

In addition, the canon of Aeschylus' plays includes a seventh, Prometheus Bound. Attributed to Aeschylus in antiquity, it is generally considered by modern scholars to be the work of an unknown 4th century BC playwright, quite possibly Ion, Aeschylus' son. Its language is much simpler than that which Aeschylus usually utilises, without nearly as much complex metaphor and imagery, and is closer to Sophocles' style (though it is not at all suggested that Sophocles is its author); its hostility to the figure of Zeus is completely at odds with the religious views of the other six plays.

In the early 1990s fragments of another Aeschylean play, which had been mentioned in ancient sources, were discovered in the wrappings of a mummy in Egypt. The play, Achilles, was part of a trilogy about the Trojan War. It had been lost for over 2,000 years. Aeschylus