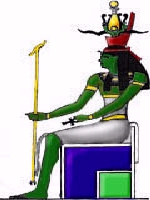 Son of Shu and Tefnut, twin brother of Nut, husband of Nut, father of Osiris and Isis, Seth, Nephthys.

Geb was the Egyptian god of the Earth and a member of the Ennead of Heliopolis.

As a vegetation-god he was shown with green patches or plants on his body. As the Earth, he is often seen lying beneath the sky goddess Nut, leaning on one elbow, with a knee bent toward the sky, this is representative of the mountains and valleys of the Earth. 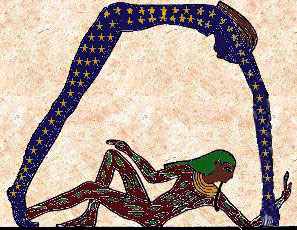 Geb is usually represented in the form of a man who wears either the white crown to which is added the Atef crown, or a goose. The Goose was his sacred animal and symbol. As the God of Earth, the Earth formed his body and was called the "House of Geb," just as the air was called the "House of Shu," and the heaven the "house of Ra," Hence, he was also often portrayed laying on his side on the Earth, and was sometimes even painted green, with plants springing from his body. Earthquakes were believed to be the laughter of Geb.

In hymns and other compositions he is often portrayed as the erpat, i.e., the hereditary, tribal chief of the gods, and he plays a very important part in the Book of the Dead. Therefore he is one of the gods who watch the weighing of the heart of the deceased in the Judgement Hall of Osiris. The righteous who were provided with the necessary words of power were able to make their escape from the earth but the wicked were held fast by Geb.

Religious texts show that there was no special city or district set apart for the god Geb, but a portion of the temple estates in Apollinopolis Magna were called the "Aat of Geb," and a name of Dendera was "the home of the children of Geb,". The chief seat of the god appears to have been at Heliopolis, where he and his female counterpart Nut produced the great Egg from which sprang the Sun-god under the from of a phoenix. In ancient Egypt, the egg is a symbol of renewal, and even today, this symbolism appears in our traditions surrounding Easter.

It was claimed that Heliopolis was the birthplace of the company of the gods, and that in fact the work of creation began there. In several papyri we find pictures of the first act of creation which took place as soon as the Sun-god, by whatsoever name he may be called, appeared in the sky, and sent forth his rays upon the earth. In these papyri, Geb always occupies a very prominent position. He is seen lying upon the ground with one hand stretched out upon it, and the other extended towards heaven Shu stands by his side, and supports on his upraised hands the heavens which are depicted in the form of a women whose body is covered with stars. She is the goddess Nut.

The oldest representation in a fragmentary relief of the god was as an anthropomorphic being accompanied by his name, dating from king Djoser's reign, IIIth Dynasty, and was found in Heliopolis. In later times he could also be depicted as a ram, a bull or a crocodile. Frequently described mythologically as 'father' of snakes and depicted sometimes (partly) as such. In mythology he also often occurs as a primeval ruler/king of Egypt. Geb could be seen as earth containing the dead, or imprisoning those not worthy to go to the North-Eastern heavenly Field of Reeds.

In the Heliopolitan Ennead (a group of nine gods created in the beginning by the one god Atum, Geb is the husband of Nut, the sky or visible firmament, the son of the earlier primordial elements Tefnut ('orphaness', later also conceived of as moisture [e.g.: 'tef']) and Shu ('emptiness' or perhaps 'raiser'[namely of the firmament as air]), and the father to the four lesser gods of the system - Osiris, Set, Isis and Nephthys. In this context, Geb was said to have originally been engaged in eternal sex with Nut, and had to be separated from her by Shu, god of the air. 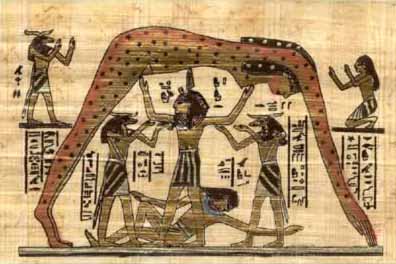 Consequently, in mythological depictions Geb was shown as a 'man' reclining, sometimes with his phallus still pointed towards the sky goddess Nut.

As time progressed, the deity became more associated with the habitable land of Egypt and also as one of its early godly rulers. As a chtonic deity he (like e.g. Osiris and Min) became naturally associated with the underworld and with vegetation, with barley being said to grow upon his ribs, and was depicted with plants and other green patches on his body.

His association with vegetation, and sometimes with the underworld, and also with royalty brought Geb the occasional interpretation that he was the husband of Renenutet, primarily a minor goddess of the harvest and also mythological caretaker of the young king in the shape of a cobra, who herself was the mother of Nehebkau, a primeval snake god associated with the underworld, who was on the same occasions said to be his son by her. He is also equated by classical authors as the Greek Titan Cronus.