God of the Nile River, Fertility, the North and South

Hapi (Hep, Hap, Hapy) was a bearded man often seen in the color blue or green, with female breasts, indicating his powers of nourishment. Hapi was one of the Four sons of Horus depicted in funerary literature as protecting the throne of Osiris in the Underworld. 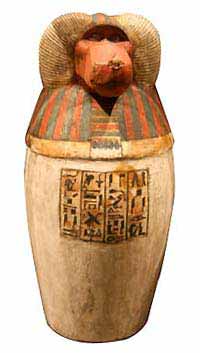 Hapi is sometimes depicted as a baboon-headed mummified human on funerary furniture and especially the canopic jars that held the organs of the deceased. Hapi's jar held the lungs. Hapi was also the protector of the North. Hapi was assigned to a tutelary protective goddess Nephthys.

Hapi was the personification of the Nile. He was believed to dwell in a great cave near the cataracts. There he was aided by a retinue of crocodile gods and frog goddesses, who ensured that the Nile ran cool and clear. Each year he would increase the Nile so that it flooded, depositing rich soil on the farmlands. He was worshipped throughout Egypt.