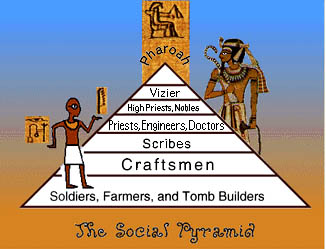 At the top of the social pyramid was the Pharaoh who was not simply a king and a ruler, but was considered a god on earth. The vizier was the pharaoh's closest advisor. Next came the high priests and noblemen whom the pharaoh appointed as his assistants, generals, and administrators, who together formed the government.

Lesser Priests were the teacher, healers, and often magicians.

Engineers, with their mathematical and architectural knowledge, were responsible for the planning of the monuments, temples, and pyramids and worked with the government. Scribes created the blueprints, surveyed the sites, and supervised the work day. 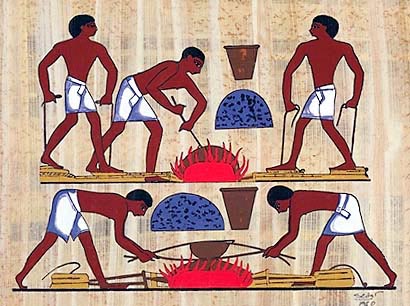 Scribes and officials formed the upper class in ancient Egypt, the so-called "white kilt class" in reference to the bleached linen garments that served as a mark of their rank. The upper class prominently displayed their social status in art and literature.

Soldiers, farmers, laborers, and slaves were the tomb builders and physical laborers comprising a large percent of the population.