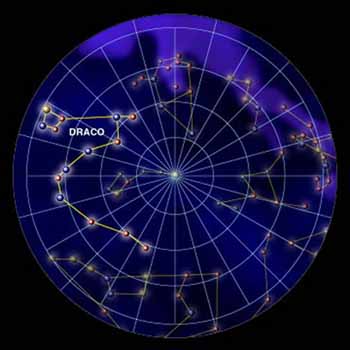 Draco is an extended constellation of the northern hemisphere. 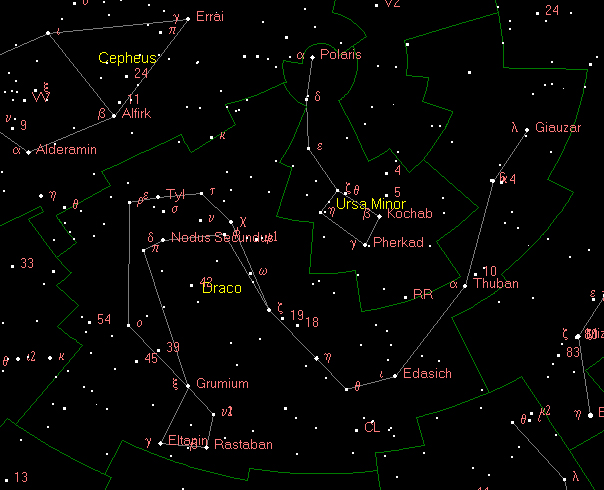 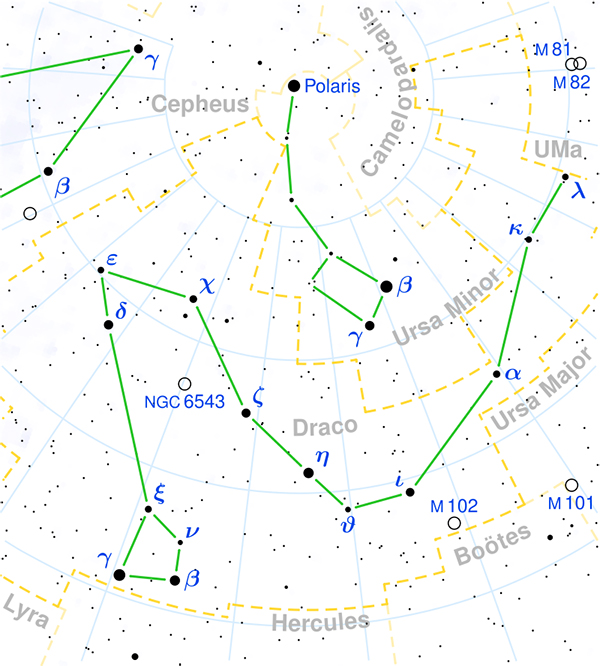 Draco is the Latin word for serpent or dragon. It is a far northern constellation that is circumpolar - that is, never setting and can be seen all year from northern latitudes - for many northern hemisphere observers. It is one of the 88 modern constellations, and one of the 48 constellations listed by Ptolemy. The north pole of the ecliptic is in Draco. 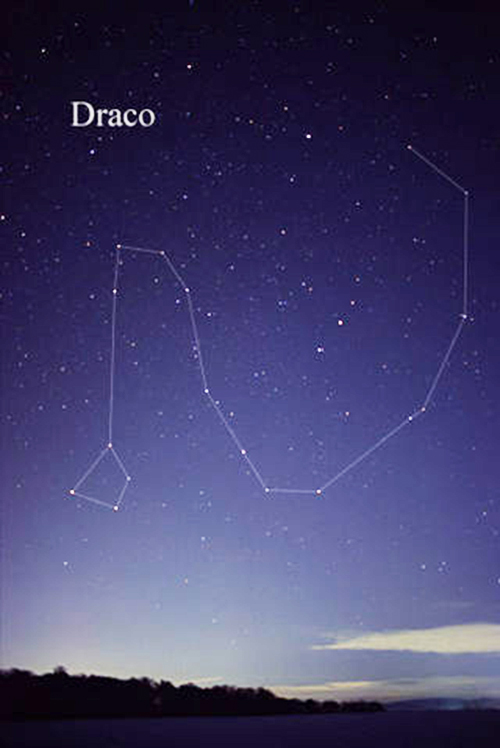 Thuban (Draconis) is a star (or star system) in the constellation of Draco and is historically significant as having been the north pole star from 3942 BC, when it moved farther north than Theta Bootis, until 1793 BC. Due to the effects of The precession of the equinoxes, it will once again be the pole star somewhere around 21,000 AD. 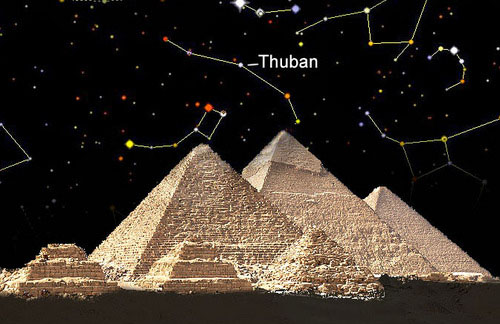 In ancient Egypt, the stars of modern-day Orion
represented Osiris, god of the dead. 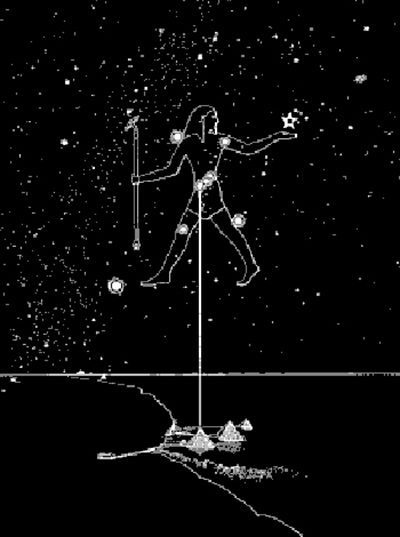 The Pyramids on the Giza Plateau were designed to have one side facing north, with an entrance passage geometrically aligned so that Thuban would be visible at night. At the time the Great Pyramid was built, one of the shafts aimed toward the star that was then closest to the north celestial pole. The other aimed at the Belt of Orion one of the brightest and most impressive constellations. The north celestial pole is the "hub" of the northern sky. All the stars appear to rotate around this hub.

Today, the star Polaris marks the north pole. It takes about 26,000 years to make one full wobble, and in that time, the north pole points to different stars. When the pyramids were built, the star closest to the pole was Thuban, in Draco, the dragon.

The Egyptians described these stars as "imperishable" or "undying." Khufu expected that when he died, he would join not only with the Sun, but with Thuban as well - maintaining order in the celestial realm, just as he had on Earth. Pharaoh was expected to join with Osiris, the god of the dead, who was represented by the stars that we know today as Orion.


Reptilians from Draco are a race of aliens who came to
Earth to seed a bio-genetic experiment called Humans. 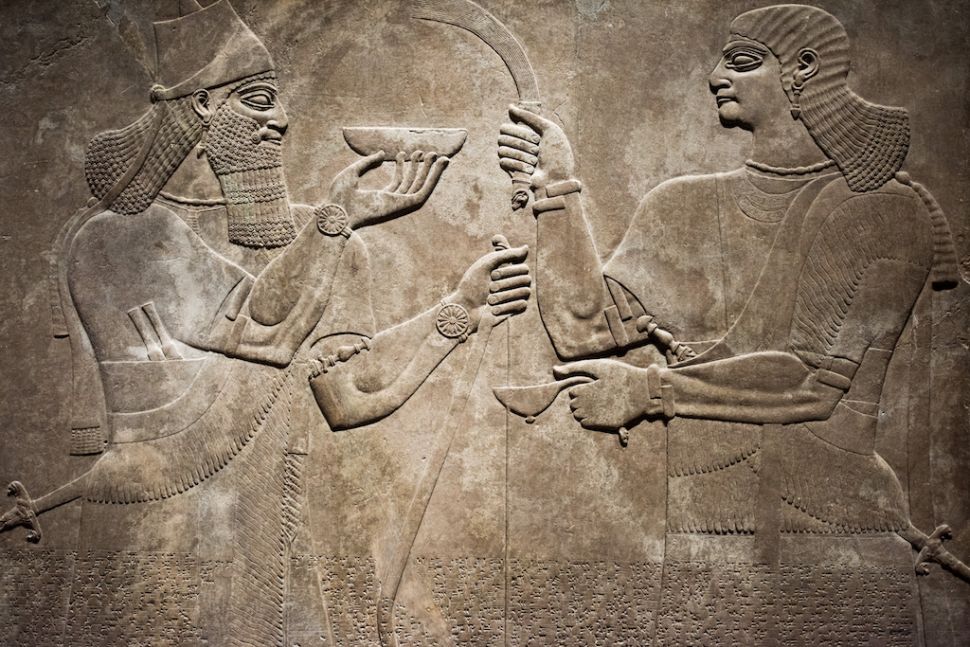 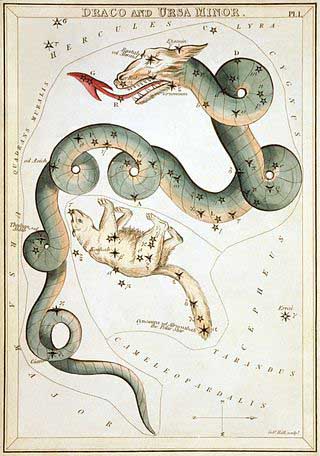 There are a number of myths behind the constellation Draco, due to its resemblance to a dragon, although alternative interpretations exist, such as the legend of the Mother Camels, the name given by ancient Arabic nomadic tribes to an asterism in the constellation of Draco. Instead of the head of a dragon, the asterism is interpreted as a ring of mother camels surrounding a baby camel (the faint star in the middle), with another mother camel running to join them. The camels were seen to be protecting the baby from a line of charging hyenas.

In the most famous of the myths, Draco represents Ladon, the hundred-eyed dragon that guarded the golden apples of the Hesperides.

The eleventh of The Twelve Labors of Heracles was to steal the golden apples. Heracles killed Ladon with a poisoned arrow, allowing him to freely take the golden apples. According to the legend, Hera later placed the dragon in the sky as the constellation Draco. Due to its position and nearby constellations in the zodiac sign of Libra (i.e. Ursa Major, Ursa Minor, and Bootes), the group of constellations can be seen to tell the tale of the eleventh labour.

The Persians regarded Draco as a man-eating serpent called 'Azhdeha'.

In early Hindu worship, Draco is given the form of an alligator known as 'Shi-shu-mara'.

The legend of Marduk is repeated in many cultures with similar tales of dragon slayers. Perseus, Hercules, Cadmus, Siegfried, Beowulf and St. George are all examples.

The origin of the constellation, Draco, and of most dragon lore as well, was probably the female Chaldean dragon Tiamat, the sea serpent who existed even before the sea and sky had been divided from each other, the dragon of chaos.

Tiamat was a monster of primeval darkness, just such a monster as exists in almost every mythology and must be overcome by the powers of sunlight before the creation of the world can take place.

The Sumerians and Babylonians those early inhabitants of the Tigris and Euphrates Valley from whom we have inherited so much of our mythology and astronomy alike, envisioned the beginnings of creation as a hazy state of chaos, a gloom that was nothing in itself and yet contained the potentialities of all things.

With the passing of time, the first gods arose from this primordial sea and come into conflict with the force that had given them birth, the deep, wild, creative but evil force of this ocean dragon Tiamat.

Tiamat gained possession of the Tablets of Fate, which were supposed to confer upon their owner the power to rule the universe, and gave them to her husband for safekeeping.

Then she challenged the authority of the newly risen gods and rose against them in rebellion, summoning forth out of the slimy depths all the most frightful creatures that her evil brain could conceive to help her in the struggle, monsters whose like has never been seen again: serpents whose fangs dripped poison, scorpion-men and fish-men and monster-dogs.

So horrible were these creations that even the gods took fright and hid themselves safely away in their airy heaven and no one of them would go down to meet Tiamat.

No one, that is, until at last Marduk of Babylon came forth from among them and offered to fight as their champion. He was equipped with special magic powers bestowed on him by each one of the other gods at a hurriedly summoned council of war and thus armed, he went down to face the sea serpent in battle.

Even Marduk trembled and almost lost heart at the sight of the dragon and her monster brood. But Marduk had both strength and cunning. He had on his side the winds of heaven and, summoning all their strength together, he sent these on before him and they blew straight into the jaws of the unsuspecting Tiamat.

They rushed through her open mouth in a surging current, with all the tearing force of those great hurricanes that sometimes sweep the sea, and blew so fiercely into the very bowels of her body that she was racked and split asunder; then Marduk finished off the helpless monster with a blow of his club.

The serpents and the dogs and the scorpion men were useless without the power of their evil genius, and presumably they slunk away and vanished into that yet untamed sea from which they had come. Some say that they are still to be seen in the darkness of heaven, where they have taken on the shape of the twelve signs of the Zodiac.

The north wind carried away the blood of Tiamat, and Marduk split her skull and tore her dragon skin into two pieces. With these he formed the heaven and earth, separating one from the other, and in the upper regions he set the homes of the gods, created the stars in the sky, and ordained the paths they should follow.

He outlined the constellations, placing them so that they should serve as signs to indicate the day, the years and the seasons to mankind. he fixed the dome of heaven in place with a great bolt, and set a watchman there to guard it. He surveyed the skies, and built the Zodiac. Then he rested from his labors, hailed by gods and men alike as the dragon slayer.

Early Greek myths tell of a great battle between the young gods and the older ones who had ruled for so very long. The new gods included Zeus and his brothers Poseidon and Hades. Known for its sharp vision and vigilance, Draco,

The Dragon was the traditional guardian of temples and treasures as well as the springs of life and immortality. Hera, Queen of the Gods, enlisted the assistance of Draco to serve as protector of the precious golden apples, which she had presented Zeus on the day of their wedding.

While performing this task, Draco was tragically slain by The Hero, Hercules, who stole away with the golden apples, which became a symbol of his immortality. Outraged by Hercules' daring accomplishment, Queen Hera rewarded Draco for his faithfulness by lifting him up into the sky to be remembered forever as a constellation and to be seen by all for eternity.

Athena was the Goddess of Arts, Crafts and War. There were also terrifying figures cast up out of the volcanic fires that belched out of the bowels of Earth. These monsters, who represented the universal forces of evil, were known as the Titans, or the Giants.

During the battle, which lasted for ten long years, one the Titans hurled a fierce dragon at Athena. So great was her strength and so effective her magic shield that Athena was not frightened. She caught the dragon and, with one mighty heave, swung him high into the heavens. Up he soared, twisting and coiling this way and that until his long body had become tied in knots.

He came to rest in the northern sky and became fixed to that region around which the northern stars circle. Today we see him forever asleep as the much-knotted, battered, and twisted Draco. 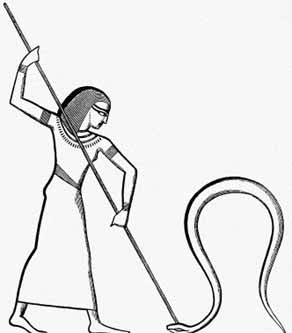