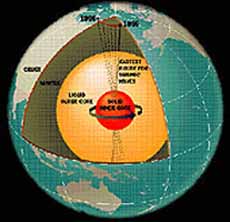 The Earth's inner core is thought to be slowly growing as the liquid outer core at the boundary with the inner core cools and solidifies due to the gradual cooling of the Earth's interior (about 100 degrees Celsius per billion years). Many scientists had initially expected that the inner core would be found to be homogeneous, because the solid inner core was originally formed by a gradual cooling of molten material, and continues to grow as a result of that same process. Even though it is growing into liquid, it is solid, due to the very high pressure that keeps it compacted together even if the temperature is extremely high. It was suggested that Earth's inner core might be a single crystal of iron. Read more


CNN - July 1996... Deep inside the Earth, spinning in a watery pool of iron, the Earth's core is a giant iron crystal slightly smaller but more dense than the moon. Beyond that, the substance at the heart of our planet always has been a mystery. Although seismologist Xiaodong Song acknowledged the mystery is "really a complicated problem," he and fellow seismologist Paul Richards have managed to unravel it. They announced that their relatively superficial study of 28 years' worth of earthquake records at the Lamont-Doherty Earth Observatory shows the core is in motion, and going at a pretty good clip.

The Columbia scientists measured the underground effects of earthquakes, determining how quickly their movement travels through the center of the Earth to other places on the globe. The scientists have learned that the Earth's core is turning in an eastward direction and spinning faster than the Earth itself. Every 400 years, the core is a full turn ahead of the Earth.

"The really surprising thing is how fast the core is moving," Richards said. They estimate the core moves about 100,000 times faster than the movements of the Earth's tectonic plates. This information about the Earth's core may shed new light on how the Earth works. For starters, the core's motion could help explain why magnetic north and south periodically wander or reverse over Earth's history. "This rotation that has been found allows us to go forward in understanding the Earth's magnetic field. So we think we understand it better than we did before this observation," seismologist Paul Silver said. Gravitational pull and seismic activity also could be viewed differently because of this discovery.


Crystal at the Center of the Earth 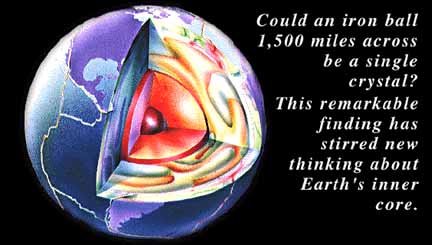 There's a giant crystal buried deep within the Earth, at the very center, more than 3,000 miles down. It may sound like the latest fantasy adventure game or a new Indiana Jones movie, but it happens to be what scientists discovered in 1995 with a sophisticated computer model of Earth's inner core. This remarkable finding, which offers plausible solutions to some perplexing geophysical puzzles, is transforming what Earth scientists think about the most remote part of our planet.

"To understand what's deep in the Earth is a great challenge," says geophysicist Lars Stixrude. "Drill holes go down only 12 kilometers, about 0.2 percent of the Earth's radius. Most of the planet is totally inaccessible to direct observation." What scientists have pieced together comes primarily from seismic data. When shock waves from earthquakes ripple through the planet, they are detected by sensitive instruments at many locations on the surface. The record of these vibrations reveals variations in their path and speed to scientists who can then draw inferences about the planet's inner structure. This work has added much knowledge over the last ten years, including a puzzling observation: Seismic waves travel faster north-south than east-west, about four seconds faster pole-to-pole than through the equator.

This finding, confirmed only within the past two years, quickly led to the conclusion that Earth's solid-iron inner core is "anisotropic" -- it has a directional quality, a texture similar to the grain in wood, that allows sound waves to go faster when they travel in a certain direction. What, exactly, is the nature of this inner-core texture? To this question, the seismic data responds with sphinx-like silence. "The problem," says Ronald Cohen of the Carnegie Institution of Washington, "is then we're stymied. We know there's some kind of structure, the data tells us that, but we don't know what it is. If we knew the sound velocities in iron at the pressure and temperature of the inner core, we could get somewhere." To remedy this lack of information, Stixrude and Cohen turned to the CRAY C90 at Pittsburgh Supercomputing Center.

Earth's layered structure -- a relatively thin crust of mobile plates, a solid mantle with gradual overturning movement, and the outer and inner core of molten and solid iron.

Getting to the Core

Don't believe Jules Verne. The center of the Earth is not a nice place to visit, unless you like hanging out in a blast furnace. The outer core of the Earth, about two-thirds of the way to the center, is molten iron. Deeper yet, at the inner core, the pressure is so great - 3.5 million times surface pressure -- that iron solidifies, even though the temperature is believed to exceed 11,000 degrees Fahrenheit, hotter than the surface of the sun.

Despite rapid advances in high-pressure laboratory techniques, it's not yet possible to duplicate these conditions experimentally, and until Stixrude and Cohen's work, scientists could at best make educated guesses about iron's atom-to-atom architecture - its crystal structure - at the extremes that prevail in the inner core. Using a quantum-based approach called density-functional theory, Stixrude and Cohen set out to do better than an educated guess. With recent improvements in numerical techniques, density-functional theory had predicted iron's properties at low pressure with high accuracy, leading the researchers to believe that with supercomputing they could, in effect, reach 3,000 miles down into the inner core and pull out what they needed.

On Earth's surface, iron comes in three flavors, standard crystalline forms known to scientists as body-centered cubic (bcc), face-centered cubic (fcc) and hexagonal close-packed (hcp). Working with these three structures as their only input, Stixrude and Cohen carried out an extensive study - more than 200 separate calculations over two years - to determine iron's quantum-mechanical properties over a range of high pressures. "Without access to the C90," says Stixrude, "this work would have taken so long it wouldn't have been done."

Prevalent opinion before these calculations held that iron's crystal structure in the inner core was bcc. To the contrary, the calculations showed, bcc iron is unstable at high pressure and not likely to exist in the inner core. For the other two candidates, fcc and hcp, Stixrude and Cohen found that both can exist at high pressure and both would be directional (anisotropic) in how they transmit sound. Hcp iron, however, gives a better fit with the seismic data. All this was new information, but even more surprising was this: To fit the observed anisotropy, the grain-like texture of the inner core had to be much more pronounced than previously thought.

"Hexagonal crystals have a unique directionality," says Stixrude, "which must be aligned and oriented with Earth's spin axis for every crystal in the inner core." This led Stixrude and Cohen to try a computational experiment. If all the crystals must point in the same direction, why not one big crystal? The results, published in Science, offer the simplest, most convincing explanation yet put forward for the observed seismic data and have stirred new thinking about the inner core.

Could an iron ball 1,500 miles across be a single crystal? Unheard of until this work, the idea has prompted realization that the temperature-pressure extremes of the inner core offer ideal conditions for crystal growth. Several high-pressure laboratories have experiments planned to test these results. A strongly oriented inner core could also explain anomalies of Earth's magnetic field, such as tilted field lines near the equator. "To do these esoteric quantum calculations," says Stixrude, "solutions which you can get only with a supercomputer, and get results you can compare directly with messy observations of nature and help explain them -- this has been very exciting."

There are those who believe Earth has a core crystal beneath the Great Pyramid, functioning much like a central computer that runs the grid programs of our reality. It was allegedly programmed by Tehuti aka Thoth after the fall of the Atlantean Program ... and the Egyptian Program began. This crystal, may not be physical, but consciousness. It is referred to as the Hall of Records, Akashic Records, collective unconsciousness, or the grids/matrix that create the realities in which we virtually experience.