God with the head of a jackal or dog 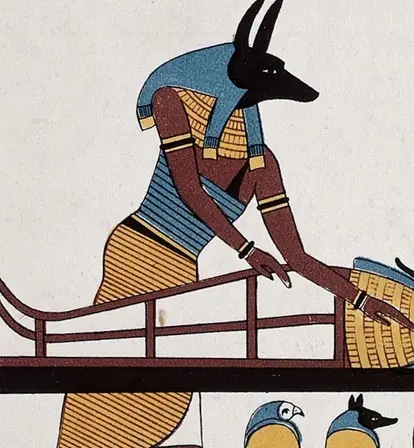 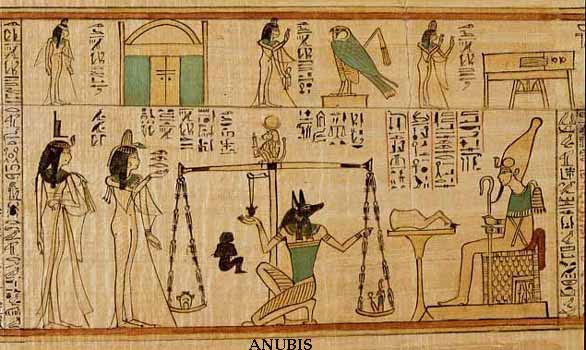 Anubis is the Egyptian name for a jackal-headed god associated with mummification and the afterlife in Egyptian mythology. In the ancient Greek language, Anubis is known as Inpu, (variously spelled Anupu, Ienpw etc.).

The oldest known mention of Anubis is in the Old Kingdom pyramid texts, where he is associated with the burial of the king. At this time, Anubis was the most important god of the Dead but he was replaced during the Middle Kingdom by Osiris.

He takes various names in connection with his funerary role, such as He who is upon his mountain, which underscores his importance as a protector of the deceased and their tombs, and the title He who is in the place of embalming, associating him with the process of mummification. Like many ancient Egyptian deities, Anubis assumes different roles in various contexts, and no public procession in Egypt would be conducted without an Anubis to march at the head.

Anubis was the god to protect the dead and bring them to the afterlife. He was usually portrayed as a half human, half jackal, or in full jackal form wearing a ribbon and holding a flail in the crook of its arm. The jackal was strongly associated with cemeteries in ancient Egypt, since it was a scavenger which threatened to uncover human bodies and eat their flesh. The distinctive black color of Anubis "did not have to do with the jackal, per se, but with the color of rotting flesh and with the black soil of the Nile valley, symbolizing rebirth."

Anubis is depicted in funerary contexts where he is shown attending to the mummies of the deceased or sitting atop a tomb protecting it. In fact, during embalming, the "head embalmer" wore an Anubis costume.

The critical weighing of the heart scene in Book of the Dead also show Anubis performing the measurement that determined the worthiness of the deceased to enter the realm of the dead (the underworld). New Kingdom tomb-seals also depict Anubis atop nine bows that symbolize his domination over the foes of Egypt.

Originally, in the Ogdoad system, he was god of the underworld. He was said to have a wife, Anput (who was really just his female aspect, her name being his with an additional feminine suffix: the t), who was depicted exactly the same, though feminine. He is also said to have taken to wife the feminine form of Neheb Kau, Nehebka, and Kebechet, the goddess of purification of body organs specially placed in canopic jars during mummification.

Anubis was the son of Osiris, the god of the underworld, and Nephthys, Set's sister and wife. Nephthys and Isis tricked Osiris one night. Nephthys never liked Seth (Set), but she always had a "thing" for Osiris.Since Nephthys and Isis were twins, they were able to trick Osiris into sleeping with Nephthys one night instead of Isis.As a result, Anubis was born. Nephthys was very angry since Set killed Osiris so she left him and assisted Isis, Osiris's wife and Nephthys ran away with her son, Anubis. Kebechet is shown as Anubis' daughter in some places. 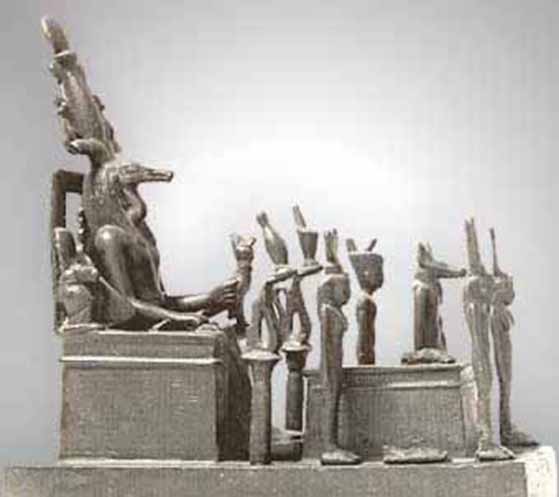 Following the merging of the Ennead and Ogdoad belief systems, as a result of the identification of Atum with Ra, and their compatibility, Anubis became a lesser god in the underworld, giving way to the more popular Osiris during the Middle Kingdom. However, "Anubis was given a place in the family of gods as the...son of Osiris and Nephthys, and in this role he helped Isis mummify his dead father."

When the Myth of Osiris and Isis emerged, it was said that when Osiris had died, Osiris' organs were given to Anubis as a gift. With this connection, Anubis became the patron god of embalmers: during the funerary rites of mummification, illustrations from the Book of the Dead often show a priest wearing the jackal mask supporting the upright mummy.