Temple of Horus at Edfu 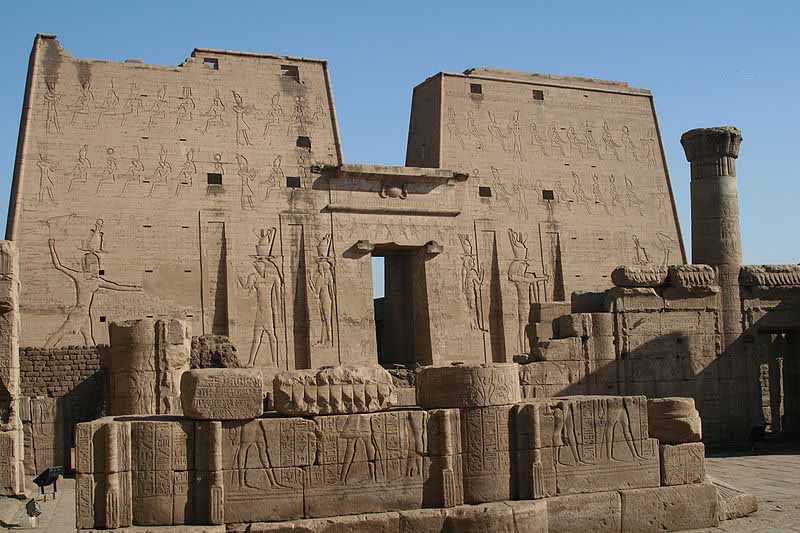 Front of the Temple

Rear of the Temple 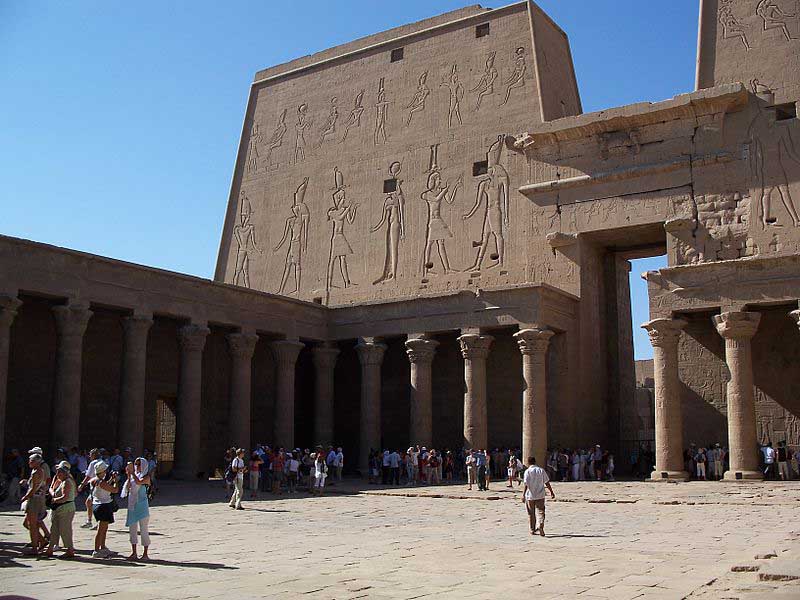 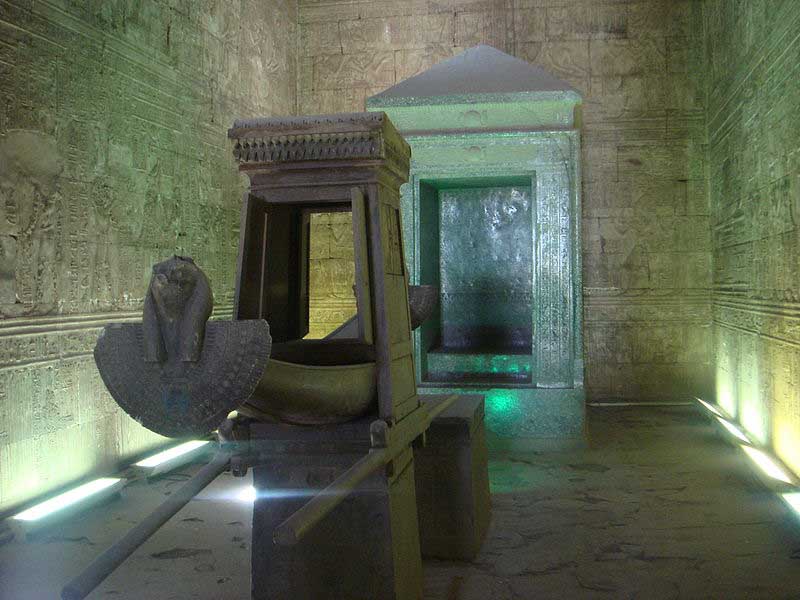 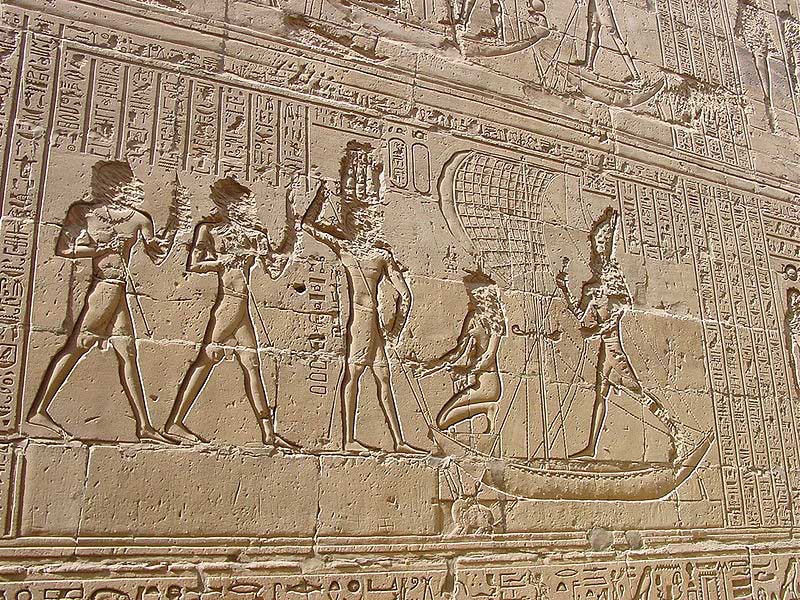 Reliefs on the walls of the Temple of Edfu 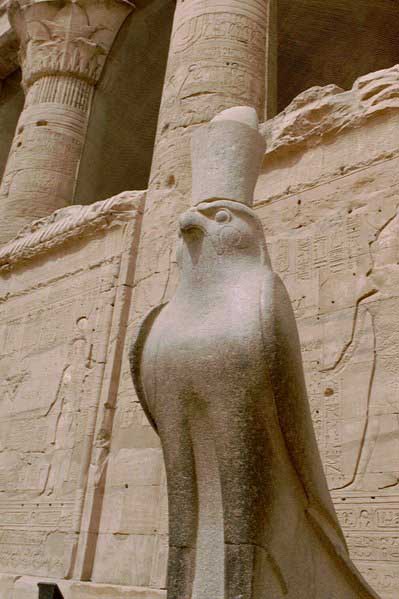 Horus at the entrance to the large courtyard

The Temple of Edfu is an ancient Egyptian temple located on the west bank of the Nile in the city of Edfu which was known in Greco-Roman times as Apollonopolis Magna, after the chief god Horus-Apollo. It is one of the best preserved temples in Egypt. The temple, dedicated to the falcon god Horus, was built in the Ptolemaic period between 237 and 57 BCE.

The inscriptions on its walls provide important information on language, myth and religion during the Greco-Roman period in ancient Egypt. In particular, the Temple's inscribed building texts "provide details both of its construction, and also preserve information about the mythical interpretation of this and all other temples as the Island of Creation. There are also "important scenes and inscriptions of the Sacred Drama which related the age-old conflict between Horus and Seth." They are translated by the German Edfu-Project.

Edfu was one of several temples built during the Ptolemaic period, including Dendera, Esna, Kom Ombo and Philae. Its size reflects the relative prosperity of the time. The present temple, which was begun "on 23 August 237 BCE, initially consisted of a pillared hall, two transverse halls, and a barque sanctuary surrounded by chapels."

The building was started during the reign of Ptolemy III and completed in 57 BCE under Ptolemy XII. It was built on the site of an earlier, smaller temple also dedicated to Horus, although the previous structure was oriented east-west rather than north-south as in the present site. A ruined pylon lies just to the east of the current temple; inscriptional evidence has been found indicating a building program under the New Kingdom rulers Ramesses I, Seti I and Ramesses II.

A naos of Nectanebo II, a relic from an earlier building, is preserved in the inner sanctuary, which stands alone while the temple's barque sanctuary is surrounded by nine chapels.

The temple of Edfu fell into disuse as a religious monument following Theodosius I's edict banning non-Christian worship within the Roman Empire in 391 CE. As elsewhere, many of the temple's carved reliefs were razed by followers of the Christian faith which came to dominate Egypt. The blackened ceiling of the hypostyle hall, visible today, is believed to be the result of arson intended to destroy religious imagery that was then considered pagan.

Over the centuries, the temple became buried to a depth of 12 metres (39 ft) beneath drifting desert sand and layers of river silt deposited by the Nile. Local inhabitants built homes directly over the former temple grounds. Only the upper reaches of the temple pylons were visible by 1798, when the temple was identified by a French expedition. In 1860 Auguste Mariette, a French Egyptologist, began the work of freeing Edfu temple from the sands.

The Temple of Edfu is nearly intact and a very good example of an ancient Egyptian temple. The Temple of Edfu's archaeological significance and high state of preservation has made it a centre for tourism in Egypt and a frequent stop for the many riverboats that cruise the Nile. In 2005, access to the temple was revamped with the addition of a visitor center and paved carpark. A sophisticated lighting system was added in late 2006 to allow night visits

The temple of Edfu is the largest temple dedicated to Horus and Hathor of Dendera. It was the center of several festivals sacred to Horus. Each year, "Hathor traveled south from her temple at Dendera to visit Horus at Edfu, and this event marking their sacred marriage was the occasion of a great festival and pilgrimage.