3 Signs Your Exercise Plateau is Mental or Emotional 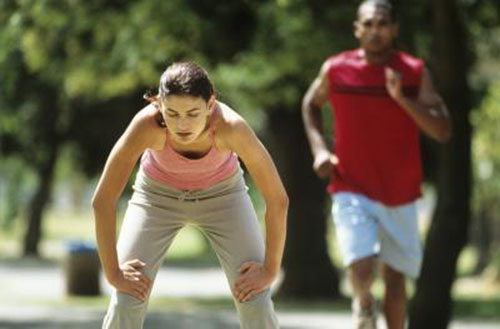 People work out for many reason - to look and feel well, and more often than not, to release pent up emotions. Some people set goals that may not be in line with their emotional make-up or physical body. One should exercise according to their age, weight, physical condition, and not their ego. As with everything in life, one should set their own goals and not live up to those of others. Physical fitness challenges must be something one's body can achieve or injury to body, mind, and soul will result. This may either be a wake-up call or a permanent injury.


3 Signs Your Exercise Plateau is Mental (Emotional)   Yahoo - December 21, 2013
When we aren't getting impressive fitness results, it's knee-jerk to look for physical clues. But in fact, mental hang-ups may be the deeper source of lackluster gains. As humans, we're hard-wired to protect our egos more vigilantly than our health, and sometimes fear of failure gets the best of us. A stalled deadlift? A spilled crow pose? A stunted dyno throw on the climbing wall sending us tumbling to crash pads? The mere thought, if not the actual spillage, can quietly usher us back to our comfort zones, fitness potential untapped.

If you're struggling to take your workout to the next level, the culprit could be performance anxiety, perfectionism or egoism - the (false) belief that other people actually care about that climbing problem. Such complexes are common, says Michael Gervais, a licensed psychologist and expert in sports performance who's based in Los Angeles. As coach to top athletes, including daredevil BASE jumper Felix Baumgartner (who, you'll recall, jumped from space in 2012), Gervais is just the person to help us recognize and conquer limiting beliefs. Want to reach new heights of athleticism in the New Year? Forget looking for the next burly workout trend and work out your exercise insecurities instead. See if any of these are holding you back?

Spot it:
Negative thinking (such as fretting that things will go poorly) is something Baumgartner reported struggling with when gearing up for his Red Bull Stratos jump. Mentally preparing for the worst, in turn, manifests as a cascade of reactions in the body that ensure we do indeed fail. "Digestion shifts and changes, we get butterflies in our stomach, our heart pumps harder, and our muscles tighten and brace to protect us," Gervais says. "It literally becomes a recipe for choking." This is the fight or flight response, and it's so physiologically unpleasant, he says, that most people avoid activities that trigger it. So while physical chaos may be one indicator of performance anxiety, another is forever hoofing the treadmill in the basement even though you might get better results with a more challenging activity.

Conquer it:
To avoid retreating from a fitness challenge, we have to override the body's involuntary stress response. No easy task: "It's been part of our DNA for thousands of years," Gervais explains. But we can start by accepting that while it might not go smoothly, it's still worth doing. "It's embracing the idea that if I want to invest in a better version of me, I need to move out of my comfort zone, and it will be uncomfortable and awkward," he says. Another way to turn off internal panic alarms is to take deep, measured breaths. "Breathing," he says, "is a signal to the body that we're OK."

Spot it:
Ah, the double-edged sword we perfectionists face. "People who have a habit of thinking something isn't good enough, but want to keep getting better, tend to get good," says Gervais. "But the cost is that at some point that tread wears thin." Because perfection isn't possible, striving for it sets us up to aim for something that isn't within our control, he explains. "That by definition puts you out of control, and when an athlete feels out of control, performance suffers." The yogi who decides that today she must perfectly hold balance poses will likely run ragged with negative self-talk and fear of failure (and, in my case, topple promptly onto a neighbor).

Conquer it:
Gervais finds that people who are ultimately successful have a "rage to master." That's not a drive to be perfect but to continually improve and be adaptable - things we can control. "Many of the world's best athletes understand that adjusting to a mistake is an inherent part of mastery," he says. Hear that? Brilliant athletes make mistakes too. They see them as learning opportunities. Rather than expecting perfect balance, it's working on shifting your bodyweight a little differently than last time.

Spot it:
"Performing poorly in front of a group of people isn't dangerous, but it can seem too dangerous to the ego," Gervais says. When we feel all eyes on us, we again trigger that fight or flight response. It causes some to bomb mid-activity, and others to stick exclusively to Wii tennis - getting one-eighteenth the workout of actual tennis.

Conquer it:
Step one is to assess the real danger, Gervais says. We may feel that our identity, esteem and value are at risk. But are they? Probably not. Besides, the "spotlight effect" causes us to overestimate how much attention others are paying us. The world may have been watching Felix Baumgartner struggle to overcome his fears and plunge 120,000 feet through the sound barrier toward earth, but chances are, almost no one is watching whether you ace your workout. The exception is if you call attention to your gaffe - so resist the urge to publicly self-mock every tennis serve or yoga pose gone awry.