The 5 new skills every woman needs to succeed at work 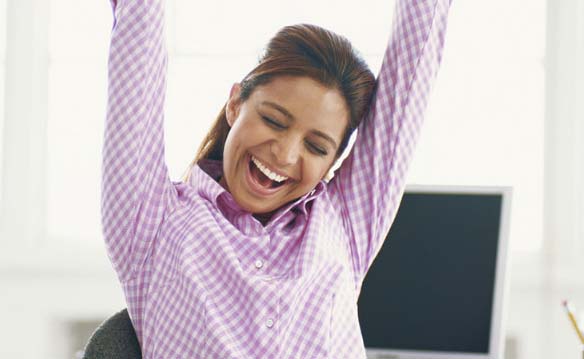 
True, this is not the job market of our dreams. But if you're a woman, at least you have a new edge. Women these days are more successful than they ever have been. They make up more than half of all managers and professionals in the U.S. and they are starting to take over a host of professions once dominated by men, such as doctors, lawyers, pharmacists and veterinarians.

Childless women under 30 in most of the country have a higher median income than their male counterparts, according to a census analysis by market researcher James Chung. (The women are "creaming" the men, are his exact words.) You should step out into the job market feeling confident. But before you do, here are a few critical skills to master.

1. Don't gush with gratitude (yet)

You get the call telling you that you got the job. You are so grateful that you accept immediately and start dreaming about the next-generation smart phone you'll be able to afford. Well...stop that. Economist Linda Babcock surveyed recent alums from her graduate program about their first jobs. It turned out that 57 percent of men had negotiated their starting salaries, while only 7 percent of women had. This meant that men started out with salaries 7.6 percent higher than the women's. Extend that out over a long career, and the men retire half a million dollars richer, which is the difference between a small apartment in a Miami suburb and a condo in Sarasota. So don't just gush with gratitude when you get a job offer. Do some research on the average salary range for that job. Think about what other perks you might want. And put on your game face.

It turns out that it really matters exactly how women ask for what they want. In a series of lab experiments at NYU and the Harvard Kennedy School, researchers showed subjects separate videos of male and female actors asking for something at work-say, a better starting salary.

A typical script goes something like this: "I think I should be paid at the top of the salary range. And I would also like to be eligible for an end-of-the-year bonus." When the male actor read the script, research subjects judged him to be strong, dominant and a decent colleague. When an actress read the exact same script, subjects tended to think she was pushy, unpleasant and, worse, they voted not to give her a raise.

This is deeply annoying and infuriating and very unfair. But it's also true. So what should you do? It turns out you should...

Thankfully, Babcock and some fellow researchers returned to this question of how to ask for a raise. What triggered people's suspicions, they realized, was the idea of women negotiating for themselves. They ran a few scripts until they landed on one that did not turn people off. The solution was not for women to back off or apologize or bake brownies for everyone at the office-that would only make them look weak and unworthy of power. It was for women to portray their own needs as aligned with the needs of the company.

A successful script was one that went something like this: "I don't know how typical it is for people at my level to negotiate, but I'm hopeful that you'll see my skill at negotiating as something important that I bring to the job." Women are supposed to be the big sisters, bossy but also always looking out for everyone else.

Again, having to walk this tightrope is annoying. The researchers themselves told me they wished they had reached a different conclusion, one that didn't require women to muzzle themselves quite so much. All I can say is, this period where women have to artificially restrain themselves should be temporary as we get adjusted to seeing more women in power-and slowly, over time, they will just be able to speak their minds.

This one isn't fashion advice but a success tip from the very successful. Sallie Krawcheck, a former top executive at Bank of America and Citigroup, told me even she got nervous when asking for a raise or something else she needed from her boss. To make it easier, she practiced in front of the mirror dozens of times, and in front of her husband. And she always wore a turtleneck on that day, because she tended to break out in a red sweaty neck rash when she was nervous. If there are parts of your body that will betray you-a twitch, a tapping foot, a nervous laugh-learn to disguise or deal with them. You need to appear communal and big sisterly, yes, but also utterly confident and in command.

5. Get the sock out of your pants

Before she became CEO of Hewlett-Packard, Carly Fiorina famously showed up to a meeting with a sock in her pants, to send the not so subtle message that she could keep up with the boys. Even back then, this move probably wasn't necessary, but today it would be downright counterproductive.

Our understanding of what makes a good leader is shifting to incorporate more traditionally feminine traits. The new model of effective leader is less army general and more soccer coach, someone who can inspire a team, collaborate and "walk in someone else's shoes with emotional intelligence and empathy," in the words of Julie Gerberding, who is now the President of Merck's vaccine division. Don't think of your girlish side as a handicap in the office, because nobody else does anymore.

One of the new power women we see in the papers these days, Christine LaGarde, Managing Director of the International Monetary Fund, once said the Wall Street collapse would have been much less severe if "Lehman Brothers had been a bit more Lehman Sisters." Remember this when you're going out there: The age of testosterone is over. You are the new rescue team.