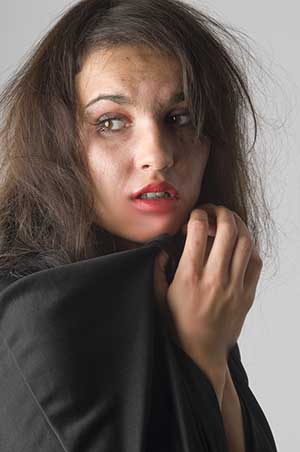 There are many reasons women remain in abusive relations, most stemming from fear - of the abuser, shame of society, of being alone, of disappointing someone, finances, children, etc. If you understand that reality is a simulation the true answer is they are programmed do so and no amount of help will freedom them until the experience ends.

If you are to look at life as a programmed simulation - this is their programmed experience which may initially sound ridiculous to you, but when you look at the number of abused women - and men - in relationship - who have the opportunity to leave and never do - then one day they wake up and GO - it makes more sense. This goes to free will, which is all part of the illusion, one that human consciousness is starting to unravel to see the truth. We experience as per our DNA genetic programming.

When you look at the way most humans live their lives, most of what they do makes little to no sense. Most people born to experience abuse also suffer from one or more mental illnesses as do their abusers. As a race, humans can be extremely abusive, and so the genetic patterns continue. It is all very sad, but is about to end when the hologram closes and Time ends.

Why abused women stay in bad relationships   CNN - February 10, 2013
This week, as the Senate decides whether to reauthorize the Violence Against Women Act and Valentine's Day approaches, it's worth noting that most domestic violence victims don't ask for roses, chocolate or federal funding. Instead, we have one simple wish: We want the abuse to end. We don't want the relationship to end.

This fact about "crazy love" surprises many people. How could you still love someone who has hurt you? The answer is as complicated as love itself. We victims tend to be hope junkies, open-hearted and optimistic. We believe that our loved ones are capable of change. Some would say we are na•ve. Others say we are too kind or too forgiving. Often we cannot find the courage to leave an abusive relationship until our life (or our children's safety) has been threatened.

When victims end an abusive relationship, the first thing we need is shelter. This is the No. 1 request made by victims who call the National Domestic Violence Hotline, the federally funded national helpline (1.800.799.SAFE). It is a practical request -- a roof over our heads. But it is also an emotional one -- the deep need to seek safety and to protect our children from danger.

Many victims know instinctively what friends and family usually don't: The most lethal time in an abusive relationship is after you leave. More than 70% of domestic violence murders happen after the victim has gotten out.

The second most common request also surprises people -- even in a town like Washington, D.C., with nearly 100,000 lawyers. Victims say that after immediate shelter, what we need most is legal advice and representation. Any woman who is going to turn herself from domestic violence victim to a domestic violence survivor needs this service. Read more ...

Alcohol consumption and mental illness can be co-morbid with abuse, and present additional challenges in eliminating domestic violence. Awareness, perception, definition and documentation of domestic violence differs widely from country to country, and from era to era.

Laws on domestic violence vary by country. While it is generally outlawed in the Western World, this not the case in many developing countries. For instance, in 2010, the United Arab Emirates's Supreme Court has ruled that a man has the right to physically discipline his wife and children as long as he doesn't leave physical marks.

The social acceptability of domestic violence also differs by country. While in most developed countries domestic violence is considered unacceptable by most people, in many regions of the world the views are different: according to a UNICEF survey, the percentage of women aged 15-49 who think that a husband is justified in hitting or beating his wife under certain circumstances is, for example: 90% in Jordan, 85.6% in Guinea, 85.4% in Zambia, 85% in Sierra Leone, 81.2% in Laos, 81% in Ethiopia.