Looking at Names From a Metaphysical and Social Perspective 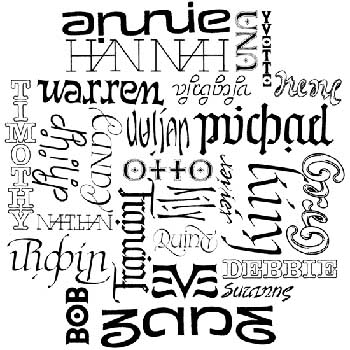 Do you like your name? Did you ever consider changing it? What name best describes you today?

Names carry frequency signatures and must fit the person.

From names to nick names it all means something.

In technologies we select a Brand or Name that defines who we are or what the company is about.

As a psychic I have found patterns in the names people select for their children. Many people use the same name over and over generation after generation - such as John, Mary, and other very popular names in history. I guess this goes to tradition, but it would reeve me crazy to have 3 people in the family with the same name. I know the solution is to attach a middle name - Mary Ann, Mary Lu, Mary Jane, etc. or use a nickname.

Here's another pattern I have found. I have rarely met a man named Bill who didn'tt drink a lot. The name Ray carries the frequency of emotional problems with 99% of my clients. (Sorry, don't men to offend).

In the Jewish religion, babies are named after someone who is deceased, using the first letter of the deceased person's name. So if the person who died was Morris, someone named after him - male or female - would have a name that started with the letter "M".

Every culture has patterns in their names.

Some families chose one letter of the alphabet and name all of their children with that letter.

The most popular letters I have found for first names are -- M, J, S, D, and R. It was almost like looking at the Wheel of Fortune TV game wherein I used to see the letters psychically. Today I see the first name and sometimes the second name as well, depending on the situation, as one's psychic abilities increase with use.

They have frequency and energy like anything else in this program, hence people who come into metaphysics often change their name to something that resonates better with who they believe they are becoming. It is a way to shed old bag that went along with the name and perhaps family energies they wish to extinguish.

When you hear mention of a person's name, your consciousness immediately begins to associate the name with a frequency and anyone you met in the past with that name. Further is searches for that name in a dream, another life and more, while you are unaware of what it is doing.

People on Twitter often change their names. This is true for other online social networking and virtual reality games.

My given name is Elinor Crystal. My parents named me after Eleanor Roosevelt who was the First Lady at the time I was born - 2/17/43. They believed I was powerful, would be special, and help people around the world just as she did. I never liked the name Elinor so everyone has always called me Ellie. Some people call me Crystal, but that is the wrong frequency. Some like El - a god-like signature - but to me I only resonant with Ellie.


Baby Names Reveal More About Parents Than Ever Before   Live Science - December 1, 2010
The names people choose to give their children communicate a wealth of social information - more so now than ever before. A new analysis of name statistics suggests that the meaning conveyed by a baby's name - that is, what a name tells others about the parents' tastes and background - has ramped up significantly over the last 25 years as baby names have become more diverse and numerous.

"We're in the middle of a naming revolution," said Laura Wattenberg, author of the popular book "The Baby Name Wizard" (Three Rivers Press, 2005) and creator of the website BabyNameWizard.com. "Parents are putting a much higher premium on distinctiveness."

"If you have 10 guesses to get somebody's name today there's almost no chance you'll get it," Wattenberg told LiveScience. "But 100 years ago, if you guessed the top 10 names you'd have a really good chance" of guessing correctly. But with these changes in naming trends come social implications.

"The more diverse naming styles become, the more we are going to read into somebody's name," Wattenberg said. She analyzed baby name statistics from the U.S. Social Security Administration to calculate a measure called Shannon entropy from the field of information theory. This measure is used to describe the information contained in a message - in this case, how much is communicated by the choice of a name.

The concept of entropy is associated with the disorder and chaos in a system (the second law of thermodynamics states that a closed system will always move toward higher entropy). Shannon entropy describes the relationship between how much disorder or uncertainty is associated with a certain variable, and how much information is stored in a message. The more diverse and uncertain the field of possible messages, the more information the message will contain.

Wattenberg calculated a sharp rise in name entropy over time. She found that this measure of the information carried by names has risen as much in the past 25 years as it did in the full century before that. (The measure is independent of the number of babies born.)

That means that meeting a baby named Mary today tells you a lot more about the girl's parents than meeting a baby with the same name 50 years ago would have. And the same goes for any name you can think of.

The sociology of names

Names communicate so much, because they often embody parents' values and tastes, as well as dreams and ambitions for their child.

"Sociologists love names," Wattenberg said. "They're practically the only case of a choice with broad fashion patterns that there's no commercial influence on. There's no company out there spending millions to convince you Brayden is a perfect name for your son." (Studies have shown that movies, celebrities and other cultural trends do have an impact on the popularity of certain names.)

To understand how the meaning communicated through names has evolved, Wattenberg suggests thinking about an office with a dress code requiring all employees to wear gray or blue suits to work every day. Seeing a man dressed in a blue suit in such an environment would tell you very little about that man's taste or personality.

Compare that to an office with no dress code. Here employees' sartorial choices vary widely, so the outfit worn by anyone in that office could tell you a fair bit about that person as an individual. In this case, the same blue suit might reveal significant clues about its wearer. The same goes for names. In an era where there are a lot more choices available, each choice carries more weight.

Jean Twenge, a professor of psychology at San Diego State University, called Wattenberg's work an "interesting analysis" and said, "It looks solid to me." Twenge, author of book "The Narcissism Epidemic: Living in the Age of Entitlement" (Free Press, April 2009), said the shift toward unique names was part of a broader social shift toward individualism in many aspects of our lives.

"It is much more common now for people to say, 'I want my child to stand out,'" Twenge said. "Naming a kid used to be an easier decision. Now you have to strike a balance in finding a name that isn't too popular, and isn't too weird." And the fact that everyone who meets a child will now be able to glean more information from his or her name just adds to the predicament. That means that parents-to-be who obsess over the choice of what to name their bun in the oven are justified in devoting hours to the decision. As Wattenberg wrote, "They're not just obsessive, they're responding to a new reality. I can prove it."

Seeds of a revolution

So how did names evolve to favor uniqueness over popularity?

Certainly the Internet is part of it. The social networking and easy communication with people beyond one's geographical local sphere means more sources of influence surround parents when deciding on a name. And with the rise of online user names - often based on a person's real name - comes an added incentive for that name to be one that no one else has.

"The idea of your name as a unique signifier that separates you from everyone else - that's a new idea," Wattenberg said. "Names never had to be unique. But today your name is often the first way and sometimes the only way people know you."

While it used to be enough to have a name unique to your neighborhood, now many parents are deterred if it's a name more than a few people in the world share. Yet Twenge stressed that the trend toward distinctive names started before the Internet became so important.

Statistics show the diversification of baby names began in the 1960s, at the same time that Americans started placing more emphasis on individuality and less on collectivity and fitting in.

Also, the advent of name statistics has undoubtedly shaped naming trends. The Social Security Administration has only recently made baby name data available. Before that, people had anecdotal reasons to think a given name was popular or scarce, but they couldn't be sure. Now every year the country's most popular names are ranked and released. "It's had a huge effect," Wattenberg said of the data. "There's a kind of reverse competitiveness that nobody wants to be number one."

And as much as people strive for uniqueness, ultimately humans are social animals that still want to fit in. "We all want to be different from each other, but our tastes are still as much alike as they ever were," Wattenberg said. "So the result is we have a thousand tiny variations on a theme. You get Kayden, Brayden, Hayden, Jayden."

Most Popular Baby Names in History