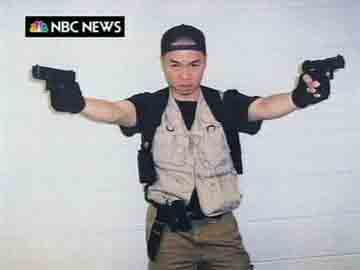 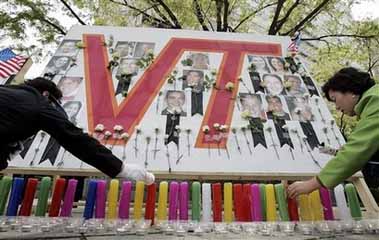 There are many reasons why people freak out -- fear, pain, frustration, mental illnesses left untreated, among others. In most cases, the signs have been there for years - the person's past history, the expression on their face, severe moods swings, those around them live in fear, isolation, among endless others ways we know they will have a total mental breakdown one day.

This is not new. Humans have always carried the gene for mental illness, as it is part of the genetic code for this reality experiment. We have come to look at the world as crazy, where souls search aimlessly for answers and if the mentally ill go untreated, especially those with rage disorder or psychosis, the result is an explosion of nuclear proportions, such as the events at Virginia Tech on Monday, June 16, 2007, and the incident at NASA four days later. Sometimes it is one individual who can no longer cope. Other times groups of individuals show us how dysfunctional our program can get, each with acts of terrorism to make their statement to the world, their pain and confusion self-evident.

If you out of control, don't wait for a holistic healer to save you. They might be able to help you understand and relieve some of your pain, but please see a psychiatrist, not a psychologist. Don't you want to understand who you are? You need to understand why you abuse, what your emotional problems and learning challenges are, before you can go any further. Incidents like the Virginia Tech Massacre are wake-up calls to the wounded souls, or to those who live under their control, who are too afraid to move on.

From there it is all about awareness and healing ... but alas, isn't that what our reality is all about? The Virginia Tech Massacre was indeed a tragic moment for those who lost their lives. Our hearts and thoughts go out to their families and friends as well as those who were there and need our prayers. As with those of us who experienced 9/11 first hand, we mourn, cope, wonder where it is all going, and for most, move on.

There are always those with mental problems, who experience these traumas and dwell in their aftermath forever, the incident, the tip of their iceberg with more mass shootings to come in the years ahead.

My friend, Linda, and I came to you for a reading a few years ago, from Blacksburg. We both were very near the tragedy at Virginia Tech on Monday. I work on the 3rd floor of Norris Hall, the building where the mass shootings took place. People in my office heard the shots and we were evacuated down the stairwell and then trapped as the shooter had chained the door shut, so we couldn't get out. At that moment, when we were facing the most terrifying reality that we were going to be hunted down and killed with no escape possible, I felt an angelic presence surround the 20 or so of us who huddled together. I KNEW we were going to be OK and just at that moment, someone in the group remembered that a room below us on the first floor had a door to the outside, if it hadn't been barricaded, too, we could get out. We did and took refuge in another building, which is where Linda works. We had been on the phone with each other at the time I was evacuated, discussing the earlier shootings and the possible higher implications of that. Little did we know what was unfolding at that exact moment. We are in shock and grieving with the rest of our community.

Mental illness generally surfaces at puberty, increases in the teen years along with learning disabilities (check family genetic code), and becomes full blown by age 19-20, with many teens dropping out and substance abuse the main menu (self medication). Bipolar disorder and other mental illnesses surface at that time.