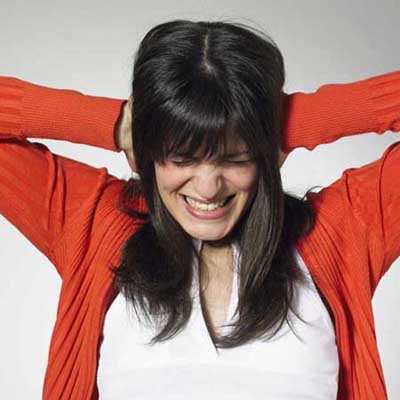 There are all sorts of noises that disturb us, from ringing in our ears that is generally tinnitus, someone snoring, loud music or conversations (sometimes on cell/mobile phones), different types of construction work, and the list goes on and on depending on your physical environment. Some people can shut them out, while others, with more acute hearing, can condition themselves to listen to the noise, creating stress and physical problems. (Remember, stress is what you want to avoid most... no matter what.) Are there any loud noises that bother you on a regular basis?

Next we have the unexplained noises that drive people crazy too. The Hum is one of the more popular sounds that remains unexplained and is not just limited to Taos, but is a global event as there are all sorts of sounds emanating from beneath the planet.

The Hum is a generic name for a series of phenomena involving a persistent and invasive low-frequency humming noise not audible to all people. Hums have been reported in various geographical locations. In some cases a source has been located. A well-known case was reported in Taos, New Mexico, and thus the Hum is sometimes called the Taos Hum. Hums have been reported all over the world, especially in Europe.

A Hum on the Big Island of Hawaii, typically related to volcanic action, is heard in locations dozens of miles apart. The local Hawaiians also say the Hum is most often heard by men. The Hum is most often described as sounding somewhat like a distant idling diesel engine. Typically the Hum is difficult to detect with microphones, and its source and nature are hard to localize. The Hum is sometimes prefixed with the name of a locality where the problem has been particularly publicized: e.g., the "Bristol Hum" or the "Taos Hum".

An article by Greg Long for Northwest Mysteries reports on strange sounds seemingly coming from underground in the south-central region of the state of Washington. Those who have heard the mysterious machine-like sounds, including loggers, liken the noise to "several large turbines" starting up and running, or a "loaded truck pulling up a long hill and never reaching the top." The article also examines similar noises reported in England, Italy, Colorado, Texas, Puerto Rico, New Jersey, California, and other states. Among these accounts are what sounded like underground drilling and construction work, motor-like sounds, or generators. Explanations? Long wonders if the noises can be attributed to seismic activity and speculates on the correlation with sightings of UFOs sometimes reported in the same areas.

In January, 1999, a loud boom at 12:15 a.m. disturbed the residents of Colorado Springs and Denver. Some witnesses said the noise was accompanied by a flash of light in the sky. There was no electrical storm. Although it could have been a sonic boom, the military denied any military activity in the area.

On January 10, 1999, dozens of people in Fairfield, Ohio reported a stunning, explosive sound. No cause was ever discovered.

Thousands of homes were rattled by two huge, mysterious booms 30 miles southeast of Los Angeles just before 10 p.m. in May of 1998. Residents described the sounds as explosions, earthquake noises, and thuds. The two booms occurred about five minutes apart.

Two very loud skyquakes startled hundreds of people on the beaches of Ocean City, Md. on July 30, 1998. No planes were in sight, and the sounds seemed to be coming from some miles offshore.

A mysterious boom reverberated through Narragansett Bay, R.I. on August 1, 1998 at 9:30 p.m. Investigating officials could not find the source of the noise.

On Sept. 16, 1997, the campus of the University of North Carolina at Chapel Hill was rocked by a boom that shook the ground and registered 1.1 on the Richter scale. Readings from ground-monitoring equipment showed that the energy did not come from the air, ruling out a sonic boom.

On December 17, 1997, a huge aerial blast rattled windows and blew open storm doors in Rogersville, Mo., a town 13 miles east of Springfield. Again, the Air Force denied the possibility of a sonic boom caused by one of its aircraft.

The article below from New Scientist is just one current example of tones in space. We also find unexplained tones/harmonics emanating from black holes, but most importantly from the center of the Milky Way Galaxy, which signals the closing of the program. Some may be subliminal, to be physically heard later, but these tones do exist for a purpose, as all is created by harmonics, and help adjust frequency grids at that end. 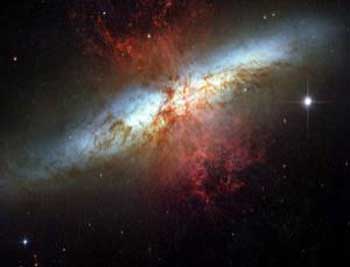 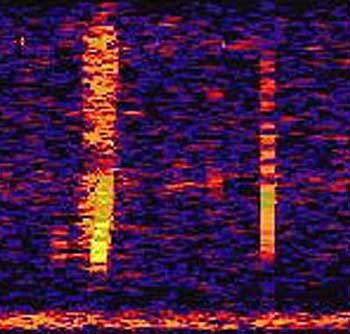 
What created this strange sound in Earth's Pacific Ocean? Pictured above is a visual representation of a loud and unusual sound, dubbed a Bloop, captured by deep sea microphones in 1997. In the above graph, time is shown on the horizontal axis, deep pitch is shown on the vertical axis, and brightness designates loudness. Although Bloops are some of the loudest sounds of any type ever recorded in Earth's oceans, their origin remains unknown.

The Bloop sound was placed as occurring several times off the southern coast of South America and was audible 5,000 kilometers away. Although the sound has similarities to those vocalized by living organisms, not even a blue whale is large enough to croon this loud. The sounds point to the intriguing hypothesis that even larger life forms lurk in the unexplored darkness of Earth's deep oceans. A less imagination-inspiring possibility, however, is that the sounds resulted from some sort of iceberg calving. No further Bloops have been heard since 1997, although other loud and unexplained sounds have been recorded.