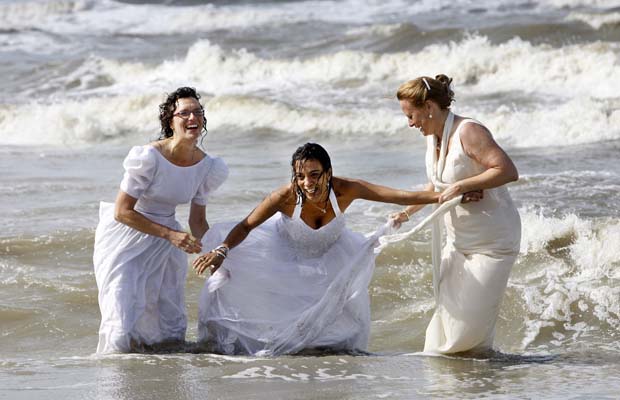 Trash the Dress made the news today after tragedy struck.

Trash the dress, also known as fearless bridal or rock the frock, is a style of wedding photography that contrasts elegant clothing with an environment in which it is out of place. It is generally shot in the style of fashion and glamour photography. "Trash the dress" is the art of destruction or deconstruction of a brides wedding dress to create a new "artwork" that the bride would be proud to display on their wall. This new "masterpiece" is formed in the creative destruction of the dress. This will normally be portrayed in a sequence of images or simply a single image.

Some sources claim that the trend was originally started in 2001 by Las Vegas wedding photographer John Michael Cooper. However, the idea of destroying a wedding dress has been used in Hollywood symbolically since at least October 1998 when Meg Cummings of the show Sunset Beach ran into the ocean in her wedding dress after her wedding was badly interrupted. Since then the style has spread around the world and most notably in the UK, with photographers like Steve Gerrard and Mark Theisinger, amongst others, shoot their unique ideas of Trash the Dress.

Brides are increasingly expecting more from their weddings photos, and trash the dress is an example of these expectations. Brides and grooms want to feature in the art on the walls of their homes. A model often wears a ball gown, prom dress or wedding dress, and may effectively ruin the dress in the process by getting it wet, dirty or in extreme circumstances tearing or destroying the garment. It may be done as an additional shoot after the wedding, almost as a declaration that the wedding is done and the dress will not be used again. It is seen as an alternative to storing the dress away.

In a Mass Trash The Dress event September 9, 2009 more than 150 women wore their wedding dresses once more and were pictured on a beach in Scheveningen, Netherlands. Fine art photographer Melanie Rijkers (MeRy) initiated the act after she found out about the American phenomenon on the internet. First mass Trash The Dress: 08-08-'08. Future dates: 10-10-'10, 11-11-'11 and 12-12-'12. A mass Trash The Dress event was held in Adelaide in South Australia 6 February 2011. Huffington Post Divorce blogger, Joelle Caputa, began seeking women to interview for her book "Trash the Dress: Stories of Celebrating Divorce in your 20s" in June 2011. In November 2011, she trashed her wedding dress during a photoshoot on The Style Network show, Glam Fairy.

On 26 August 2012, during a photo shoot in Canada, a 30-year-old Montreal bride drowned when the dress she was wearing dragged her downstream. The photographer, as well as others, tried to help but were unable to rescue her. Her body was later recovered by a scuba diver.