Thunderbolts of the Gods


Our souls forever send us messages and clues of remembrance, most seen as archetypical patterns, part of a Grand Design. They remain, challenging us, until we discover their meaning. For me another long time unexplained archetype came clear on Monday, and once again linked to Z in his various roles - right down to the z-pinch..

My oh my ... Look what the archetype represents ... 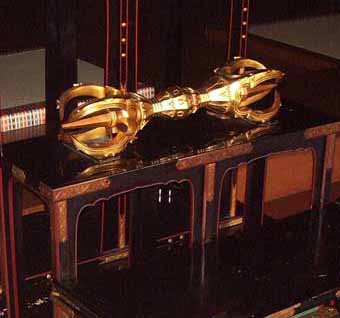 The Ancient Thunderbolt of the Gods

Held Vertically: Above and Below - Hourglass Effect

Checking the metaphors from the article...

In the old religion of Vedic India, the vajra was the powerful thunderbolt wielded by the storm god Indra in his momentous combat with the dragon Vritra. Such myths, of course, were rife in the ancient world, but what is striking is that Buddhist cultures still worship the lightning today on a massive scale, with entire sects and branches of theory devoted to its study. The above are modern examples of the kongo, the Japanese name of the object, as the central object of veneration in temples in modern-day Kyoto and Kagawa, both in Japan.

Ancient mythological traditions are full of sacred weapons employed in the battles of the gods with demons and dragons. Like Indra, Zeus resorted to his famous keraunos to defeat Typhon and the Biblical Yahweh subjected Leviathan or Yamm with a similar device. But what is it about the vajra and its counterparts in other cultures that guaranteed its persistence as a powerful theme even into the modern era?

No doubt the crucial factor here is the cosmogonic role of the weapon: more than the relatively modest lightning experienced today, the mythological thunderbolt possessed cosmic dimensions and played an essential part in the 'creation of the world'. In ancient parlance, to subdue the dragon was to lay the foundations for the formation of the earth.

The peculiar form of the vajra, which is quite unlike the usual type of lightning, is fully explicable as a manifestation of the visible world axis during one of its most complex phases. As the Indologist, Govinda, has explained, the little sphere in the centre represented the 'seed' or 'germ' from which the universe was thought to have arisen and the two Ôlotus blossomsŐ at the opposite ends symbolized the poles of the universe connected by the central axis mundi.

Lightning is one of the primary manifestations of plasma in the ionosphere and the atmosphere of the earth. It is intriguing, therefore, that the complex morphology displayed in the vajra and other ancient forms of the thunderbolt is matched by laboratory experiments involving a high-energy z-pinch plasma discharge. This striking convergence poses the question if ancient societies could have correctly remembered some of the most complex stages of a real display of plasma in the sky: an enhanced aurora such as the one recently proposed by plasma physicist Anthony Peratt could well have produced just such a display.